A Heap Of A Problem

A Heap Of A Problem 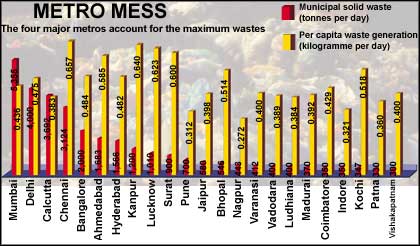 Thirty two-year-old Mannoj Ahuja has been living in Janakpuri colony in west Delhi for the last eleven years. He is part of a group of residents who literally live in a lane overflowing with garbage. The stench of rotting wastes and stray dogs rummaging through them, their bodies sullied with muck, serves as a constant reminder of the helplessness of their situation. The problem is so acute that they have even started taking another, longer route to access the main road.

This is a common sight in many residential colonies. If nothing else, Indian cities have a striking similarity when it comes to heaps of garbage and overflowing bins - a sign of the municipalities' inefficiency in managing soild waste.

Solid waste management (swm) involves managing activities associated with generation, collection, transport and disposal of solid waste in an environmentally-compatible manner, adopting principles of economy, aesthetics, energy and conservation. But that the Urban Local Bodies, the official managers of solid waste, are not doing their job is apparent.

With the country's population set to cross the one billion mark, coupled with unplanned development and urbanisation, one thing is for certain - an enormous amount of waste is going to be generated. The situation is no better at present. The urban population was 217 million in 1991 and the total quantity of solid waste generated in urban areas was estimated at 20.71 million tonnes per year. This is expected to cross 56 million tonnes by 2011. Says Iqbal Malik, director, Vatavaran, a Delhi-based non-governmental organisation (ngo) involved waste management wastes, "In the 1980s, a family's weekly garbage production used to be about 7 kg. Now it is 20-30 kg." The per capita waste generation in urban areas also varies according to the size of the population. In urban areas with a population less than 0.1 million people, the per capita waste generated is 0.21 kg per day, while in areas with a population of more than 5 million people, it goes up to 0.5 kg per day, says a study by the Nagpur-based National Environmental Engineering Research Institute (NEERI),

According to a Central Pollution Control Board survey, the total quantity of solid waste generated by 23 large cities in the country is of the order of 30,058 tonnes per day (tpd). Mumbai generates the maximum with 5,335 tpd and Vishakapatnam with the least at 300 tpd (see table: Metro mess). "The composition of garbage has also changed over the years," says Malik. "We now have the culture of using disposable articles, which we can use and throw away. Thus, there is every kind of waste and this has added to the problems," she adds (see box: Waste content).

The problem of solid wastes, however, is not just limited to large cities. It has also seeped into small towns. The once-beautiful towns of Shimla, Jaipur and Bangalore have open bins and overloaded dumpyards in plenty. Says H V Ganla, who has been practising waste management techniques in his nursing home in Pune, "In large cities, we have some sort of knowledge regarding waste management. This is totally missing in small towns or peri-urban areas."

SWM services, especially to poor communities, is deplorable. "In most urban areas, the services have not been structured to cover urban slum encroachments. They are thus left to themselves," says the June 30, 1998 Interim Report filed by the Barman Committee instituted by the Supreme Court. The committee was set up to look into the aspects of swm in urban areas following a public interest litigation filed by Almitra H Patel of Bangalore. A neeri study also pointed out that municipal agencies spend about 5 to 30 per cent of their budget on swm but serve only a portion of the urban populace.

The management of solid waste is an obligatory duty of municipal bodies but they have failed to make adequate provisions. "Solid waste is handled, transported and disposed of in an absolutely unscientific manner. Nowhere is 100 per cent of the waste collected," says A K Saxena, director (environment), National Productivity Council, New Delhi.

"The apathy of the decision-makers is primarily responsible for the poor level of SWM services in the urban areas," concludes the report.