Developing nations should get more actively involved with international politics on climate change. They should propose and direct negotiations, rather than just react and respond 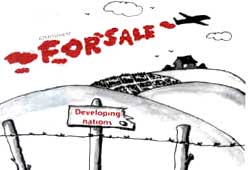 CLIMATE negotiations and international climate policy are very recent compared to other policy issues. Thus, one cannot expect all problems to be solved at once. While the question of efficient mitigation is dealt with prominently in the Kyoto Protocol, the inequitable distribution of current emissions is widely taken for granted. This may change in the future as climate negotiations will go on for decades to come and finally resemble international trade negotiations where small steps are taken at a time but cumulate in the long run. A combination of an equitable allocation of entitlements and a globally accessible free market in emission permits would reduce greenhouse gas (GHG)emissions at minimum cost while guaranteeing trade facilities to the developing countries as well as safeguarding their right to development.

In the run-up to Kyoto, expectations were subdued. An e-mail survey administered by the Global Environmental Change Report found that two-thirds of the respondents expected no more than stabilisation of emissions by industralised (Annex I) countries. So theoutcome was a major surprise. There might have been no protocol at all if one considers the extreme divergence of opinions. Obviously, a lot of space still exists in the various provisions of the protocol but reaching a consensus on these provisions will be an arduous task in the months and years to come. Therefore, an overall evaluation of the protocol at present is difficult.

Some provisions which can be unequivocally labelled as successful are;

• an overall reduction figure much higher than anticipated;

• the acceptance of flexibility mechanisms;

• inclusion of the long-lived GHG; and

• the set-up of an adaptation fund in the framework of the Clean Development Mechanisms (CDM).

Some major problems which needed to be addressed but did not arise are:

• use of "hot air" from countries in transition;

• uncertainties in the measurement of some GHGs;

• build up of exceptions benefiting specific countries (exemption of single projects, net emissions, choice of base years); and

• lack of a clear definition of emissions trading and artificial differences between Joint Implementation (JI) and CDM.

Careful negotiations can eliminate many of these problems. Open questions on sinks and net emissions issue could be clarified by commissioning a special report of the Intergovernmental Panel on Climate Change (IPCC), an independent and technical body under the sponsorship of United Nations Environment Program and World Meteoro-logical Organisation. Differing degrees of uncertainties could be prevented through insurance or discounting rules. A single project exemption should not be granted in a system where emission permits can be bought easily. A unified base period could be used for the next commitment period, JI CDM and trading could be brought in line by extending the adaptation tax to JI and trading. It must also clarify that after verification and certification no difference is made between from JI, CDM and trading permits. Major flaws of the protocol are:

• lack of an objective to set differentiated commitments for future commitment periods (such as contraction and convergence or the Brazilian proposal). This is absolutely critical for the future;

• lack of a sanctions regime in case of non-compliance;

• the 55 per cent Annex I emissions hurdle before entry into force giving the US a de facto veto power. As the domestic US debate is very defensive, that might sink the protocol;

• an overly long interim period not conducive to early action. Problems also arise out of early crediting as this might lead to distortions; and

• the last-minute deletion of Article )0 allowing developing countries to take up commitments.

Like the Montreal Protocol on ozone-depleting substances, the Kyoto Protocol is the first of a long row of steps to be made to reach the climate convention's ultimate target of stabilising GHG concentrations to a non-dangerous level. While the power of the industrial countries makes it unlikely that an equitable initial allocation of entitlements will be granted, the allocation could be gradually changed from a grandfathering approach to a per capita approach. Developing countries should therefore step up their pressure for a contraction and convergence approach that gradually leads to an equal per capita allocation of emission budgets, for instance, by 2050. A gliding 20 per cent reduction compared to the 1990 level in industrial countries by 2020; 40 per cent reduction by 2030 and 60 per cent by 2050 could be a suitable path. Taking into account the accumulated emissions of industrial countries, at least since 1980 when global warming became a relevant subject of scientific and political debate, an additional reduction could be distributed over a century.

Emissions trading in all of its forms is a crucial element of a truly global climate policy. However, it has to be armed with appropriate sanctions to prevent fictitious reductions. In the short run, the CDM should be drafted in a way developing countries can benefit from trading. Thus, countries should be free to create certified emission reductions even without foreign investors and sell them in the market provided there are strict international rules for project baseline determination and independent verification. Full participation in the other forms of emission trading should only be possible if a country accepts a commitment.

Alex Michaelowa is project leader for climate policy at the Institute of Economic Growth, Hamburg, Germany