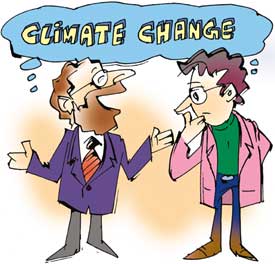 The early civilisations have conventionally been regarded as products of human ingenuity. Of course, favourable geographical conditions also made a difference. But they just might be fortuitous by-products of climate change, according to a recent University of East Anglia study. The findings were presented on September 7, 2006, during the British Association's annual Festival of Science in Norwich. The study holds that climate change diminished natural resources and forced people who had hitherto led a nomadic life to settle in areas with abundant water and productive land.

The University of East Anglia researchers link climate change to changes in rainfall pattern. They contend that climate change, driven by natural fluctuations in the Earth's orbit, caused a weakening of monsoon systems. This made many parts of the world arid. Consequently, natural resources became scarce and people were forced to move to wetter areas.Diverse groups came together to form the first large urban, state-level societies, the researchers say.
"Civilisation did not arise as result of a benign environment which allowed humanity to indulge a preference for living in complex, urban, 'civilised' societies," says Nick Brooks, lead researcher at the University of East Anglia.

"What we tend to think of today as 'civilisation' was in large part an accidental by-product of unplanned adaptation to catastrophic climate change," said Brooks. "That is, civilisation was the last resort a means of organising society and food production and distribution, in the face of deteriorating environmental conditions," added Brooks. It means that without dramatic changes in the climate thousands of years ago, we might have remained cultivators and hunters.

The research was largely based on analysis of archaeological remains of the Garamantian civilisation in southwestern Libya. In that region, civilisation emerged in the wake of changing rainfall patterns around 3,000-5,000 years ago. The same logic explains early civilisations of Egypt, Mesopotamia, Indus-Saraswati, China and northern South America that were founded between 6,000 and 4,000 years ago.
However, everyone does not agree with the University of East Anglia researchers. According to Benny Peiser, a social anthropologist at Liverpool John Moores University, uk, "It was the inception of the ice age or lowering of temperature, which led to collapse of many societies, not warming." He agrees that arid conditions like desertification of the Saharan region 7,000 to 5,000 years ago led to the foundation of complex 'urban civilisations' along the Nile, Euphrates and Tigris rivers.
Whether climate change had led to civilisations or their collapse thousands of years ago, increased human population and depleted resources may cause coming climate changes to have a much greater impact now. Past societies could have migrated to unaffected areas, but experts reckon that such large-scale migration is going to be very difficult in current times.

Brooks admits that the study challenges the widely held belief that the development of civilisation was simply the result of a transition from harsh, unpredictable climatic conditions during the last ice age, to more benign and stable conditions at the beginning of the Holocene period some 10,000 years ago. The University of East Anglia research also suggests, rather contentiously, that civilisation is not the natural state of human societies, but the unintended consequence of adaptation to climatic deterioration.

"Having been forced into civilised communities, people found themselves faced with increased social inequality, greater violence in the form of organised conflict, and at the mercy of self-appointed elites who used religious authority and political ideology to bolster their position. These models of government are still with us today," said Brooks.