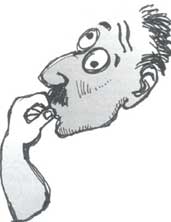 ANIL AGARWAL has raised many important points regarding the status of India's forests with reference to the SFR 1995 by the PSI and the FAO's assessment for 1980 and 1990. The paper commends PSI reports for their transparency and accountability but they may not help much in learning about the true status of forest cover in the country.

The PSI has published its reports every two years, starting from 1987. The PSI was created in 1981 from the Preinvestment Survey of Forest Resources (PISFR), which started in 1965 with United Nations Development Programme aid. The PISFR surveyed 'unsurveyed' but potentially important forest pockets having rich timber resources. It used aerial photographs and low-intensity cluster sampling techniques to assess growing forest stock. Satellite imagery soon became the main tool. The FSI started its biannual assessments from 1983. It used the previous two years' imagery for this purpose (see table. Green wealth).

It was understood that the satellite imagery was a quicker method compared to interpretation of aerial photographs. However, as in Landsat satellites, the resolutions were rather poor (from 89 sq in Landsat I to 36 sq in thematic map- ping) for a very detailed assessment. As it was not possible to identify species/species groups, a classification system based on crown density of visual canopy was adopted. A forest cover of 40 per cent and above was taken as dense forests, 10-40 per cent as open forests, and below 10 per cent as scrub forests.

But there were many constraints apart from resolution in this method. These include cloud cover, shadows of high hills, seasons (important in broadleaved deciduous forests that shed leaves in certain seasons), skill of interpreter, accuracy of delineation of different density classes and also in transferring details on base as well as final printing. Loss of maps information and misinterpretation were common. Digital interpretation, however, has improved this to some extent.


There are hardly any undisturbed forest areas left in India, including the Andaman and Nicobar islands. Almost all dense, natural forests are now under protected areas - wildlife sanctuaries, national parks and reserves. Felling in natural forests has been officially stopped since 1987. However, unofficial removal by headloading as well as by organised groups (as in Uttar Pradesh) and for nistar (rights over minor forest produce) in Madhya Pradesh and Maharashtra, contributes greatly to depletion of forest resources and remain unrecorded. There was a significant decrease in forest loss (rather forest land loss) since 1984 after the Forest (Conservation) Act (FCA), 1980, was strictly enforced.

Natural forests are exposed all through and are constantly abused and overused. Grazing by domestic cattle has not only depleted the growth but has hindered the natural regenerative process. Whatever grazing control existed a decade ago has been lost due to political expediency. Paucity of funds for 'normal' forestry operations - sanitation, boundary maintenance or protection - has been the main constraint in maintaining forest estates in India.

It is not always true that dense forests represent all natural forests. Many mature plantations do get denser and get included as dense forests. Satellites record tree canopies but do not say where they are located and how they are formed.

Deforestation is more in dry, deciduous forests (they are more logged!) - more than 80 per cent of India's forests are in dry and moist deciduous categories and contain very valuable timber species like rosewood, ain, dhauda and teak.


"Working plans (WP) do not actually work," say environmentalists. The FAO, however, says "By and large, prescriptions of WP are adhered to". Both are correct. WPs were made to prescribe a harvesting (logging) cycle of 10-15 years. They were the fundamental tools to 'manipulate' forests to change them from local natural, mixed, miscellaneous forests to the forests of desired timber species like deodar, sal or teak. I have always held the view that conventional WPs have lost their relevance in the present context. This is also evident from the fact that wildlife-protected area plans are now called 'management plans'. Same is the case with JFM areas. WPs will work if they change their objectives to fit the National Forest Policy of 1988. Very little has happened towards that end, except that WPs are written and sanctioned by states in consultation with the MEF after 1980. Guidelines issued by the MEF in 1984 are important from the conservation point of view, but have been lost sight of after the FCA amendment in 1989. Having dealt with the discrepancies and macro-level pictures of FSI reports, I will now deal with many suggestions made in the paper. I fully endorse Anil Agarwal's statement that good data collection mechanisms are needed for assessing the forest cover of India. India's latest satellite, IRS- I C, with up to six metres resolution in PAN, and IR*- I D with the Global Positioning System, would become powerful tools. They will give more detailed density and degradation assessments. But to assess the extent of all plantations, pristine pockets of forests, legal and administrative boundaries, field surveys alone will help. The FSI and the states will have to work together for this in a systematic manner. Forestry will also need adequate funds and political support. Only then can the SFR become a 'tool of enlightenment and intelligent decision making'. Till then, the FS1 will continue to give a 'gross picture' of change in forest cover.

I agree with Anil Agarwal in his evaluation Of JFM, social forestry and the fact that the FSI-SFR gives something candidly, but not all that is desired. I have no comments on the FAO assessments of 1980 and 1991 and I have not read either. But I feel FSI-SFR's and FAO's assessments differ because of their 'different angles of looking' at India's forests.

Satellite imagery, a quicker method than interpretation of aerial photographs, suffered from many constraints like loss of information and misinterpretation. Digital interpretation, however, has improved this to some extent

There are hardly any undisturbed forests left in India. Almost all dense, natural forests are now under protected areas

Natural forests are exposed all through and are constantly abused. There exists little grazing control due to political expediency. Paucity of funds has been the main constraint in maintaining forest estates in India

"Working plans (WP) do not actually work,- say, environmentalists. The mo, however, says, "By and large, prescriptions of WPs are adhered to-- Both are correct. Conventional WPs have lost their relevance in the present context

WPs will work if they change their objectives to fit the National Forest Policy of 1988. Very little has happened towards this end

Good data collection mechanisms are needed for assessing the forest cover in India. The Forest Survey of India and the states will have to work together for this in a systematic manner. Only then can the SFR become a 'tool of enlightenment and intelligent decision making'
- A R MASLEKAR