Catch rain where it falls. No one knew it better than the people living in Mandu, a hill-fort town in Madhya Pradesh, 1,400 years ago 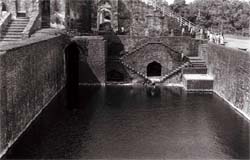 in the hill-fort of Mandu, Madhya Pradesh, lie the ruins of a 1,400-year-old civilisation ruled by numerous dynasties, including the Mughals. Cocooned in these ruins, at 633.7 metres above sea level, is also a sophisticated and need-based water harvesting system. Devoid of groundwater, the hill-top town depended on rain for water supply throughout the year. The system comprised more than 1,200 water tanks, catching rainwater and supplying it through channels to the entire fort. Today, all that remains of the system are a few tanks and the main water passages carrying water to different dwelling sites.

Retracing the system in the ruined monuments is like cruising in the labyrinth of time. Old-timers and guides are your navigators. The Archaeological Survey of India, the so-called keeper of India's heritage sites, has come out with a tourist guide of Mandu. But it does not talk about the ancient wisdom that made Mandu a prosperous town. Nor is there any effort to document the marvels of this water harvesting system.

There are 70 monuments in this fort town which are accessible. But traces of the ancient water supply system can be found only in five of them. In these five monuments, there are about 700 small and big water tanks.
Each and every monument had its own system of supplying water depending on the architecture. There was a main water tank which served as the catchment area. It was usually 20 to 30 feet deep and the width depended on the requirement of the respective dwelling. Water from the main tank was carried inside the building in two ways.

Firstly, through underground channels directly linking the main tank to the small cisterns inside the building.

Secondly, water was transported to the building through roof-top tanks. Using a pulley system mounted with silver baskets and manned by two people 24 hours a day, water was transported to roof-top tanks (located at the top of the wall). These tanks were in turn connected to pipes inside the pillars of the monument. Through these pipes, water was supplied to the entire building for domestic, gardening and various other purposes. The pillars were interconnected, hence water flowed throughout the building.

In between buildings and inside buildings there were many cisterns where water from the main tank was stored and again channelised to other rooms inside. These cisterns worked as step-up transformers for water transportation. It worked as stopover for the water thus creating force for further channeling of water smoothly. Around such cisterns were built rooms which are used during the summer. The water kept the room cool.
One of the most elegant monuments in Mandu, the Jahaz Mahal (ship palace), still has traces of the water supply system. It is another matter that one has to connect all of them logically to picture the system.

The palace is located between two tanks, Munj and Kapoor, which have a total capacity of 25 lakh litres. The ground floor of the palace has three large halls with corridors in between and narrow rooms at the extreme ends. There is a beautiful cistern near the northern hall which is connected by a water channel from a roof-top tank placed on the first floor of the palace. This tank, now ruined, used to store 54,000 litres of water. The 150-feet-long channel passes through hollow pillars at some places.

The cistern, which was mainly used for bathing purposes, is also connected by a serpentine water channel. The channel was deliberately built in such a way to allow water to flow sluggishly for a "royal bath". For the convenience of non-swimmers, a flight of steps up to the water level was constructed in one of the sides of the cistern.

The Munj and Kapoor tanks were interconnected through an arched underground channel, which exists even today. As the rainfall was not equally distributed and the terrain was undulating, the water level in the two tanks was not always equal despite the underground balancing system. So a causeway between the tanks was laid out at the water level. These two channels ensured equal distribution of water between the two tanks.

To meet the drinking water requirements, there are two wells called Ujala and Andheri Baolis (bright and dark wells respectively). The bright well is in the backyard of the Jahaz Mahal, while the dark well is inside the palace itself. The 265-feet-deep Ujala well has two flights of steps leading to water level. There are a few pillars and landings inside the well for the convenience of water carriers. There is also a pulley system in the well. It is believed that bullocks were used to operate the pulley.

The Andheri well was used more as a cooling plant for the rooms in the palace. Besides, there are three tunnels which connect the well to the royal bathroom called Hamam Ghar. The first passed above a cooking stove for hot water. The second tunnel was meant for steam and the third supplied cold water

Sadly, the knowledge has died with the fort. Its revival seems distant. The new inhabitants of Mandu still depend on rainwater. In summer months, the town suffers from an acute shortage of water. A single water tank now supplies water to the 40,000-odd residents. But the long queue in front of a water point near the Jahaz Mahal is oblivious to the age-old tradition of water harvesting that made this hill-top town prosperous centuries ago.