A year after Kalinganagar firing, tribal India refuses to shine

A year after Kalinganagar firing, tribal India refuses to shine 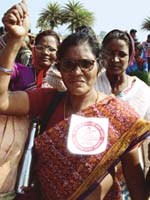 Driving to the Kalinga Nagar Industrial Zone to commemorate the first anniversary of tribals killed during a protest, stone crushers line the newly paved highway. Women, children and men wield hammers under a hot sun, shattering stones. The wage is Rs 40-Rs 60 per day, some work at least for those pushed off the land to make way for industry. Around 50 mous for steel plants in the industrial park have been signed so far, including giants such as South Koreas's Posco.

The adivasi gathering has a background. In January 2006, Tata's bulldozers moved into the community's paddy fields and local inhabitants met them with axes and bows. The result was a battle; twelve tribals and a policeman were killed. One more tribal died subsequently. Local leaders blockaded the road from Daitari to Paradip that runs through their territory, an hour and a half by car from state capital Bhubaneswar.

This rasta roko (applied to trucks) has lasted for over an year. Only one of the 13 families has accepted the compensation (Rs 10 lakh) offered by the government, five times larger than usual in cases of work or traffic deaths.

At the commemoration, a monument was inaugurated, 13 simple stone pillars, where the dead were cremated. About 8,000 people demonstrated, local and from elsewhere, some under the auspices of Marxist parties and the All India Kisan-Mazdoor Sabha. Their demand is adivasis be given rights over mineral resources, land, water, forests and industry in tribal areas. Reports in newspapers, that the ceremony would be taken over by Naxalites, probably discouraged visitors. We had to pass through a security check and hand over our passports en route to the site. The car behind us was turned back.

The anniversary at Kalinganagar is simply the latest in a series of ongoing conflicts between two sides one favouring extractive industrialisation, led by the government, and those opposed. Three people were shot by police during another rally in Maikanch in 2000 protesting a bauxite mine project (of Alcan and Utkal Alumina), and heavy police repression has also been alleged in Lanjigarh near the proposed Niyamgiri bauxite mine.
As the Indian economy grows, the material flows into and out of the economy will grow as well. India is importing oil and gas, and such imports will increase. But she is largely self-reliant on her own resources of coal, whose extraction is increasing rapidly. Electric power also comes from dams that displace many people. There is also a large increase in materials for housing or building infrastructures, such as sand and stones. There is a rush for metal ores, either for internal consumption or exports, Bauxite being a main one.

This is the context of the clashes over land use in Orissa and other states. The "commodity frontiers" to fuel the urban consumption are reaching into adivasi areas, while appropriation of agricultural land for large industrial parks is provoking conflicts (like in Singur and Nandigram in West Bengal in December 2006 and January 2007).

In mining, the land for open cast mines, depositing waste, or road and rail infrastructure is even larger than for industrial parks. India sees itself as an aluminium and iron or steel exporting country. And to achieve Western-style industrialisation, the axe has fallen disproportionately on the lower caste and tribal communities. Adivasis are 8 per cent of India's inhabitants, yet 40 per cent of the displaced population.
This clash is nowhere as palpable as in Orissa. One of India's poorest states, it has about 97 per cent of the chromites, 71 per cent of the bauxite, 33 per cent of the iron and 32 per cent of the manganese resources of India.

As commodity prices soar, international companies covet this mineral bounty, much of it located underneath tribal territory.

Signs of industrialisation are everywhere in Orissa. Eucalyptus plantations intersperse indigenous forests, trains full of coal rumble past, and road accidents between cows and cars are on the rise. Coal power stations, sponge iron factories and alumina refineries belch out smoke, dust and flaring gas, illuminating thatched roofs of villages below, targets of displacement. The otherworldliness of intrusion only increases at night a refinery casts its glow on villages that never had electricity.

A few days close to the realities of the bauxite mining industry and heavy industry in Orissa makes one aware of the inanity of neo-classical economics based on the idea of "compensating externalities". Mining and industry cause damage to people and the environment that are not factored into the companies' costs. People at the receiving end, should they have clear title to their land and sufficient bargaining power, could demand compensation. The companies would pay such compensations out of the profits they make. So far, so good. But the situation on the ground is very different.


Environmental conflicts are fights over titles to resources. In practice titles are not clearly established. Beyond legal entitlements to private and communal land, property rights on the environment are contested. Under the Fifth Schedule, tribal areas cannot be sold to private investors, but the government may allege public interest requirements. The Samatha court decision of 1997, which forbids appropriation of indigenous land by non-tribal persons including private companies, seems to protect tribal areas. But the Orissa government does not recognise its validity.

Thus, in practice, the government expropriates land for a "public purpose", pays far below cost price, and resells it to corporations for a tidy profit (still below cost price). For example, in Kalinganagar, according to the People's Union for Civil Liberties, the Industrial Infrastructure Development Corporation of Orissa purchased land from people at Rs 15,000-Rs 30,000 per acre (.4 hectare), later adding an ex-gratia amount of Rs 25,000. It then resold to the Tatas at the rate of Rs.3.5 lakh per acre. The market rate was said to be around Rs 5 lakh per acre.

The local state government also supplies infrastructure, grants permits, takes care environmental impact assessments do not complicate matters, accepts low royalties, does not ask for compensations for externalities or "natural capital depletion taxes". The urgency to sign mous seems inexplicable Orissa makes a small royalty compared to market prices for the ore extracted, so why is the state negotiating on behalf of companies instead of upholding the interests of citizens?


It is often remarked in Orissa that the chief minister does not speak the local language of the state, Oriya, much less the languages of the tribal peoples. Even so, there would remain vast differences in the languages employed by the companies, the state government, the intermediaries and the tribals themselves. "Sacredness", for instance, as in the Niyamgiri hills threatened by bauxite mining by Vedanta, is a language of the tribals, the anthropologists and some ngos, while cost-benefit analysis is a language of companies as well as the Supreme Court in India.

The government and development banks calculate costs and benefits of industrial projects purely in monetary terms, but the people displaced have lived off surrounding ecosystems for generations. Sharecroppers forced off the land may make Rs 60 a day as stone-crushers whereas before they made Rs 45.

A minister may calculate that they are therefore richer than before, gdp is rising and all is well. But this simple arithmetic disregards subsidies they had previously reaped clean drinking water, firewood for fuel, grass, nuts and fruits. They will no longer have access to these in the new modified landscape.

Economists estimate that products collected in rural areas in India outside the market, usually in common property lands, would reach 4 per cent or 5 cent of gdp if converted into money value. But they are not added; nor is the value of rivers and streams and biodiversity lost from mining projects considered in the cost-benefit analyses.

Some ngos opposing the projects, such as the Environmental Protection Group in the case of Niyamgiri, plan to undertake alternative cost-benefit analyses that account for environmental services provided by the forests and streams that will be lost, the lost biodiversity, the externalities of the red mud and fly ash ponds that will be generated, the loss of livelihood and the social costs of dispossession, and translate them into monetary terms--the only language they feel governments and corporations understand.

Are the languages of territorial rights, human rights, livelihood, sacredness, truly commensurable with money valuation (in terms of gdp)? They are not. There is really no common unit of measurement. The issue is who has the right, or rather the naked power, to impose the economic language of valuation, overriding all others. In that sense, economics, even when complaining that "externalities" are not included, becomes an accomplice to the task of depriving the poor of their own voices.

The situation also demonstrates how the knowledge and perspective of indigenous peoples is discounted. In the Supreme Court case on the Niyamgiri mine only two scientific committees will be allowed to present findings. But those who inhabit the region have their own understanding about the relationship between the bauxite mountains and the land. As anthropologist Felix Padel, currently writing a book on bauxite mining in Orissa, writes, "For adivasis, mountains are spiritual entities--in short, the continuity of everything they hold as sacred. Who is to say they are wrong about the forest on Niyamgiri creating a "magnetic force" that ensures the land's well-being for miles around?"

There is a large asymmetry in resources and power between those who oppose projects that threaten human livelihood, local cultures, and environment, and those who sacrifice such values in the altar of old fashioned industrialisation and economic growth based on mining.