An expensive project to grow imported olive trees is not yielding enough oil, and imposing other costs 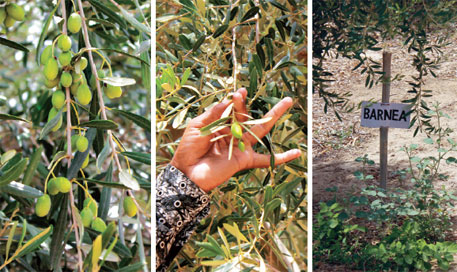 In May 2006, a delegation led by agriculture minister Sharad Pawar went to Israel to attend the 16th International Agriculture Exhibition. Rajasthan chief minister Vasundhara Raje was part of the delegation that went to visit world famous Kibbutz, a community cluster, in the Negev desert of southern Israel. She was, clearly, bowled over by the lush olive trees in the arid landscape.

Olive is a small tree of the oleaceae family and is native to the coastal areas of eastern Mediterranean (Italy and Spain), northern Iraq and northern Iran south of the Caspian Sea. Its fruit adorns salads, but is used primarily to extract olive oil, one of the most expensive cooking oils.

On her return, Raje decided to replicate the programme in her desert state and went about it with single-minded determination. She was undeterred by the fact that olive is alien to this country and is unlikely to show the results she had seen in the high-tech agriculture of Israel. She approached the Indian Council for Agricultural Research, but was rebuffed. Reason: a similar experiment was tried at Himachal Pradesh in 1985 and had failed miserably. But Raje persisted. Within six months of her visit to Isreal, a tripartite agreement was signed between Israeli company Indolive Limited, Rajasthan State Agricultural Marketing Board (RSAMB) and Pune-based Plastro Plasson Industries India, now known as Finolex Plasson Industries (India) Ltd, to set up a joint venture. The result was the Rajasthan Olive Cultivation Limited (ROCL), which was formed in April 2007.

As per the agreement, Indolive provided the expertise, Finolex the micro-irrigation solutions and equipment, and the Rajasthan government land and funds. RSAMB and Finolex invested Rs 1.50 crore each. About 112,000 olive plants of seven varieties were brought from Israel. Their rooted cuttings were hardened at a high-tech nursery set up especially for the project in Durgapura, near Jaipur. After the cuttings grew into small plants, they were transplanted in agriculture training centres (ATCs) at Sriganganagar, Nagaur, Bikaner, Jalore, Jhunjhunu, Alwar and Jaipur districts.

The trees started bearing flowers and fruits in 2012, a year or two after they should have done so. Of the seven varieties planted on 182 hectare (ha), only three have yielded fruits, that too very little. The total production was only 10 tonnes and the oil yield was a mere 9-14 per cent of the olive production. This is what three-year-old trees yield the world over.

Yogesh Verma, manager of ROCL, claims the experiment is a success. “Lab tests show that oil content in our olives is between 10 and 14 per cent, which is good. Our focus now is on improving the yield and bringing it to international standards,” he says.

The state government’s ultimate aim is to get farmers buy these plants for their own plantations and earn profits. To achieve this, it has established a world-class nursery at Bassi, in Jaipur, which can produce one million plants in a year. It is also setting up an olive extraction plant at the cost of Rs 5 crore at Lunkaransar in Bikaner.

The state government has diverted 182 ha, earlier used by ATCs for research and seed production, for a horticulture crop which is still a pie in the sky. The Lunkaransar ATC, for instance, has 75 ha. Of this, 30 ha has been diverted for olive. ACT officials say seed production earlier fetched around Rs 25,000 per hectare, amounting to Rs 7-8 lakh per season for 30 ha. “Revenue has dried up completely,” says a scientist working in an ATC who did not wish to be named.

A senior scientist told Down To Earth that most ATCs had resisted the experiment but gave in because it was a government decision. “Olive is a horticulture crop with a long gestation period. Diverting such a huge chunk of land to an unknown crop is risky,” he says. The vegetative growth in these orchards has reached 80 per cent, but reproductive growth is still zero, he adds.

Olive’s success will be at the cost of local flora, including khejari (Prosopis cineraria), a keystone species in the state, says Deb. Dense olive monoculture can alter the local ecosystem and habitat through loss of native biodiversity. Native seeds present in the soil will eventually get depleted and limit the ability of native plant communities to regenerate even if olive is removed later.

Deb warns that olive also has its own portmanteau of exotic pests and pathogens. The state’s agriculture machinery does not even know right now how they can affect agriculture. A bacterial disease called olive knot, caused by Pseudomonas savastanoi, has spread in Australia from imported seeds and seedlings. Australia’s national science agency Commonwealth Scientific and Industrial Research Organisation acknowledges, “There is no cost-effective way to control knots in olive groves by using currently available bactericidal sprays.”

Cercosporiosis is a common and widely distributed disease in most olive growing countries—Algeria, Argentina, Australia, Brazil, Chile, China, Germany, Greece, India, Italy, Montenegro, Netherlands, New Zealand, Portugal, Spain, Tanzania, Tunisia, the US and the former Yugoslavia. However, this disease was first reported in UK in 2009.

“Rajasthan may experience a new disease agent whose impact on local biodiversity and agriculture cannot be foretold,” says a senior entomologists in the state agriculture department on the condition of anonymity. “If any new pest or pathogen erupts and attacks any other native plant species, the impact will not be confined to Rajasthan because insects and fungi can spread across long distances in very short time. There are numerous instances of exotic crop pests or pathogens spelling disaster for a country’s agriculture and forest ecosystems,” says Deb.

When the project was started in Rajasthan, agricultural scientists from the state government or the state agriculture university were not involved, says the entomologist. “Israeli experts were blindly followed without thinking of its implications on local agriculture and biodiversity,” he says.

But Verma of ROCL dispels all fears of invasion by the foreign olive species. “The plants were imported through the Department of Plant Protection, Quarantine and Storage. They were free of all pests and diseases,” he says.

Notably, olive trees require a considerable supply of water to produce good quantity of fruits. This implies that irrigation for the orchards will tax heavily the local stock of water, whether tapped from rivers and ponds, or from the subsurface water table. In its obsession for olive, the state government has overlooked the ecological disaster for the local population in the near future.

Despite the threats, the state government has decided to expand the project. In the next three years, it aims to spread olive to farmers’ fields over 5,000 ha. Farmers get 75 per cent subsidy on plants, 90 per cent subsidy on drip irrigation and Rs 3,000 per ha for fertilisers and chemicals. Besides, they get technical support of one expert per 50 ha. At present, Rajasthan farmers get one olive plant for Rs 115, while farmers from other states buy it at the cost of Rs 150. 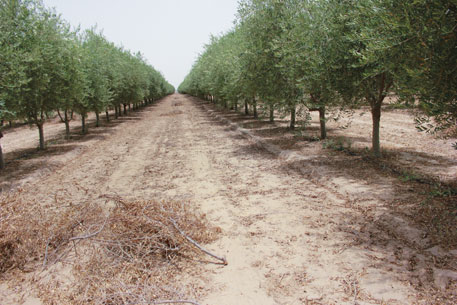 Peleg admits that farmers in Rajasthan are different from their Israeli counterparts who use advanced technology and are prosperous. The economic returns of olive come after a few years of plantation, “so either the government should provide farmers with monetary help or farmers should find a way to sustain themselves for this initial orchard investment period,” he says.

While the state government is confident that farmers will get a good price, the question is how sustainable olives are in Rajasthan’s climate and agrarian economy.