At home in a cave

At home in a cave 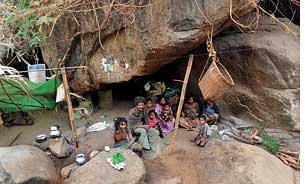 A 100-kilometre bus ride from Kozhikode had brought Ajeeb and me to Nilambur, a small town in Kerala's Malappuram district on the Kozhikode-Ooty Road. Krishnan, an officer with the tribal department, joined us and we hired a jeep to the Karulai Reserve Forest. We were on our way to meet the Cholanaickans--the only tribe in Asia that lives in caves.

Karulai rainforest is part of the Nilgiris Biosphere Reserve on the Western Ghats, a treasure trove of biodiversity. There were 11 alai (cave settlements) scattered in the dense forest, we were told. The bumpy mud road of about 20 km through the teak plantations in the forest ended at Manjeeri. Here Moinkutty joined us.He has been running a forest produce collection centre under the Nilambur Scheduled Tribe Development Cooperative Society for more than 25 years. Moinkutty knew forest tracts, the tribe and their language.

We started trekking. The nearest alai was six kilometres away at Karimpzha. Even at 11 am, sunlight barely penetrated the canopy of the moist, deciduous, evergreen forest. We made our way past thick creepers, bamboo thickets, bright flowers and orchids, spotting birds we had never seen. Far below was a silvery rivulet, a rare visual feast. Ajeeb could not stop clicking. 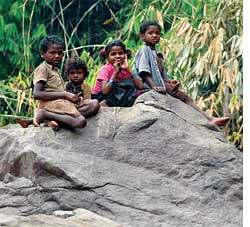 He was stopped by Moinkutty. "Please be quiet," he cautioned in a hushed voice pointing to the fresh elephant droppings along the tract. "The herd could be in the vicinity, and might get agitated by loud voices and strange smells." Moinkutty preferred a "short cut". We started climbing down a mountain slope, crunching the leaves on the way. Holding on to the creepers, exposed roots and bamboo we trudged down slowly. An uncertain step would have us hurtling down. And there they were, atop a rock, casting bewildered looks at us the Cholanaickans.

We were near a natural cave settlement. There were only two families there Karimbuzha Mathan and his wife Karikka and Karimbuzha Ravi, his wife, mother and four children. Squatting around the hearth, Ravi's wife was cooking and breast-feeding her baby. Karikka was weaving a basket.