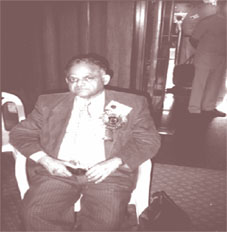 Malaria affects the most vulnerable: children of poor families in developing countries face the greatest risk. The chemical pesticides used to combat the disease in the past 50 years or so pose grave dangers to the environment and human health (see box: Problem ). Any solution that can help the most vulnerable people to get out of this treadmill, in which the cure becomes worse than the disease, is of no mean value. That is what bioenvironmental vector control does -- controlling malaria without damaging the environment. And that is why V P Sharma's work is important (see box: Solution ). He has made an alternate strategy of malaria control operationally feasible.

Sharma's work ranges from malariology, epidemiology and malaria control, entomology, genetics, vector biology and control of vector-borne diseases. It isn't that he invented techniques for bioenvironmental vector control -- they were there before he began his work. His major contribution has been to integrate these approaches. In this, Sharma's work establishes the view that the age of sectoral approaches to problems is over. The key word for the 21st century is 'integration'. The realisation of non-chemical approaches to malaria control is a direct impact of Sharma's work (see table: What it is about ).

His work as the founder-director of the Malaria Research Centre ( mrc ) helped take the message of bioenvironmental control across the country. After projects were carried out to validate the bioenvironmental system, several state governments have taken it up, including those of Maharashtra and Goa. Go through scientific papers on malaria in India and you are bound to come across references to Sharma's work. The secondary impacts of mrc 's work include the creation of minor industries like fisheries, culture of biological control agents and treated bednets. Among the awards he has received are the Padma Shree, bestowed by the government of India, and the Darling Foundation Award given by who , which has accepted Sharma's approach as a way to control malaria.

Sharma's work doesn't stop at addressing a grave threat to public health. It goes a step further in coming up with a sustainable development strategy for rural India, a system that can decentralise healthcare and base it on more common sense approaches. Sharma's work is important also because it negates the adverse effects of bad planning by Indian administrators. Kheda district in Gujarat, where the bioenvironmental approach was initiated, is a potential site for malaria epidemics because of several ecological changes. With the onset of canal irrigation, several factors such as continuous irrigation, multiple cropping patterns, increased waterlogging due to seepage from canals, and the lack of proper and adequate drainage have resulted in an alarming rise in the incidence of malaria. This is pretty much the story across the country, from areas in Rajasthan that have been introduced to the disease after the coming of the Indira Gandhi canal, to the villages of Bihar were embankments built on rivers have created waterlogging.