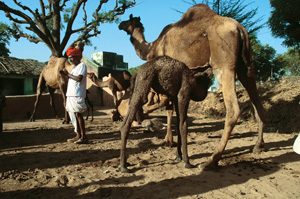 This monsoon, the Raikas, traditional camel breeders in the Kumbalgarh Wild Life Sanctuary in Rajasthan's Pali district, will face an existential crisis again. It will be the third successive season that the pastoral community will have been banned from grazing their camels in Kumbalgarh. Living in the Bali and Desuri tehsils of Pali district, Raikas who also breed sheeps and other cattle have relied on the sanctuary for fodder and livestock for generations. With the ban in, these one-time camel breeders of the maharajas of Rajasthan, Raikas' are facing disappearance now.

In September 2004, following an order issued by the Central Empowered Committee (cec) appointed by the Supreme Court, Rajasthan's forest department banned Raikas from using the forest for grazing camels. Officials believed grazing by the Raikas, who use the forest only during monsoon, could harm the biodiversity of the sanctuary.
The move which threatened the community's existence was, however, uncalled for, feel experts. Camel grazing in Kumbalgarh sanctuary can hardly cause harm to the forest, says Anil K Chhangani of the School for Desert Sciences in Jodhpur. "Camels are primarily browsers and not grazers. They play an important role in the regeneration of a number of trees. Further, they are soft-hooved and gentle to the soil surface," says Chhangani countering the official version. T K Gahlot of the College of Veterinary Animal Sciences, Bikaner, agrees "Being browsers, camels do not compete with other herbivores for food. They do not ravage a full shrub like goats do. Instead they move from one tree to another taking not more than three to four bites."

The root of the Raikas' current crisis can be traced back to April 14, 2000, when the Supreme Court (sc) imposed a blanket ban on the removal of any produce from protected areas, including deadwood. sc reinterpreted the rules on utilisation of forest resources in all national parks and sanctuaries. The apex court banned "the removal of dead, diseased, dying or wind-fallen trees, driftwood and grasses, etc, from any national park or game sanctuary". The court also noted that "in view of this, rights and concessions cannot be enjoyed in the Protected Areas". Though the court did not specifically mention grazing, cec, which asked states on July 2, 2004 to enforce the sc ban, billed grazing a prohibited activity.
Just after receiving the cec directive, Rajasthan's forest department banned the Raikas from Kumbalgarh. The ban was a blow to the Raikas who were right-holders to the Kumbalgarh sanctuary. They challenged the cec decision in the apex court in February 2006. They had been using the sanctuary from June to September each year when pasture outside the sanctuary is cultivated.

The 2004 order didn't exactly come as a bolt from the blue. The state government had banned grazing in Kumbalgarh in 1999, too, a year before the sc ruling, following a forest protection committee intervention. The Raikas challenged the order in the Rajasthan High Court, which restored their grazing rights in March 2003. Rajasthan had been issuing grazing permits since 1956 in the forests of the Aravalli hills, on payment of a fee.
According to Heera Ram Raika of the Raika Sangharsh Samiti (rss), an organisation formed to combat the cec prohibition, the 2004 ban was imposed ignoring ground realities.

"Our relationship with the forest has been one of friendship and respect, where the community does not over-utilise forest resources and helps conserve it by checking forest fires," he says. Filing the petition in sc, rss said cec's July 2004 directive could not override the high court order which permitted Raikas to graze their animals in the sanctuary. The body claimed it still held the right to use the forest under concession and also sought an interim order legitimising their stand, which it felt would help the community avoid selling off its cattle. The battle is still on.

The Rajasthan forest department's estimates show Kumbalgarh sanctuary has a carrying capacity of 13,415 cattle units. (A cow is equal to one cattle unit; a buffalo two units; sheep 0.25 units each; and a camel is four units). In its reply to the rss petition, the forest department informed the court that 16,821 cattle units were allowed to graze till the cec ban was imposed in 2004. In the affidavit, it said grazing would lead to "detrimental effects" by "reducing availability of forage for wild animals"and would "spread of dispersal weeds and invasive species".

cec supported the state government's decision. "The Rajasthan forest department has taken an unequivocal stand that grazing particularly by camels should not be allowed within the Kumbalgarh sanctuary as it affects the grass availability for herbivores and regeneration of the area," it said.


The Raikas' case is still with the Supreme Court, which will have to sift conflicting evidence. A study by Paul Robbins of the University of Arizona, usa, with Chhangani shows human-induced activity, including grazing, helps floral diversity flourish in Kumbalgarh. This is in conflict with the arguments of the forest officials.

Preliminary findings of the study, 'Protecting Wolves from Sheep? People and Wildlife in the Rajasthani Aravalli', were presented at the Fifth International Conference on Rajasthan in December 2005. "The problem at Kumbalgarh is that a co-evolved ecological system like this cannot be suddenly turned into a wilderness, either in practical terms or ecological ones," notes the study. Put simply, keeping the Raikas away from the forest can also cause it problems.

The three-year study used satellite images of the sanctuary between 1986-1999 to establish that human interference in the forest led to greater diversity in the floral coverage. "Satellite imagery of a period of high and sustained human access to the reserve shows a great deal of dynamism in forest cover, especially in areas close to adjacent user communities," notes the study.

It refuses to link grazing to the decline in the population of other animals like the four-horned antelope and chinkara. "The sc order should have been area-specific, not uniform for all national parks and wildlife sanctuaries, for each ecosystem is unique in its biodiversity. This depends on different biotic and abiotic factors, which also includes grazing," says Chhangani. The researchers also found there had been a 51 per cent increase in the number of leopards and panthers (see table Animal increase). The Raikas' sheep fed the big cats, contributing to their survival. This means shooing away Raikas from Kumbalgarh can have an adverse impact on these animals.

The ban has other immediate fallouts. Loss of grazing grounds has already affected camels in the region.

In 2004 'Camel in Rajasthan (Agricultural biodiversity under threat)', a study by the Lokhit Pashu Palak Sansthan (lpps), an organisation working among camel breeders in Pali, noted that in Desuri and Bali tehsils the camel population fell by 47.37 per cent between 1995 and 2004 Even the rest of the state witnessed a drop in the camel population by almost 35 per cent in 11 years. From 756,088 camels in 1992 the population fell to 498,000, owing to several reasons, including the illegal trade in camel meat (see box 'Vanishing camels').

Arzi Ram, a Raika from Mundara village in Pali, owned 75 camels. Now his herd has less than 30. "Pasture lands decrease every year and it has become tough to keep a large herd," he says. Ram was forced to sell female camels recently, breaking with religious taboo.

According to Ilse Khler-Rollefson of lpps, members of the Raika community are being forced to migrate for work. "Recently there has been a steady outflow of Raika youth to metros since animal rearing no longer seems to be a decent option for them. If this is not stemmed, the Raika as a unique community will disappear soon," she says.


Purnendu Kavoori, of the Institute of Developmental Studies, Jaipur, says the conflicts surrounding pastoralists, such as the Raikas, are examples of processes by which contending resource users end up blaming each other for their problems. Raikas, he says, are not an effective pressure group. "So they have no choice but to follow the whims and fancies of decision-makers," Kavoori says.

With another monsoon just a few months away, the Raika families are now pinning their hopes on the legal battle for survival. But the point is whether the lumbering judicial process will produce a verdict soon.