How Vedanta's refinery came up

How did Vedanta complete its refinery on schedule amid this fuss? With a little bit of help from the Orissa government and MoEF, it seems. Despite being aware since October 2004 of the company's violations of forest laws, it was only on March 23, 2005, after CEC questioned MoEF about the validity of an environmental clearance, that the ministry directed VAL to halt construction work till clearance was given for the 58.9 ha of forestland within the refinery compound.

The next day the company dashed off a letter to MoEF seeking withdrawal of its request for forest clearance for the refinery saying it didn't need the 58.9 ha after all. The state government sent MoEF a letter recommending withdrawal of the proposal on March 27, 2005, which happened to be a Sunday. The very next day, the ministry withdrew its stop work order, without bothering to look into why the company had changed its stance. Or, as the CEC report later said, "without examining its effect, propriety, linkage with environmental clearance".

Vedanta's legal gymnastics on the matter have been remarkable. At CEC hearings, it first said mining on Niyamgiri was absolutely necessary for its project, then when questioned by CEC about starting work on the refinery without having mining clearance, it came out with the statement that the mines and refinery were separate projects and if the mines weren't approved it would ship in the bauxite from elsewhere. In response, CEC observed that if the mine wasn't absolutely necessary, approval could not be granted under FCA.

Vedanta immediately performed a perfect back flip. It now insisted the Lanjigarh refinery could not function without the Niyamgiri mines.

"The expenditure by the company on the refinery reveals the certainty of their expectation to get the clearance under the Forest Conservation Act since they would be presenting a fait accompli situation before the concerned authorities. Such cavalier attitude towards the laws of the land needs to be discouraged," CEC noted in its report.

Though the project is hanging fire in the Supreme Court, at Vedanta the mood is upbeat. "We have presented plans to address the impact on wildlife, forest and water bodies. It's all already there in the EIA, WII and CMPDIL reports. In any case, Orissa has the largest bauxite deposits in India. If not Niyamgiri we can get it from somewhere else in the state," Mehta told DTE.

The company's Jharsuguda smelter project, which received formal approval as a special economic zone on June 4, 2007, also allegedly started construction work without obtaining mandatory environmental clearances. A petition against it by Samantara is pending with the National Environment Appellate Authority.

Repeated attempts by DTE to get comments from Agarwal and senior executives of Vedanta elicited no response. 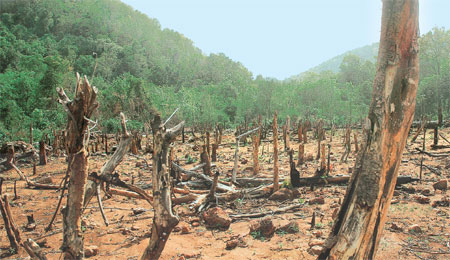