City administration makes fresh promises to get an extension to dump its waste at Mandur village. But will the five-month breather be enough for Bengaluru to overcome its garbage segregation problems? 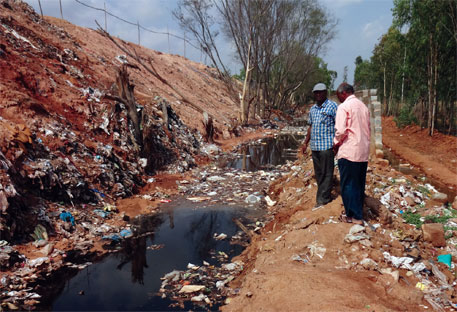 ON JUNE 3, 2014, more than 700 policemen marched into Mandur village near Bengaluru—to forcefully dump the city’s garbage in the protesting village. The district administration slapped section 144 of the Criminal Procedure Code that prohibits an assembly of more than 10 people in an area and arrested over 100 people.

Fourteen days later, the administration managed to get a five-month extension to dump garbage. It agreed, in return, to fulfilling the promise it made to Mandur residents in the past eight years of segregating and processing the waste before dumping.

But this is not the first time that the district administration has forcefully taken an extension from Mandur residents. Nor is Mandur the first village to protest Bengaluru’s garbage dumping. In 2012, residents of Mavallipura village staged a protest. The landfill was later closed down by court orders. After the Mavallipura crisis, segregation of wet and dry waste at source was made mandatory in Bengaluru by a court order.

However, garbage segregation and processing has hardly improved since the 2012 court order, thanks to bureaucratic apathy and corruption. Against this background, the five-month breather is unlikely to help Bengaluru overcome these hurdles.

Feeding lies
A strong, sour stench is present at all times in Mandur village, which is flanked by huge hillocks of garbage. In 2006, Bruhat Bengaluru Mahanagara Palike (BBMP) had decided to set up a landfill in the village to dump waste from the city. Eight years later, it has failed to deliver on its promise of processing and recycling dumped waste. 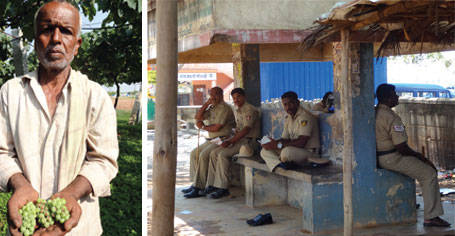 “Srinivas Gayathri has not worked at all, while OWI works on a token basis when officials visit the landfill,” says resident Sreedhar Gowda. A third company, Ecofab, has been given a Rs.2 lakh-per-day contract for spraying organic liquid on the garbage to diffuse the odour and kill insects, but Gowda says spraying is done only once or twice a month. “The entire money is being pocketed by the company and BBMP officials,” he adds.

Officially, 1,800 tonnes of garbage should be dumped daily in Mandur, but residents say the actual amount is higher—400-450 loaded trucks visit the dump yard every day. On an average, five tonnes of waste is transported in one truck, which adds up to 2,000-2,250 tonnes of garbage—or half of Bengaluru’s daily waste. Also, the small portion of garbage that is segregated at source in Bengaluru gets mixed up during transportation to the landfill.

Over 4 million tonnes of garbage already lies at the landfill. Poisonous leachate has not only contaminated the groundwater, but also destroyed mango and grape orchards in the area. Virtually every family has members suffering from malaria, recurrent fevers, gastric and skin problems—despite buying packaged drinking water for Rs.30 a can. Amit Bharadwaj, a doctor in the village, says, “There were hardly any cases of malaria in the area before the landfill was set up. But in the past few years, the number of cases has gone up.”

Fresh promises
BBMP on June 17 committed, in writing, to end garbage dumping at Mandur landfills within five months. A day later, Karnataka High Court ordered BBMP to clean up the 4 million tonnes of waste lying at the dump in the next two years, and to finalise the contracts for the clean-up in a week.

K C Yathish Kumar, joint commissioner for solid waste management and health, says the administration is planning to cancel Srinivas Gayathri’s contract. He, however, has no explanation for why it took the administration six long years to take the step. Srinivas Gayathri has so far appropriated huge of money amounts for garbage handling and has raised a loan of Rs.90 crore by mortgaging the land allotted to it.

The old contractor mafia is still running the show and, most importantly, a dedicated solid-waste management cell, recommended by BBMP’s own Solid Waste Management Expert Committee (SWMEC) a year ago, has not been set up.

Desperate measures
BBMP’s frantic search for new landfills in the past has drawn a blank. Towns around Bengaluru such as Doddaballapur, Ramanagaram, Tumkur and Chikkaballapur are either already receiving garbage from Bengaluru or are fighting their own garbage war. Tumkur recently saw a garbage crisis after the village of Ajjagondanahalli rose in protest against dumping. Doddaballapur town is up in arms against around 400 tonnes of Bengaluru’s garbage being dumped daily at a landfill run by a private firm. Togarighatta and Kodikerenahalli villages have said a no to receiving garbage.

N S Ramakanth, a member of SWMEC, says new garbage treatment plants cannot be set up and made functional in five months. “Even sites have not been identified,” he says.

So a desperate BBMP is working out options of giving wet waste to farmers. Ramakanth says farmers are being identified in every ward to take the wet waste for composting, cattle-sheds and piggeries to reduce the volume of waste going to Mandur.

He says SWMEC has recommended a checkpoint at Mandur where the number of trucks arriving from each ward can be recorded. “Each ward should be made responsible for bringing down waste over time by implementing scientific disposal measures. Actually, areas like Yelahanka in Bangalore which has one functional and one upcoming biomethanisation plant and lots of farms in the vicinity, should not be allowed to dump at all,” he says.