The National Census kicked off on April 1, with a difference.

This time the census has gone beyond gathering demographic and economic information; it is collecting data on ownership of mobile phones, computers, internet connection, TV sets, cars and radios. The census team will then go a step further and nail each person’s identity by taking his/her photograph, fingerprints and iris scan. The last inputs are for the Centre’s project to build a biometric identification system and issue everyone residing in India a Unique Identification (UID) number.

Use of the census process to implement the UID project has, however, raised hackles of a section of researchers, academics and human rights activists. On April 16, NGOs following the project, launched in August last year, met in Bengaluru and demanded immediate scrapping of UID, for they see it as a threat to privacy and security. They launched a group named Citizens Against UID. UID is an ambitious scheme to captu re biometric data of hundreds of millions of people—everyone aged 15 ye ars and above—and store it in an online databa se. No other country has attempted such a project on this scale. The nu mber would be used for all official transactions, ban king tra nsa cti ons and sche mes such as the public distribution system (PDS) and the National Ru ral Emp loyment Guarantee Scheme (NREGS).

“We have serious objections to the way the census process is being used to pitch the UID project, and no discussion on this has happened in any of the dem ocratic forums, including Parliament,” said a statement issued by Citizens Against UID and endorsed by 61 statelevel NGOs and several individuals. The group threatened to boycott the census if UID continues to be tagged with it.

Data generated through census is the most credible source of information to frame or review policies and social welfare sche mes. This year additional information on ownership of computers, cars, etc will be compiled as the National Popu lation Register (NPR). “The forms have over 50 questions per person,” said Aradhana Panicker, a mu nicipal school teacher in Delhi who has been roped in for the census exercise.

The aim is to have a comprehensive identity database that would make government schemes more targeted, improve planning and help strengthen the security of the country, according to the Office of the Registrar General and Census Commissioner, under the Union Ministry of Home Affairs.

But both the NPR and the census are being conducted under two different sets of rules. The census is done under the Census Act 1948, which punishes breach of confidentiality. The NPR is being prepared under the Citizenship Rules 2003, which does not have any provision on confidentiality and will specifically feed the UID process, said Usha Ramanathan, the programme director of the non-profit International Enviro nmental Law Research Centre in Delhi.

Safeguards to prevent registrars, responsible for collecting the census and NPR data, from sharing and using the information for any other purpose are not clear, pointed out Vinay Baindur, an independent researcher in Bengaluru.

The NPR data would be shared with the Unique Identification Authority of Ind ia (UIDAI) under the Planning Commis sion. But the legal status of the authority and the UID project is disputed. The Centre launched the project by an executive order and set up UIDAI without the backing of legislation. Nothing is known about how its chairperson Nandan Nilekani was selected, said Baindur. Despite repeated efforts, Nilekani could not be contacted for comments.

Taking note of the growing dissent, the government has now proposed framing a law to give legal backing to the project and the authority, but it has not specified a timeframe.

Once the project is ready, complete information about each citizen would be available on one computer as online database. Punch a UID number, and one can have details, including fingerprints and iris scan, of the person. The UID number can be used to trace the past and current movements of a person.

“Where I live, when I move, how well I do at work, whether I was ever a slow learner, are expected to get transformed as memory with experience and relevance,” said Ramanathan. “The UID and its information will never be deleted, only disabled, and used for centuries.” The online database will not be hack-proof. Nilekani admitted this in a television interview when he said, “There are challenges of privacy and I think, along with this project, we have to put in other checks and balances, including laws.”

A section of lawyers has termed UID anti-Constitution and an infringement of civil liberties. Perry4Law, a Delhibased techno-legal firm with expertise on cyber laws, alleged the government frequently violates human rights in cy berspace. “The right to privacy and data protection and the right against e-surv eillance by the state are in jeopardy due to growing and unaccounted government intrusions and violations,” it said. The registrars are also being asked to mark out people who they suspect may not be citizens, and class them for further inquiry, Ramanathan said.

Technology has its limitations

Very little is known about the technology UIDAI will use for the UID system. Officials are not ready to comment on this “sensitive” issue. Sources at UIDAI said the authority would decide on technology once the pilot project in Pat na, Bengaluru, Pune and Hyderabad concludes. “Private agencies have been en g aged there to conduct the biometric survey based on standards specified by the government,” said a senior official who did not want to be named. Accord ing to him, the technology is available in India. 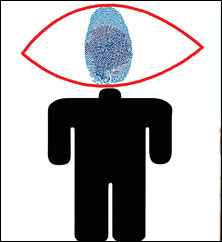 Experts are sceptical whether the te chnology can be scaled up for over a billion Indians and numerous social welfa re schemes. “Can the technological infr astructure carry the burden of such ma ssive data storage, networking, live sharing and verification? If so, what are the associated costs of the project? What are the probabilities of system failures and errors? What are the social costs of these errors?” asked R Ramakumar, economist and assistant professor at the Tata Institute of Social Sciences in Mumbai.

A small percentage of users would always be either falsely matched or not matched at all against the database. Glo bally, 2 to 5 per cent of the population have fingerprints permanently damaged to an extent they cannot be recorded. In India, the share of such cases could be 15 per cent, which means a minimum of 150 million persons would get excluded from welfare schemes due to the UID project, said Ramakumar.

Cost is another unknown aspect of the UID project. For the current financial year Rs 1,900 crore has been allocated, but even the government has no clue what it will cost to implement the sche me nationwide. Unconfirmed reports claim the cost could go up to Rs 1.5 lakh crore. Leaked information from the Pla nning Commission put it at Rs 20,000 crore. The government is tightlipped. In the television interview Nilekani said, “We don’t know what the cost will be, but I am confident whatever the cost is, the social, economic and efficiency benefits of it would make it well worth it.”

The benefits themselves are not clear. “Claims have been made of big sa vings from the UID stemming leakages in welfare schemes such as NREGS, PDS and the LPG subsidy. But where are the feasibility studies?” asked Ramakumar. “In efficiency in welfare schemes isn’t be cause of the absence of identity proofs.” Ramakumar pointed out that very few countries have provided national ID cards or numbers to their citizens. ID cards or numbers can be used to profile citizens and initiate racial or ethnic cleansing as during the genocide of the Tutsis in Rwanda in 1995.

Perry4Law has demanded that UIDAI does not use public funds till provisions for it are incorporated in the law. On June 1, Citizens forum for Civil Liber ties, a group of media practitioners, researchers and activists, issued an open letter denouncing the UID project. Citizens Against UID wants transactions undertaken by the project scrutinized by an accountable public body.

With inputs from Jyotika Sood in Delhi

How data is collected and processed

The census team visits each household and gathers information by as king questions and filling up forms. This information is kept confidential. After the field work is over, the forms are taken to data processing centres in 15 cities. A sophisticated software called Intelligent Chara cter Recognition Software scans the forms at high speed and extracts the data, which is then stored in computers.

In the next stage, persons aged 15 and more will have to give their biometric data, such as photogra phs, 10 fingerprints and iris scan. The data will be printed out and displayed at prominent places in villages and wards for the public to see. Objections will be dispo sed of. Lists will then be placed in the gram sabhas and the ward committees.

The authenticated list will then be sent to the Unique Identification Authority of India for issuance of UID numbers. The database, along with the UID number, will then be sent back to the Office of the Regis trar Gene ral and Census Commissio ner and will form the National Population Register. Everyone above 15 years will have a biometric-based UID number. For those 15 years old and younger, the UID number will be linked to the parent or guardian.