Odisha village gets pattas after nearly half a century. Land reform programmes get jumpstart 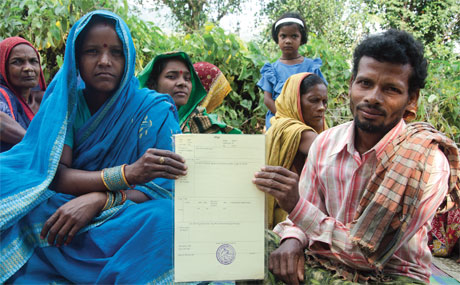 They say home is where the heart is, but that’s not always true. Ask Arakhita Pradhan, resident of Chilipoi village in Odisha’s Ganjam district. On a cold evening some 44 years ago, the authorities forcefully shifted him and his neighbours to a place where no civic amenities existed. Reason: the state had built an irrigation dam that had submerged their village in Khurda district.

The 19 displaced families built Chilipoi out of nothing over the next four decades—but remained homeless. For, the people were not officially given titles (pattas) to the land they were using. “Chilipoi remained illegal as it never appeared in the state’s map. Even though we set up this village with our hearts, we could not call it home,” says Arakhita.

Destiny favoured them in November 2010. Chilipoi became legally recognised after the families were given pattas for both homestead and cultivated land. “Within a year life has changed. I feel I have ownership over my life, family and land,” says resident Budhi Pradhan. Other residents say: “Jeevana pheri asi chi (life has come back to the village).”

The change in Chilipoi’s life is not abrupt; it is a culmination of a well thought-out programme. Rural Development Institute (RDI), an NGO working on land rights across the globe, started the programme in 2008. In 2005-06, Odisha refocused on its land reform and surplus land distribution laws, promulgated in early 1950s, to address the problem of landlessness. Santosh Sarangi, secretary of the state’s Scheduled Tribes and Castes Development department, says, “Despite the laws, we were not able to fight widespread landlessness. It is a major cause of poverty.” It launched the Vasundhara scheme, which entitles homestead plots of up to 0.04 hectare. Within three years, the report card on the scheme showed allocation of 90 per cent of available land, reaching out to 223,000 households. RDI wanted to check the claim.

In 2009 it surveyed 88 villages across 10 districts to find the impacts. The results were startling. Of the 2,763 households eligible for the scheme, only 1,619 made it to the list. Seventy five per cent of those who did were not in possession of their land. Fresh sites were not identified or demarcated, and homesteads were allocated away from homes. Government responded to the ineffectiveness with another campaign which, too, did not work. “Staff shortage at the field level was identified as the most important reason for tardy implementation and limited impact of the scheme,” says RDI’s state director Sanjoy Patnaik. The revenue inspector, who is also the nodal official to process pattas, looks after 40-50 villages, and identifying and demarcating each piece of available land is a lengthy process.

To build capacity of the revenue officials, RDI joined hands with the state. It introduced the concept of community resource person (CRP), a literate resident who knows the village and its people well. Trained by the revenue officials, a CRP processes patta applications, helps the officials identify government land available for distribution and coordinates between the government and the village on the status of the applications. A CRP is selected in a village meeting and must be approved by the revenue officials. The government agreed to implement this concept as a pilot in 36 villages in three districts, including Chilipoi. To begin with, a CRP was paid a modest honorarium of Rs 2,000 per month. 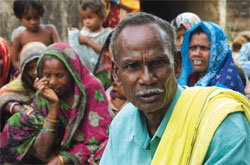 In four months, 27 CRPs identified 1,270 households eligible for homestead pattas. The cost per allocation was Rs 127, while the time taken was two days. The revenue department sets up camp courts in villages where pattas are given immediately based on the backend work done by the CRP. “It busted a myth. Land reform and settlement can be done without the perceived expertise of the revenue officials,” says Patnaik. In all the villages, Vasundhara scheme reached its peak. “A 50-year-old problem has been solved in five months,” says Debendra China, a CRP.

But Ganjam district, particularly the Khallikote tehsil, had a distinct problem. It reports large-scale migration of male members. This leaves the women members behind who do not have much knowledge on how to access pattas. In fact most of them are not aware of women’s right to land. This had a negative impact on the scheme. To tackle this, RDI set up the state’s first Women Land Rights Facilitation Centre in Khallikote. The centre provides information on women’s rights to land under state programmes. Now all pattas given under the scheme are in the name of both male and female heads of a family.

The experience of these villages post pattas underscores the economic importance of land reforms. Most of the families covered under the programmes are marginal farmers. In Chilipoi, no family was taking up agriculture as a full time occupation despite availability of land. But with their rights settled, people are again involved in vegetable farming. On an average, each family earns Rs 1,000 from farming after meeting their own needs. “My family earned Rs 2,500 from potato farming last year. This extra earning will fund my children’s education,” says Bhanu Pradhan, president of the village’s self-help group set up to start community saving. What’s more, pattas give residents a legal existence; they can apply for government programmes like housing support. Children earlier denied admission to free boarding schools for tribals are now being admitted on the basis of pattas. They also help in getting caste certificate.

Chilipoi has set the trend for the state’s land reforms programme. In December last year, the Odisha Tribal Empowerment and Livelihood Programme adopted the RDI initiative in 1,042 tribal villages across seven districts to cover 56,000 landless and homeless families by 2012. There are 542 CRPs working with revenue officials to speed up land distribution. “The initiative has gone beyond land rights,” says Sarangi. The idea is to make small land not only viable but also profitable. Encouraged by its success, the revenue department has proposed to extend the initiative to all tribal development blocks of the state.