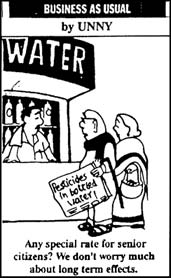 The Indian government has notified new standards for pesticide residues in bottled water. The notification came on July 18, 2003, bringing the curtains down on a 6-month drama that had turned quite farcical.

6 months ago, a study conducted by the New Delhi-based Centre for Science and Environment (CSE) (see: 'Pesticide residues in bottled water', February 15, 2003) showed that most brands of bottled water being sold under the ISI quality certification mark were pesticide-laden. Indian regulatory law for pesticide residues -- the Prevention of Food Adulteration Act, 1954 (PFA) and standards specified by the Bureau of Indian Standards (BIS)-- was exposed as archaic.

Government was embarrassed. BIS formed an expert group to look into the matter. It proposed new standards for bottled water, which recommended quantified maximum residue limit for individual and total pesticides.

It also recommended that a total of 32 pesticides should be screened and analysed by an accredited laboratory, using internationally established test methods.

On another front, a four-member committee -- under Satwant Reddy, additional secretary in the Union ministry of consumer affairs, food and public distribution -- set up to study the proposed notification submitted its report on March 25. The committee supported the proposed notification but said that when " BIS establishes a standard it must specify the corresponding test methods" The proposed amended notification, which said that the analysis should be conducted using internationally established test methods, was "vague" and " BIS should set up another committee to specify testing methods." The report was submitted to Sharad Yadav. He asked BIS to set up a committee to look into testing methodologies. That seemed to be the end of the matter.

While all this was going on, Union minister for health and family welfare Sushma Swaraj grandiosely declared that by April 1, 2003, the new standards would be adopted via an amendment in the PFA Rules, 1955. But the April 1 deadline came and went. The new standards couldn't be adopted because public comments on the draft rules were being studied. On April 7, the matter was placed before the Central Committee for Food Standards (CCFS), the highest body in the country that sets mandatory minimum safety standards for food items. It unanimously agreed that new standards should be adopted. The decision was communicated to Swaraj. And that, too, seemed to be the end of the matter.

Then in July, BIS and the ministry of health held parleys with scientists and industry. The BIS meeting cleared the notification with an amendment specifying the choice of testing methodologies, but even at this late stage, industry opinion was that the proposed notification needed dilution before enactment.

Now the notification is official. It will come into force from January 1, 2004.


Arguably, the Indian government's ways of setting standards for food and similar consumables -- drinking water, carbonated water -- are standard-setting in themselves. No one the world over can follow it;

All the ministries have their own system for setting standards in the country. Ineptitude and lack of scientific rigour mark the standard setting exercise in the country.

• At present, the Indian food industry is governed by 14 separate pieces of legislations, which specify different standards.

• The most important compulsory legislation is the PFA. Under it, the manufacture, sale, storage or distribution of products not conforming to the standards laid down under the laws is a contravention leading to fines and imprisonment. The CCFS and its various subcommittees under the Directorate General of Health Services, under the MoHFW is responsible for operation and enforcement of the Act.

• The Essential Commodities Act, 1954 has a number of control orders to regulate manufacture and production of food.
The Fruit Products Order, 1955 (FPO) which regulates fruits, vegetable products, sweetened aerated drinks and other like products, is operated by the ministry of food processing industries through the Central Fruit Products Advisory Committee. The ministry issues the license for manufacture and labelling of these products. In addition, there are specific orders for solvents and edible oil, flour, meat.

• BIS is an apex standard setting body in the country. It has statutory powers and was set up under the Bureau of Indian Standards Act, 1986. Till now BIS has specified standards for close to 17,000 products/items/technologies. Out of these, standards for only 168 commodities -- mass consumption products affecting consumer health and safety -- are mandatory via various acts or notifications of the government.

• The Director of Marketing and Inspection formulates standards known as AGMARK, under the provisions of the Agriculture Produce Grading and Marking Act and Rules (1986 and 1988). These standards certify quality in products. There are also non-starter schemes, like the ECOMARK, of the Union ministry of environment and forests (MoEF), which specifies standards for labelling environmentally friendly products.

• In 1995, the government appointed a task force under the chairpersonship of retired Justice E S Venkataramaiah to suggest a simplified and harmonised food law. The task force asked for a "paradigm shift in the legal framework to promote good manufacturing practices". Then the prime minister's council on trade and industry appointed a subject group on food and agro-industries headed by industrialist Nusli Wadia. It also called for harmonisation of laws under a single authority. Currently a group of ministers under the ministry of food processing industries is working on a comprehensive legislation on food standards. Whose interest will these new harmonised standards serve? That is a matter of frightening speculation.

• The March 25, 2003 report of the Satwant Reddy committee on pesticide residue in packaged drinking water and packaged natural mineral water makes important recommendations on standard setting in general (see box: "Reddy" remedies). But as yet, little is moving on this front.

These are glimpses into a regulatory scenario that's quite nightmarish in its criss-crossings and cross-cuttings. If today, there is a clear need to regulate industries that are a challenge to public health, then the legally enforceable means that are available are nothing but swathes of cobwebs. If today, there is a clear need for regulatory institutions that are scientifically competent, then the current state of knowledge on cutting edge research and capabilities is bathetically minimal. If today, these institutions must become as powerful as industry in order to turn gazette notifications into a public good, then government lacks both brain and brawn.

This is one reason: "One should not be afraid of pesticides. They are in fact friendly and responsible for making us food sufficient" -- O P Dubey, assistant director-general at the Indian Council of Agricultural Research quoted in the national daily Times of India on the issue of bottled water standards. This is another: "It will be premature for India to take a decision to adopt a strict standard" wrote Amit Mitra, secretary-general of the Federation of Indian Chambers of Commerce and Industry in a letter to the health secretary, on standards for bottled water.

Whatever agricultural scientists or industry bodies say, the larger issue that emerges from both the bottled water episode and now the test results is the need for stringent and quantified norms for pesticide residues in drinking water and other kinds of food. This has to be based on the available science of pesticide residue impact on human health. How does one determine this safe level? It requires a high order of scientific research on chronic exposure levels. It requires regular and periodic reviews of the latest research on the toxicity of these substances. Unfortunately, India, with its bombastic claims of scientific capacities, has neither worked on collecting evidence from pesticide use, nor done much toxicity research.

These processes can be put into motion. Till that happens, Indian standards for pesticides would have to be based on the standards set up different international agencies or governments, namely the World Health Organization (WHO), Food and Agriculture Organisation (FAO), the US Environment Protection Agency (USEPA)/Food and Drug Administration (FDA) or the European Union (EU). Most agencies stipulate different limits for different pesticides, whereas, EU under its norms, has agreed on a value, which is low enough to ensure that no chemical is toxic to the human being.

But ad hoc choosing from different sets of regulations could become a completely meaningless activity, simply because there would be no scientific basis selecting a particular norm from say, WHO in one case or USEPA/FDA in another.

The greatest danger is that new norms could become lax. Let's take an example.

Suppose we were to extend the spirit of the bottled water norms and make drinking water standards to regulate the pesticide chlorpyrifos. We could begin with WHO and FAO. They have separately, and jointly under the Codex Alimentarius Commission, set global guidelines for pesticide residues in food. These are minimal guidelines. The agreed norm is that countries should set higher norms based on their individual conditions. So, for instance, WHO has recently issued draft guidelines for drinking water quality, in which, the proposed guideline limit for chlorpyrifos is 0.03 mg/l.

But recent research indicts this pesticide. A new study based in New York found that women exposed to chlorpyrifos during pregnancy gave birth to babies with reduced birth weight and reduce head circumference. This, researchers noted with worry, was when the mothers had very low levels of exposure to this pesticide. Thus if we were to go for chlorpyrifos norms, would the WHO guidelines not be inadequate?

Consider other complications. In 2000, Dow Chemicals was forced to withdraw Dursban (Dow trade name for chlorpyrifos) from residential and commercial use in the US. Currently its use is restricted in agriculture and USEPA is working towards a complete phase-out by 2005. But Dow is now busily promoting this chemical in countries like India. Needless to say USEPA has not put any restriction on export of chlorpyrifos. During 1999-2000, it was the fourth most used insecticide in India with an installed manufacturing capacity of around 14,000 tonnes. Therefore, selecting a lax WHO guideline for this pesticide would be irresponsible, to say the least.

We do not have a pesticide policy in the country, to regulate this powerful industry and ensure the chemicals registered and sold are 'safe' for use. More importantly, as information about toxicity of pesticides only trickles in after these 'wonder' chemicals have been sold and we have been duped, our regulatory mechanisms need to be geared towards constant review and recall. Even more importantly, the policy must set the framework of research, innovation and experimentation, to introduce a new generation of environment-friendly pesticides in the country. This business must begin in earnest.