Consuming vegetables contaminated with heavy metals and pesticides can lower a child's intelligence, warns a study 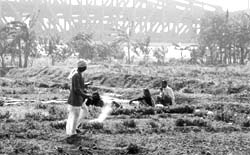 In 1994-96, the food and nutrition department of the Punjab Agricultural University (pau) conducted an intelligence quotient (iq) test among children, between the age group of 10-12 years. The children were from two different places -- a tubewell-irrigated area of Daad village, six kilometres from Ludhiana city and Chaori Mohalla, a sewage-irrigated area near Ludhiana. Children were selected from families with a per capita annual income between Rs 2,400-4,800 and Rs 4,800-9,600 respectively. The findings were startling. "Children in the sewage-irrigated area exhibited comparatively poorer performance," says C K Hira, a member of the team that conducted the study.

The reasons are many. The researchers found that levels of lead, cadmium and nickel in crops of the sewage-irrigated area was highest in green vegetables followed by roots and tubers. For example, they found lead levels of 7.8-30.6 microgrammes per gramme of spinach in the sewage-irrigated areas. Hira says this is because Budha nullah , which is used for irrigation, is contaminated by effluents from several electroplating and dyeing industries located in the area. On the contrary, in the tubewell-irrigated areas, negligible levels of metals were found.
"Vegetables that are sold in the markets are grown near nullahs or drains and are sprayed with pesticides and washed with the same contaminated water," says Soumitra Bharadwaj, a Delhi-based physician. "The chances of being affected are very high among children because they are in the growing stage. Sewage water contains certain quantities of heavy metals that affect the brain functions. This lowers a child's iq," he adds.

"Of all heavy metals, lead is found to have the highest neurobehavioural effects," says S B Lall, additional professor of National Poisons Information Centre at the department of pharmacology, All India Institute of Medical Sciences (aiims), New Delhi. She says that intake of heavy metals can retard growth, create hyperactivity, limit the attention span and lower the cognitive and behavioural scores of children. This happens because heavy metals have a tendency to bond with the red blood cells (rbc) membranes. "Recent studies show low levels of zinc in the body leads to decreased iq in children," says Lall. The zinc level drop when other heavy metals like cadmium increase. "So there should be an equilibrium," explains Lall.

Sridhar Sharma, former director of Shahdara Mental hospital, Delhi, says: "Lead and arsenic are capable of damaging the brain. They can have a major impact on the learning ability of a child". Most pesticides are carcinogenic and excreted through the kidneys. "Lead is found to lower intelligence among children as it damages the neuro transmissions," says Bharadwaj. According to Achal Bhagat, a senior psychiatrist at the Apollo Hospital, New Delhi, "Pesticide lowers the ability of a child to perceive things by reducing their attention span and sorting ability (ability to differentiate things)." It also makes children "clumsy as it affects a part of the brain responsible for cognitive abilities, and if it continues to enter the brain, it can affect the child's intelligence," explains Bhagat.

The team submitted a report to the Central Pollution Control Board on the alarming state of heavy metals in the soil of the region. "We hope the board does something about this," says Hira.