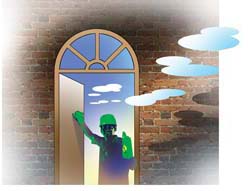 A report on discrimination at work place brought out by International Labour Organisation (ilo), which had said that dalits in India are denied jobs due to "caste discrimination", has evoked mixed reactions from trade union leaders and activists.

The report titled 'Equality at work: tackling the challenges' released on May 10, said: "Dalits are excluded from work opportunities in the area of production, processing or sale of food items and services in the private and public sectors in India." It also said that although law prohibits practice of 'untouchability', caste remains a dominant factor in defining the economic and social status of dalit men and women in India and Nepal. "Limited access to education, training and resources, such as land or credit, further impair their (dalits) equal opportunities for access to non-caste-based occupations and decent work," the report said. While acknowledging that affirmative actions by Indian government has enabled marginal number of dalits in obtaining formal jobs, the report says that such initiatives have failed to lead to an even progress in providing equal opportunities to all.

According to Tapan Sen, general secretary, Centre of Indian Trade Unions, "The percentage of numbers of Scheduled Castes and Scheduled Tribes in government jobs including the public sector enterprise is below 10 per cent, while 22.5 per cent job reservation is being followed by successive governments since 1950." Experts say that due to globalisation, followed by shrinking job opportunities in the public sector, there is mass migration of workers from the organised sector to the informal sector, where discrimination against dalits or marginalised is more acute.

"The issues linked with movement of labour from traditional agriculture to low productive manufacturing and tertiary activities due to rapid emergence of few urban centres have not been the core of development debates on globalisation," says Amitabh Kundu, professor at Jawaharlal Nehru University, Delhi.

The report has also attracted some criticism. J John, editor, Labour File, feels the report has not dealt with caste discrimination with sufficient rigour. "It fails to register the growing consciousness among dalit workers, and the strong challenge they are posing against discrimination and inequality," says John.

The report has also made a pass-ing reference to implementation of National Rural Employment Guarantee Act, 2005. There is no analysis of its impact on poverty and gender equality. The report has only expressed concern about possible tensions in families over selection of a particular member to be given the job and about women being left out.