Caught between boars and bureaucracy

Authorities of a wildlife sanctuary propose to curb the menace of rampaging wild boars by providing affected villagers with, among other things, volleyball and television sets.

Caught between boars and bureaucracy 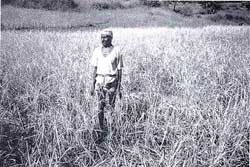 AFTER the reserved forests surrounding Bhimashankar, a pilgrim spot in Pune district, were converted in 1985 to what is now known as the Bhimashankar Wildlife Sanctuary (BWS), the 3,000 tribals living around it have been victims of animal terror. Wild boars, attacking in herds of upto 25, damage more crop than they eat and sometimes attack human beings.

Says Mahadu Ramchandra Mavle, the sarpanch of Patan -- one of the eight villages in the 131-sq km sanctuary, "All the 25 households in my village have been affected and more than half our crop has been destroyed. But we don't complain to the forest department anymore because it is of no use."

Before the reserved forest was converted into a sanctuary, the villagers were allowed to kill wild boars as vermin. Says Anand Kapoor, a civil engineer with the Maharashtra Arogya Mandal's Bhimashankar Project, a voluntary organisation working in the area for more than a decade, "Groups of villagers would chase and kill a boar using spears. Mass slaughter was avoided, yet the boar population was kept in check."

With the ban on killing boars, their population increased and became a problem. The tribals, who cultivate a single kharif crop of paddy, groundnut and a millet on tiny patches of land in the hilly region, have to keep round-the-clock vigil, spending nights in machans beating tins and shouting themselves hoarse to keep the animals at bay. "But when a big herd comes, we run for our lives," says Mavle. "Even tigers leave such herds alone."

The boars often attack crops on the outskirts of BWS. In Kondhre, Ramchandra Umaji Asavale and Dunda Budhaji Asavale lost 480 kg of groundnuts. Of the 1,000 bamboo saplings Pandurang Asavale had recently planted at a cost of Rs 3 each, 950 were destroyed. In October, 13 villagers of Borghar lost 820 kg of groundnut and 220 kg of paddy. In Ahupe village, 68 farmers lost about 5,400 kg of paddy worth nearly Rs 30,000.

The Delhi-based Centre for Science and Environment joined a concerted campaign launched in 1989 by Ekjoot Sanghatana (ES), a people's organisation of the area. "Environmentalists Sunil Roy and Anil Agarwal recommended that culling of the boar be allowed," says Kusum Karnik, who has been with ES since its inception. In May 1989, the ministry of environment and forests wrote to chief wildlife warden of Maharashtra R L Choudhary: "It appears to be necessary that controlled killing of wild boar attacking agricultural crop be permitted. However, it should be ensured that such permission does not result in the decline of the wild boar population beyond a critical level."

However, there is little hope of relief from the indifferent bureaucracy. Recalls Kapoor, "The bureaucracy took its own time to act and two shikaris were sent when the season was over, sometime early in 1990. We were amazed to see them one day, armed with antique guns. They had orders to find old male boars and kill them."

According to Mavle, who has "been seeing herds of wild boar since my childhood", it is impossible to single out an old male in a charging herd as no one waits for the herd to come close enough. The shikaris hung around for a few days and left. Nothing has happened since. The people and the ES, however, demand regular culling of the boar by the locals be allowed. "If you are keen on maintaining a balance, it's no use letting the boar population rise and then suddenly kill a few of them,"says Mavle.

Besides, the villagers don't get compensation for crop damage. Forest officials in Pune plead helplessness. Explains BWS director Dinesh Kumar Tyagi, "The laws don't permit us to compensate the villagers for crop losses, but we have suggested a crop insurance scheme."

But Kapoor is sceptical of government proposals to start crop insurance schemes, "Who will pay the premiums? The people don't have any money." And, though no official survey has been conducted to assess crop damage, Tyagi contends the villagers always exaggerate their losses in the hope of getting some compensation. "Everyone talks of (the menace of) increasing wildlife population, but why doesn't someone take a look at the rising human population, which has led to encroachment on the animal habitat in the area?" asks Tyagi.

Tyagi claims the boar population hasn't risen very substantially in BWS and allowing continuous culling would be disastrous. Instead, he suggests, "our eco-development plan will solve the villagers' problems".

The eco-development plan has very ambitious goals, ranging from generating employment to entertaining the villagers by providing volleyball equipment and television sets to watch Madonna croon on MTV, because otherwise the villagers "may indulge in anti-conservation activities during their idle time".

Not surprisingly, the plan has not caught on. Says Ramchandra Nauji Damse, a 55-year-old farmer of Kondwal, "They have made an eco-development programme to improve our conditions and our crops, but instead of doing something about these raan dukkars (wild boars), they plan to train us in volleyball. How can we think of playing on an empty stomach?" Says another resident of the same village, on the assurance of anonymity, "Maybe its a scheme to remove us from the forest."

"They want us to use solar cookers and biogas plants, but instead of rice, maybe they would be happy if we cooked our children and ate them -- the boars don't leave any rice," says a woman of Ahupe, on condition of anonymity. Another woman adds, "They want us to play volleyball and kabaddi , but who has the time for all that? It would have been better if they solved our drinking water problems first."

Kapoor says, "Solar cookers and solar street lights can't function in an area where it rains for six months a year. When it does not rain, sunlight is not available till almost noon, due to mist and fog. To cook the evening meal using solar cookers is not possible as both men and women are out at that time, working in the fields,."

And, in the villages, the traditional stoves are used not only for cooking but also to keep the house warm, drive away insects and dry clothes. According to Kapoor, the biogas plants won't work because it's too cold in winter and even summer temperatures are not conducive enough.

He argues that plans to develop cottage industries or starting sericulture or horticulture in the region might fail in the absence of markets and the ignorance of the tribals about the intricacies of a market system. "How can they draw up a conservation plan excluding the people from it? Why are the tribals not allowed to manage BWS and maintain its biodiversity, as they have been doing for centuries?" Kapoor asks.