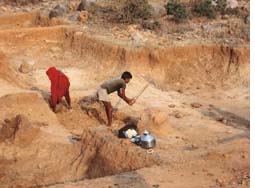 The last five years have been tough on 55-year old Saraswati Devi. Her two sons have left their village to work as construction workers in Jabalpur, Madhya Pradesh (mp). The family's one hectare patch in Ragauli Bhatpura gram panchayat in Uttar Pradesh's (up) Banda district has been mortgaged. The money barely helps Saraswati tide over a drought that's ravaging Banda and 12 other contiguous district in up and mp for the last five years. Quite ironical because the region--historically known as Bundelkhand--has a rich history of water harvesting.

The current spell is the longest and most severe in the region's recorded history. Government records show that Bundelkhand had only 12 years of drought in the 19th and 20th centuries. But the arid spell has already lasted five years this century.

Crop failure and debt has driven more than 400 farmers to commit suicide in the seven districts that make up the up part of Bundelkhand. Starvation deaths have also being reported. Acting on these, the up government declared Banda drought-hit (more than half of the crop affected) in December 2006. Chitrakoot, Mahoba and Hamirpur districts were also declared drought-hit.

But, says an official of the state's information department, these districts were declared 'drought-hit' on the basis of deficient rainfall. According to official data, annual rainfall in the up part of Bundelkhand was between 500 mm-700 mm in 2004-2005, against the state average of 1,000 mm. "We have not made any assessment of the crop loss," the information department official says. But he also speculates that "more than 50 per cent of the crop has been affected because of reduction in monsoon months and days."

Panchayat Adhyan Sandharv Kendra, an ngo working in Bundelkhand, puts the losses due to crop failure in the up part of the region at Rs 8,000 crore in 2006. Another estimate by up's disaster management department, says that the drought claimed more than Rs 7,500 crore worth of crop, livestock and property in 2002. The department reckons that losses amounted to Rs 7,200 crore in 2004. They are likely to be more this year as more districts have come under the grip of the drought.
Seventy-five per cent of the people in Bundelkhand depend on agriculture and more than 80 per cent of them are small and marginal farmers. But 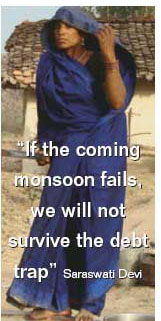 agriculture has virtually come to a halt. "Locked houses are a common sight in Budelkhand, " says Bhagwat Prasad, director, Akhil Bharatiya Samaj Seva Sanasthan (abss), an ngo that works in the region. Vidya Dham Trust, another ngo working in the region, has come out with a study which notes that 33 of the 200 villages in Narayani block of Banda district are deserted. "Every sixth village in the block is deserted," says Vidya Dham's secretary Raja Bhaiya.

In Ragauli Bhatpura, at least one male member from each of the 500 families has migrated to cities such as Allahabad, Gwalior, Agra and Delhi for livelihood. "But these migrants do not earn enough to support the elderly back home," says Raja Bhaiya. Saraswati Devi has been surviving on two loans one amounting to Rs 25,000 from a public sector bank and another Rs 15,000 from a local moneylender. The latter charges an interest rate as high as 25 per cent per annum. "If the coming monsoon fails, we will not survive the debt trap," says Sarawati Devi.


Saraswati Devi's village has four tube wells. These have dried up in the last one year. The water table has plummeted to as low as 450 feet and in some places even lower than that. "We got water at 100 feet even two years back," says Raja Bhaiya.

All this is very ironical because Bundelkhand has a rich history of tanks and other traditional water harvesting structures. In fact, even now many people in the region depend on tanks for irrigation. But experts say that government involvement in maintenance of tanks and other rainwater harvesting structure has eroded the sense of community ownership.

Studies conducted by ngos and other agencies indicate that in the last 20 years, canals and tube wells have become the predominant sources of irrigation in Bundelkhand. "Most of the traditional structures have fallen into disrepair or have completely been destroyed," according to a study by the New Delhi-based ngo, Development Alternatives, 'Developing water sustaining livelihoods'.

A study on traditional and modern water resources systems conducted across 60 villages in the up part of Bundelkhand reveals that more than 54 per cent of wells are in unserviceable condition and more than 50 per cent of ponds have dried up (see table Dry repositories). The study was conducted by Church's Auxiliary for Social Action (casa) and Jan Kendrit Vikas Manch--a network of ngos in Bundelkhand. "Indiscriminate felling of trees, over exploitation of groundwater, excessive chemical fertiliser use, soil erosion, low groundwater table and scanty rainfall contribute to the drought situation in Bundelkhand," the study says.

The number of open wells (which recharge groundwater) have increased but only marginally. In Jalaun district in up, for example, they increased from 2,134 in 1995 to only 2,153 (an increase of only 0.89 per cent) in 2004. "The slow rate of increase in the number of open wells seriously affects water supply to the rural population," notes another study by the ngo Parmarth Samaj Sevi Santhan. The study attributes the region's water scarcity to the recent tilt towards water intensive crops, change in tillage practices and excessive use of fertiliser in agriculture. In the last 20 years, source of irrigation in the district has changed from open wells and ponds to tubewells. "Government subsidies for installing hand pumps to exploit groundwater has compounded matters," says Sanjay Singh, secretary of the ngo.


Eight of the 13 districts in Bundelkhand are covered under the National Rural Employment Guarantee Act (nrega), 2005. 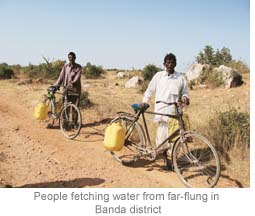 With its provisions of reviving traditional water harvesting structures, the act could have been the right instrument to correct matters in Bundelkhand. But an analysis of works initiated under nrega reveals that only 22 per cent pertain to water conservation, around 24 per cent of works are for renovating water bodies and 18 per cent of the works relate to drought proofing. About 30 per cent of the projects pertain to construction of road. Rs 100 crore has been allotted for nrega work in the eight districts. But around 40 per cent of that goes to road construction (see graph NREGA big on roads).

Six of the seven districts that constitute the up part of Bundelkhand are covered under nrega. But even here, water conservation does not get much priority and a large number of projects remain incomplete. In the acute drought-affected district of Banda, for example, only 49 of the 923 nrega projects pertain to water conservation, while 201 are road construction projects. Out of the 49 water conservation works only five have been completed.

Things are no better in Chitrakoot. Out of 701 projects initiated under nrega, only 18 pertain to water conservation, while there are 157 road construction projects. J P Singh, Chitrakoot's district development officer admits that 375 nrega projects have not been completed in the district. For example, repairing and desilting of Mancharia talab (pond) in Jaganathapuram gram panchayat has been stopped because of 'lack of funds'.

Shortage of funds have also held up another pond digging project in adjoining Tekeria gram panchayat. Rs 7.63 lakh had been sanctioned for the project and the first installment provided by the block development officer of Manikpur in February 2007. But state government officials say that subsequent installments were put on hold because of the recent up assembly elections. More than Rs 2.6 crore has been sanctioned under nrega in the Manikpur block of Chitrakoot, says an official supervising the implementation of the project in the block. "But more than 50 per cent of them relate to road construction," he says.


"nrega is implemented without any vision in Uttar Pradesh," says Arundhati Dhuru, adviser, Supreme Court's right to food campaign for the state. Things are as bad in neighbouring mp. Two Bundelkhand districts in this state are covered under nrega. But works here do not conform to local requirements. In Chattarpur district, out of 3,422 works initiated under, only 467 are related to water conservation and 609 works are linked to drought proofing while 785 works relating to rural road construction have been taken up. In Tikamgarh district, out of 12,663 works initiated, 461 are linked to water conservation, and 609 pertain to drought proofing.

But there is some hope. The Bhasonda gram panchayat in Chitrakoot district has been waiting eagerly for the monsoon to set in. Digging and widening of two ponds--Debi talab and Thwela--have been finished under nrega. If the monsoon sets in on time, it would serve close to 5,000 people.

Ponds like this can solve Bundelkhand's problems. Parmarth's study on traditional water resources noted that Jalaun's water problems can be solved if only 3 per cent of the district's rainwater harvesting potential is tapped. Given nrega's focus on water conservation, this is highly attainable and drought completely avoidable.