Automakers are realising the advantages of four-stroke engines. But fuel cells and electric vehicles remain the industry's orphans 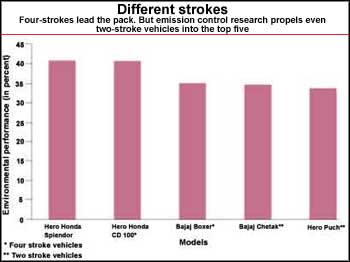 when Brij Lal Munjal of Hero Honda Motors decided to invest in four-stroke engines in 1984, industry circles thought it was quixotic. This was the time when two-strokes were ruling the roost. But the gamble paid off. Today, he is laughing all the way to the bank. Four-stroke engines have proved to be superior to two-stroke in more ways than one.

The analysis clearly shows the overwhelming superiority of four-stroke two-wheelers over two-stroke two-wheelers with respect to emissions and fuel efficiency. Still, 60 per cent of the two and three-wheeler segment is two-stroke. Despite the benefits, half of the two-wheeler companies have not taken any initiative to move to lesser polluting options. But some companies like Bajaj have invested in research to control emissions from two-stroke engines. This explains their standing in the top five product ratings. Similar research for four-stroke engines would have revved up their environmental performance.

However, there are better options that haven't made inroads in the auto sector. One of them is the hybrid engine. These use both gasoline as well as fuel cells and emit just half of that of four-stroke engines. Electric vehicles, of course, are the best because they have zero tailpipe emissions. However, none of the companies are moving towards these options.

Electric three-wheelers produced by Scooters India Ltd are one of a kind in India. The proportion of total products produced by a company on various engines (corporate engine performance) is a good indicator to reflect the overall environment performance of the entire product-range of a company. Going by this parameter, grp found that almost all companies had a poor corporate engine performance record. This is because of their reluctance to invest in cleaner technologies like fuel cells.