A development project, which has got patronage from the panchayat, is changing the face of many villages in North Bengal 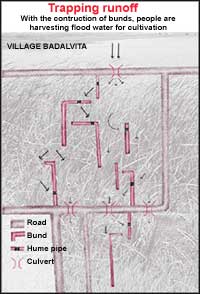 Devastating floods ruined Bhavesh Mandal's crops in the late 1960s. The hapless farmer had no option but to migrate to Mumbai and work as a masonry worker with no roof over his head. However, thanks to the North Bengal Terai Development Project ( nbtdp ), today Bhavesh is back in his native Changmari Dangapara village. Now a self-sustained farmer, Bhavesh is growing five crops a year. Says Bhavesh, "Earlier, we could never grow jute and potato, but now we have 450 kg of jute per bigha and about 500 kg of potato."

Bhavesh is not alone and neither is Changmari. There are many like him in several villages across Cooch Behar and New Jalpaiguri district of West Bengal who have got a new lease of life, cour-tesy the nbtdp . Through the project, the runoff land has been treated leading to the increase in rainfed cultivation. With the support of the project officers and agricultural department, the villagers have undertaken runoff control measures and built peripheral bunds , dykes and gully control structures (see diagram). Today, sand reclamation has successfully been done on 160 ha of land. The water table in the area has increased by seven to eight metres. And as Jitendra Nath Singha, president of the Badalvita panchayat points out, "The annual yield of paddy which was 160 kg to 240 kg has gone up to 400 kg to 480 kg."
In 1984, the nbtdp project was initiated by the government of West Bengal and the government of Netherlands through the department of economic affairs, government of India. The project achieved very little initially but during Phase III stage in 1993 with the entry of Rajeshwar Mishra, a social veteran from Patna and Frank Van Steenbergen, water expert from the Dutch consulta-tion group Arcadis Euroconsult, the gap between the community and govern-ment started bridging up. Earlier, every-thing was implemented through the department of agriculture but in Phase iii a Project Support Unit ( psu ) was formed that focussed on social mobili-sation. Slowly and steadily, villagers got sensitised and started taking up the activities themselves and turned from being passive beneficiaries to active par-ticipants. Today, the psu has motivated the farmers to construct fish ponds which store water. These structures are being maintained by the villagers them-selves. The villagers are also planning to plant saplings across the bunds . A bene-ficiary committee runs the river lift irri-gation system and has taken the respon-sibility of distributing water to 50 bighas in Changmari Dangapara village.

Mishra and Steenbergen made many changes in the project component to make it reach those who needed it most. Both the West Bengal and the Dutch government supported the changes. "The government accepted the innovations and while passing a resolu-tion integrated them in their panchayat programme," says Mishra. Now the research is carried out by the psu and the agriculture department executes it with the help of the panchayat . This network-ing approach is really working out. The nbtdp team made simple innova-tions and modifications in technology, economy and society to suit the natural conditions.

The psu found that the loamy soil was leading to water loss on the fields in Cooch Behar. So, a mixture of soil, cement and sand for building channels on low cost was invented. Similarly, the diesel pumps were highly inefficient and a new type of pump was invented (see box: Tinkering with technology ).

Besides, the government specified galvanised iron pipes were not appro-priate for the shallow tubewells. The psu with the knowledge of the villagers came out with the bamboo filter which has bamboo rings and lateral bamboo strips wrapped into a mosquito net. Another invention was the treadle pump which replaced the dangerous old bucket system.

The psu has been instrumental in reviv-ing the ferry service in Madhupur vil-lage. The ferry service started by the Haskhawa Ferry-ghat Parivahan Samvaya Samiti in Cooch Behar ran into trouble because of the contractors. But the psu people mobilised the vil-lagers and through a sustained cam-paign helped them raise a fund of Rs 42,788 which was used as bidding money to get the rights for restoring the ferry service.

To impart a spirit of creativity, the nbtdp has started giving the "innovation award" every year to villagers who come up with new inventions. This year the award went to a farmer who developed a high yielding hybrid variety of chilly.

The psu has also formed mistry samitis which maintain and promote pumpsets, bamboo filters and treadle pumps. There are beneficiary commit-tees which are playing an active part in maintaining and running the river lift systems and water harvesting structures.

With encouragement from the psu , the womenfolk have formed self-help groups in many villages. A major suc-cess has been achieved in the village where the Rabha community lives. The nbtdp has changed the face of this village. "Before the project came to the village, we were disorganised and led an unplanned life. After the project, we have learnt new sources of income," says Gonath Rabha. Most importantly, the women have come to the forefront and taken stock of the situation. Five women groups have been formed in the village. They have been revolving funds of about Rs 3,000 and maintain-ing a fixed deposit of Rs 10,000. Neeran Rabha, one of the cashier of the groups, informs, "Loans for mar-riages or money for buying cattle and other activities are taken from the revolving fund. And it is returned at an interest of five per cent per month." These groups have also built a bund through collective effort and they are now cultivating paddy. All this has changed the village economics (see box: Women wisdom ).

Meanwhile, the bond between the villagers and psu members is growing in strength.The nbtdp project has been extended. The psu team is also all set to carry its activities further in these vil-lages. For this, the team members have registered themselves as Centre for the Development of Human Initiative ( cdhi ) and acquired a land near Jalpaiguri for the purpose of research and agricultural practices. This will sup-port more and more villagers.