Community welfare works as a contraceptive

In Pakistan, they are controlling population growth by raising the living standards of local communities through Pasbaan, the social development wing of the country's family planning association

Community welfare works as a contraceptive 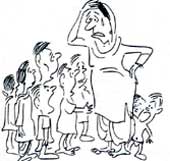 DESPITE resistance from his country's religious leaders, Pakistan's Prime Minister, Nawaz Sharif, is going ahead with plans to implement a comprehensive family planning strategy. And this is being done through Pasbaan, the social development wing of the Family Planning Association of Pakistan (FPAP).

Pakistan, with a projected population growth of 100 per cent over the next two decades, finds itself under stress, both economically and environmentally. The 32nd largest country in the world, Pakistan has the world's ninth biggest population -- over 122 million, according to UNDP estimates for 1990. The country's annual population growth rate of around 3 per cent is far higher than the South Asian average. The World Bank forecasts that its numbers could swell to 285 million by the year 2025.

The resulting strain on the land, water and food resources of the country can well be imagined. It would be a miracle if the present, wholly inadequate, standards in health, education services and employment opportunities can be maintained even at their current levels.

In a bid to rise to this challenge, the government formally adopted the National Conservation Strategy (NCS) this March. The NCS is an integrated programme that "involves improving the role of women in society, upgrading of human resources through increased allocation for education and health, introducing community-based participatory institutions in rural areas and encouraging mobility out of fragile ecosystems."

Pasbaan has been one of the agencies involved in evolving this blueprint. Says Pasbaan's senior director, Yasmin Shahid, "The environment has always been part of our activities -- in fact, we produced one of the first environment posters seen in Pakistan way back in the early 1970s, but since then, the issue has been even more in focus." For instance, according to Shahid, when Pasbaan talks to women about their environment, it is about their immediate surroundings, their personal hygiene, their access to clean water and sanitation, and other related issues. It also adopts a lot of appropriate technological aids, which are easy to use and affordable, to solve community problems.

The institution has a symbiotic relationship with the government, which the NCS, once implemented, is expected to strengthen. Explains Shahid, "Our objective is to set up demonstrative models which the government can then take up on a national scale. So, in that way, we are working together. But as an NGO, we are more flexible and can be more innovative."

Pasbaan's programmes are carried out through 157 work units located across the length and breadth of the country. With 55,000 volunteers involved, it comprises the widest NGO community network in the country. The work units are run by volunteers and are autonomous community action groups. The 13 field offices and five zonal offices train, support and advise the work units, but the volunteer groups implement the programmes. "One of our biggest successes -- and something we are really proud about -- is leadership development at the grassroots level," says Shahid.

How does Pasbaan do this? First of all, as a regular feature of its programmes, group sessions are held with local women. Explains Shahid, "The next step is an orientation workshop where we get together the women who are very active in the groups for three days. They talk about their problems, assess their needs and then we get them to start projects for themselves."

Groups are instructed in project formulation, project management, reporting, accounting and the formalities of setting themselves up as independent NGOs. Some of the youth groups have apparently been so successful that they are now receiving funds from other donor agencies. Other initiatives have grown out of these women's and youth groups: over 1,200 women have been provided with loans for income-generating activities.

The project has had to overcome many barriers. Women in Pakistan, particularly in the rural areas, are not used to organising themselves and Pasbaan has met with suspicion and even hostility from the local men.

Yet the success of the programme testifies to fact that this initiative has, at least partially, been able to win over the men. As Shahid puts it, "One of the reasons the women's programme is so successful is because this is probably the only chance they get; the only time they are given any importance; that they are being heard; that they are being told that they have a lot of potential. Obviously we need the support of the men; after all our primary objective is family planning, so you have to have the men with you!"