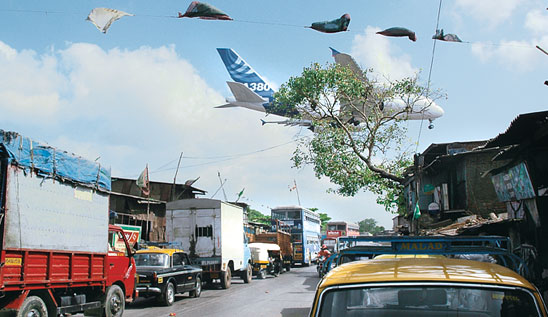 Every month six aircraft are added to the Indian airspace. In 2006-07, 60 million people travelled by air in the country--half of them preferred other modes till five years ago. The aviation sector is indeed growing at a steep rate. Here is the downside congestion, flight delays and diversions; all leading to enormous fuel wastage. The average wastage of fuel per flight operating between Delhi and Mumbai, the two most congested airports in the country, is 30-40 per cent, says Ravi Capoor, the executive director of the Petroleum Conservation Research Association, an energy auditing agency.

Ever since the domestic open-sky policy came into force towards the end of 2003, the stage was set for the entry of private carriers in a big way. The spurt in growth came in 2005 when three more airlines--Kingfisher, SpiceJet and GoAir--joined the Indian skies. At present, there are 10 major domestic airlines. In the pipeline are regional airlines. By 2012 the combined fleet of all airlines in the country would have increased by 480--India's aircraft-strength in March 2007 was 310. The good thing is India will have a fleet of new-generation, fuel-efficient aircraft, but this advantage will be nullified if infrastructure does not keep pace with growing traffic. Already there is congestion in the air.

Though fog is notorious for causing flight delays in winter, it is not the only culprit. Congestion resulting from inadequate infrastructure and manpower is also running up the aviation fuel bill. In 1997-98, the demand for aviation turbine fuel (atf) was 2,108 tonnes. This grew by 90 per cent to 4,008 tonnes in 2006-07. Demand is now breaching records. As per provisional figures available with the petroleum ministry in December 2007, 419 tonnes of atf was sold, the highest ever in a month.

While no exact data is available on fuel lost due to fog delays, it is estimated to be a sizeable 35-40 per cent, depending on the flight and the distance it covers, says an industry source. The worst-hit is the Delhi airport, which witnessed more than 800 fog hours between December 2006 and January 2007 (see box Fogged out). When the runway visibility range drops below 800 metres, the number of flights using a runway is restricted to eight in half an hour. Though the Delhi airport is equipped with cat III B instrument landing system that enables flight operations in poor visibility, aircraft operators prefer not to risk foggy conditions. On February 6, 2008, over 150 flights coming to and going out of Delhi were delayed by up to three hours, while 18 flights were diverted and 18 cancelled due to dense fog. This costs airlines a great deal.

Take an example of a plane flying from Mumbai to Delhi. Under normal conditions a new generation Boeing or Airbus will take two hours and use up 4,500 kg of atf for the journey . A number of pilots Down To Earth spoke to, said it was common in the two airports for a flight to stay in the air for an extra hour. For every hour a plane hovers in the sky, it consumes between 2,200 kg and 2,400 kg of atf. In case of a half-hour delay, it can consume between 25 and 30 per cent extra fuel. And if the flight is diverted, say, to Ahmedabad, it is another hour of flying time, and the plane will consume close to 80 per cent extra fuel.

Considering that the Delhi airport handles 600-650 flights every day, the total emissions and cost to airlines are huge. One hour of hovering costs an airline over Rs 1 lakh. There are over 40 flights that operate about 80 trips between Mumbai and Delhi every day. If all of them have an average circling time of 30 minutes each, about 92,000 kg (or 115,000 litres) of fuel will go waste. This means over Rs 44 lakh gone down the drain in a day. And we haven't even begun to count the national loss.

In terms of emissions, the 115,000 extra litres of fuel burnt every day between Mumbai and Delhi means 248.2 tonnes of co2 pumped into the atmosphere, or pollution caused by 161 small cars running for a year. Aviation fuel, which is a form of kerosene, produces about 2.158 kg of co2 emissions per litre consumed. These are rough estimates. Under actual conditions, fuel consumption depends on a number of factors, including fuel usage during take-off and landing. During take-off, fuel burn is the maximum, almost 8,000 litres an hour. During economic landing mode, fuel burn can be less than 300 litres an hour. Winds and jet streams also affect an aircraft's fuel efficiency.

Emissions from aviation in India have not been studied formally. The Hindustan Aeronautics Limited, along with the Indian Institute of Science, Bangalore, is conducting a study, which will be out later this year. Aircraft in India, says Capoor, consume 5-6 litres of aviation fuel to transport 100 passengers over a kilometre against the international standard of 3.5 litres.

A senior pilot with SpiceJet says at times because of congestion, air traffic controllers (atcs) instruct pilots to slow down while approaching an airport, which burns precious fuel by bringing the speed down from the optimum level. Fuel efficiency also depends on the height at which a plane flies. "Often due to congestion, if two flights have taken off in the same direction, the second flight will need to fly at a lower height to maintain a minimum vertical separation, shooting up fuel consumption," he says. 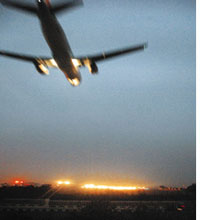 One of the long-standing issues has been radar integration, says an official of the International Air Transport Association. In radar-networked areas all radars are interconnected to give details about the position of all aircraft within a territorial zone. But radar integration is not possible because almost 40 per cent of India's civil airspace has no radar coverage. This leads to delays and underutilization of airspace. In areas with no radar coverage, a minimum separation of 80 nautical miles or 10 minutes of flying time is to be maintained against a gap of one minute 15 seconds for radar-networked areas.

Last year, the government decided to look into the issue, but industry insiders say the plan to integrate radars is a pipedream. "The problem with Indian radars is that they have not been supplied by a single vendor. Integrating these radars, which have been provided by three vendors, will be an uphill task," says a ministry official. Airports in Delhi and Mumbai use radars provided by Raytheon. Airports in Chennai, Thiruvananthapuram and some other cities use Westinghouse radars. Those in Bangalore and Hyderabad use radars provided by Selex. Integrating them into one system will be very difficult.

There is another technological glitch. atcs use the Radar Data Processor System and the Flight Data Processing System to monitor and guide aircraft into airports. Both the systems need to be integrated for safe landings and take-offs. Under an integrated system the data of flights are automatically read by the radar data processor to ascertain the number of flights approaching the airport. Only Delhi and Mumbai have the integrated system. In other airports the atcs have to constantly feed in flight data and also delete older data manually. This leads to diversion and wastage of time.

Dearth of trained atcs is another problem. In 2000, there were only 50 airports in the country. In 2007, the number climbed to 82. However, between 2000 and 2005 the government did not recruit a single atc. The Roy Paul Committee set up by the aviation ministry in 2005 had indicated that more then 200 atc posts needed to be filled up immediately. A report released by the Association of Chambers of Commerce and Industry in December 2007 stated that the number of atcs required in India could be as high 1,500.

An official of the civil aviation ministry, however, said India needed at least 4,000-5,000 atcs to ensure smooth operations. At present, there are only 1,500 atcs in the country. Delhi had just about 180 atcs, and it needs another 80-90 to handle air traffic, he added. Airports in Ahmedabad, Nagpur and Chennai also need to double their atc strength. Airspace over an airport is divided into sectors depending on the number of aircraft in the skies. Unless the airports get more atcs, they cannot open more sectors.

Is it possible to meet the demand quickly? The Civil Aviation Training College in Allahabad can train 160 atcs in a year. They will then need a year of basic training and three years of on-the-job training before taking up radar duties. Another facility being set up in Hyderabad will be able to train not more than 70 atcs. Both the training facilities cannot churn out enough number of trainee atcs in two years, forget about the trained ones. It seems India's aviation sector has taken to an unsustainable and wasteful course.