Creating history in a hurry

Creating history in a hurry

It was Sariska's best chance at redemption. It is more than three years since the Central Bureau of Investigation confirmed my expos in The Indian Express that the reserve had lost all its tigers to poaching. Between then and now, the authorities had all the time and opportunity to put the reserve in order before repopulating it with tigers from Ranthambhore.

But conditions in Sariska--and the attitude of the forest top brass--that had led to the local extinction of the striped cats four years ago, remain pretty much the same. The ground staff is as slack and inadequate, the traffic on forest road as busy, and the attempt to relocate villages as arrogant and ad hoc.

The only welcome change is the presence of the new conservator of forest (cf) and the new divisional forest officer (dfo)--two fine young officers who mean business. But they, and the new tigers of Sariska, will need all the luck with their bosses in Jaipur and New Delhi in a hurry to make history.


On June 28, officials at Ranthambhore and Sariska woke up early to rain that had kept up through the night and showed no sign of relenting anytime soon. Then around seven in the morning, the skies cleared over Ranthambhore. A desperate R N Mehrotra, Principal Chief Conservator of Forests, Rajasthan, immediately pressed a team of scientists from Dehradun's Wildlife Institute of India into action. 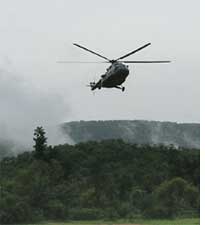 By eight in the morning, a 220-kg, four-year-old Ranthambhore male was captured, sedated and kept ready for the airlift. But the monsoon shower was still holding strong in Sariska. The officials and the media waited. As did the tiger, numb under drugs.

Shortly before noon, the designated iaf chopper took off from Ranthambhore with the tiger on board. But the drama was not over yet. The chopper was made to hang in the sky for a while as forest staff tried desperately to move a vehicle grounded in the middle of a slushy forest opening, serving as the helipad inside Sariska. Finally, when the chopper landed, its base went down several inches in the mud.

By the time the chopper stabilized, the tiger was fully awake in an iron cage lined with plywood. His eyes shone when an official flashed a torch through an opening. Then he growled in acknowledgement. In another 25 minutes, the robust, if not slightly overweight, male entered his new home--a one-hectare chain-link enclosure at Nayapani in Sariska. 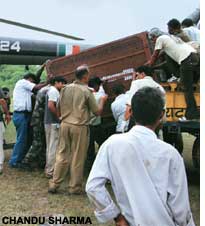 Another big cat--a tigress named Rani--joined the first male within a week. Three more big cats--two of them tigresses--are expected in Sariska in two phases over the next two years.


It is too early to predict if the striped cats will be able to reclaim this tiger forest. The suspense won't be over even when, and if, all five animals are released out of the enclosures. Sariska will have to wait for the second generation--a good litter--and then keep fingers crossed till the cubs grow up.

Similar experiments with panthers worked successfully at Florida in the early 1990s. However, as a rule, animals shifted from their territory show homing tendencies--there are numerous examples of how translocated leopards, bears, elephants, even crocodiles, travelled hundreds of kilometres to come back to their original base. 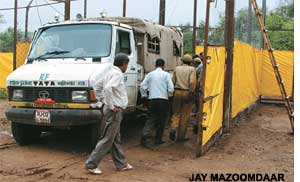 Experience with Amur tigers in Siberia showed how translocated tigers tended to move towards human habitations and trigger conflict.The present exercise has gone in for the soft release option-shifting the animals first to an enclosure -to counter this factor.

But keeping a big cat far too long inside an enclosure to numb its homing tendencies involves other risks. The first male translocated to Sariska was put on a goat diet-the forest staff cannot legally capture wild prey to feed the tiger-and too many easy kills inside the rather small enclosure might affect its prey preference permanently.

In such a scenario, the tiger would target livestock once let out of the enclosure. One solution would be to feed it skinned meat of livestock, but purists may consider that an attempt to numb the tiger's preying instinct.

All these factors make the duration of the tiger's stay inside the enclosure tricky--long enough to make it forget its lost territory in Ranthambhore, but short enough to keep its natural preference for wild prey alive. The field staff will have to take a chance and hope they get the timing just right.

It is true, the forest department needs some luck with the biological aspects of this experiment, but it cannot escape the responsibility for leaving too much to chance. The Centre's approval for the translocation plan came with certain riders. But the state has managed to push ahead with the plan without bothering to meet these pre-conditions. Consider the ground realities

Of the four strategically located forest villages--Kankwari, Kraska, Umri and Bagani--that had to be shifted before any tiger could be released here, only Bagani, the smallest of the lot in terms of population and, therefore, impact on the wildlife, has been relocated so far. The Centre had sanctioned Rs 19.2 crore for the villagers of Umri and Kankwari, but the high-handedness of top state officials has delayed the building of trust among villagers.

The decision to divert heavy traffic from the state highway that cuts through the reserve is hanging fire in the face of stiff resistance from local pressure groups.

Though some of the staffers responsible for conceding all of Sariska's tigers to poachers four years ago have been shunted out, many of them continue to serve at Sariska. And, to quote a top officer at the reserve, "forget ground monitoring, there is not enough staff for vip duties".

But Sariska may grab its last chance at redemption yet, provided the state government gets its act together and honours its commitment to secure the habitat. Four years ago, Sariska crafted an extinction that went beyond the worst doomsayer's predictions. If it fails now, the tragedy won't be of just another opportunity lost, but of a realization that not even the country's biggest conservation tragedy could stop us from repeating the same mistakes.

Jay Mazoomdaar is an independent journalist. He broke the Sariska story in January 2005 (With inputs from Chandu Sharma in Ranthambhore)