With the coming of the Rajiv Gandhi Mission on Watershed Development, a major change took place in the degraded wasteland that was Jhabua 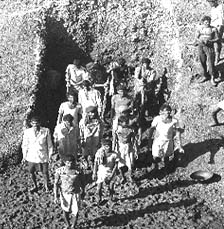 the ecological carnage that Jhabua has witnessed in the last five decades is sporadically mentioned in official records. Elder residents, however, remember how the dense forests once enveloped the district.

"Hardly 60 years ago, my home was surrounded by dense forests," says 90-year-old Dholji of Samoi village. "The forests belonged to the king and he allowed us to settle in it. At night tigers roamed around my home and my bow and arrows were ever on the ready."

Today Dholji's home is surrounded by fields. The forest and the tiger have both faded into the mists of time.

From 1963 to 1993 more than 15 per cent of the districts forest and village commons were turned into farmland. By 1993, the dense forest cover shrunk to 4.9 per cent of the geographical area. According to the National Centre for Human Settlement and Environment, Bhopal, the forest working plan for Jhabua in 1964-65 records that the forest cover was 33.3 per cent.

Amlia, an 85-year-old resident of Piplipada village, recalls: "Piplipada was inaccessible 50-60 years ago. My family was employed by the king of Jhabua as a guide for shikar (hunt). The forest was thick with sal trees. Suddenly, there was hectic tree felling and I was employed full time for it along with other villagers."

Golia, a landless villager of Piplipada, who earlier used to live on felling trees for merchants now protects forest lands for regeneration.

"Earlier the forests belonged to the king who never allowed large-scale felling," he says. "We Bhils depend upon the forest for our survival, we never intended to destroy it. Somehow the ownership of the forest changed and the government babus appeared. We saw them helping thekedars (contractors) felling trees. It continued till the forest was given to the gram panchayat (village council)."

While forest officials agree that there was uncontrolled felling of trees, they blame it on the rapid increase in population and resulting pressure on land being brought under the plough.

But, at that time, some people came and told the villagers that the forests belonged to the tribals and they should encroach on them for agriculture. Villagers started clearing the forests for agriculture and constructed houses in different hamlets. The post-independence socialist movement hawked encroachment of the forest, motivating the Bhils to convert their private forest lands into agricultural lands to strengthen their rights on it. This led to faster deforestation.

Deforestation resulted in the cultivation of the uplands and brought in its wake the ecological disaster which resulted in a loss of land productivity. It also meant fewer jobs, less income and migration of labour to towns in search of jobs.

Nagu Bhai, a 40-year-old resident of the catchment area of the Hathipawa microshed, and a member of the village forest committee, recalls: "When I was a child the hills were covered by thick forests. They were our only source of livelihood and never failed to sustain us. When the forest vanished, we were orphaned. Only then did we realise that the forest was our god. I had to sell my cattle, as no fodder was available and migrate for months in search of work. But this year I didn't have to migrate, I had surplus fodder and didn't sell my cattle, because I protected the hills."


When the Rajiv Gandhi Mission for Watershed Development, ( rgmwd) came to Jhabua on August 20, 1994, it came to a tormented and tortured land. But it came with a healing touch, mending the scars of an ecological ravage.

A decentralised and time-bound programme, the rgmwd started with the objective of improving 12 lakh hectares (ha) of land through watershed treatment within four years.

Previous watershed management programmes had failed to produce the desired results. Unlike the rgmwd, where all activity was put under one body for coordination, these projects were implemented in segments by different departments. Relief operations were ad hoc in nature and soil and water conservation was never given any importance. Implementing agencies also lacked proper guidelines on watershed design and planning. The people were never consulted.

The mission broke all the rules. The people, instead of the bureaucrats, became the decision makers. In 1996 the target of the rgmwd was revised to regreening 28 lakh ha, one per cent of the nation's total land area covering 6,691 villages through 5,024 watersheds. The mission was introduced in 42 of the 45 districts of mp. The mission was started in October 1994 in Jhabua where at present 218 micro-watersheds function, covering 1240 sq km of land - nearly one-fifth of the district. With 12 government agencies and seven non-governmental organisations (ngos) as project implementing agencies, Jhabua has become a model of watershed management.

Surprisingly, the mission was the brainchild of a bureaucrat who was to have been taken into the technology mission initiated by Rajiv Gandhi. R Gopalakrishnan was the collector of Jhabua when it was reeling under the worst drought of the century in 1985. Today he coordinates the Rajiv Gandhi Mission (rgm). It was his experience in Jhabua which inspired him to look for a green poverty eradication measure.

In a research paper for the Hubert Humphrey Fellowship in Cornell, usa , Gopalakrishnan wrote, "The problem of poverty faced by people living in drought-prone districts is linked to the environmental degradation there... this calls for action which can address the linkage."

"Jhabua made me certain that we needed one such system under which not only the problem of poverty could be tackled, but also environmental problems," says Gopalakrishnan. "More so, we needed the system to work under a time frame for result assessment, with the active participation of the people."

"In the last 50 years, you just check out, all programmes and schemes meant for people have not included them. When the end-users are not involved, the system simply doesn't work," he says.


When Gopalakrishnan returned to India, his study was accepted by Digvijay Singh as the rgm. Later the mission was expanded to cover other sectors like primary education and rural industrialisation.

It is for the first time that all watershed activities under various departments have been pulled into one body in a major effort to convert community demand into community action. This also meant the creation of several organisations at the grassroots level to implement the scheme. All this meant:
• Creating infrastructure for coordination at the block and district level to facilitate planning and implementation at the community level;

• Involving the rural folk as the key players in the process of planning, monitoring, management and maintenance;

• Helping the locals in decision making by giving them adequate back-up of skilled personnel to assess the technical soundness of their decisions;

• Developing an integrated approach to land and water conservation, where the two are perceived as one unit; and

Power flows through the hands of the people into the rgmwd administrative set-up. The monitoring is done at the highest level but bureaucratic meddling is out. Even the political machinery has been short-circuited. In truth, the chief minister is directly linked to the project as the mission-level apex body, the Empowerment Committee is chaired by the state chief secretary who reports directly to the chief minister. Policy matters are aired and thrashed out at this level in the presence of the secretaries of rural development, forests, Panchayat Raj and other members.

These decisions are passed on to the state-level mission office which looks after the administrative jobs. The office is headed by a mission director who is assisted by an advisor and other subordinates. The mission director reports to the rgm coordinator. The office works as the fountainhead for the activities of the other agencies involved in the watershed activities.

The planning implementation agencies form a watershed committee for every micro-watershed of 500 to 1,000 ha. Elected by the gram panchayat, this panel comprises eight to 10 members, one-third of whom are women and another third are from the gram panchayat. In some cases the panchayat sarpanch (village leader) is the head of the panel. In Jhabua, this trend of giving more representation to the panchayat members is more visible.

The watershed committee decides which trees are to be planted. It imparts information on where and how to build check dams, ponds and other structures. Decisions relating to all gulley plugs, contour bunds and boulder checks are shouldered by local initiative. The committee's kitty is replenished from time to time by the planning implementation agencies and the role of the bureaucrat is reduced to giving guidelines on how to spend the money.

Around 10 per cent of the money given to the panel goes into a fund for maintenance. Also, whatever the panel receives as donations and saves on labour through the help of unpaid volunteers is added to a development fund. Here villagers get a chance to function like bureaucrats, using this money for various welfare schemes in the village.

Other community structures which existed before the coming of the project are known as user groups and self help groups. The latter consists of a body of landowners who will directly benefit from watershed management from the user group, which undertakes activities in both government and private lands. Those who don't own land form part of the self help group, a group which generally stands to benefit from the income-generating employment activities in the watershed. There are 25,500 such groups now in the state.

The role of women in the management of land, water, fodder and households is of prime importance. Therefore women's thrift and credit groups have been formed. Social banking of a kind is coming of age in mp. The state has 5,000 such groups where each member contributes Re 1 or more to the bank every day. Each group elects a secretary and the money is kept in her name to be disbursed to members as and when they require loans.