Crowd at the gate

Everyone wants a piece of the pie in the sky

Crowd at the gate 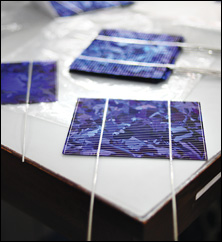 The three-phase Jawaharlal Nehru National Solar Mission has set up an ambitious roadmap: 22,000 MW of solar power by 2022.

The clock is ticking fast for the first phase. By 2012-13, grid-connected plants supplying 1,000 MW, rooftop and small plants producing 100 MW and off-grid applications generating 200 MW have to be up and running. The mission requires drastically ramping up solar energy production in India from the current 8-12 MW of installed capacity (see: Top four solar plants). But technology, cost and operational challenges are not easy to overcome.

The solar mission has evolved an innovative mechanism to fund this expensive power. The government directed the National Thermal Power Corporation’s (ntpc) trading subsidiary, the National Vidyut Vyapar Nigam (nvvn), to bundle the expensive solar power with the cheaper unallocated quota of thermal power. So with one unit of solar at a higher tariff (roughly Rs 18) bundled with four units of cheaper conventional energy (Rs 2 per unit), the power utility pays about Rs 5 per unit.


The programme is stuck because of its success. Too many people have applied for setting up solar projects. The Ministry of New and Renewable Energy says it faces two challenges. One, to provide a level-playing field for the newer sola-thermal projects to compete with the more established photovoltaic technology. After much deliberation it agreed on dividing power targets equally between the two technologies. Two, it wants to avoid too many projects queuing up before financial institutions. The ministry has proposed selecting projects in three steps. In the first step it will ‘migrate’ a portfolio of existing projects to this scheme. In the next step it will target only 150 MW by 2010-11.

The ministry says migrating the existing solar projects will quicken the pace. Officials, who did not want to be named, told Down To Earth (dte) they received proposals for over 700 MW for migration, and have narrowed down the list to eight to 10 projects, adding up to 100 MW. The final list would be out by June-end. But the rush by solar developers has led to delays. Although government sources insist migration is on schedule and they are only awaiting legal opinion on the process, the industry says projects and states that have been left out are disputing the migration list.

While officials are tightlipped about the selected projects, sources told dte that projects in Rajasthan add up to 66 MW and the rest are projects sanctioned under the ministry’s 50-MW generation-based incentive scheme introduced in 2007.

The government is swamped by applications and says it has little to allocate. It is now considering reverse auction, where project proponents shortlisted based on their net worth will be asked to state the cheapest rate at which they can supply solar energy. Proponents fear this approach could see big players underbid, which would lead to unfeasible projects. One developer told dte that solar giant Moser Baer has quoted Rs 8 per unit in Punjab against the published tariff of Rs 17.90.


The Gujarat government has moved fast to sign solar deals. As of January 2009, it had signed 34 agreements for solar projects. Fewer fructified. As of May 2010, it had signed power purchase agreements with 15 photovoltaic projects and two solar-thermal companies totalling 195 MW. The state has set its own tariff for solar photovoltaic: Rs 13 per unit for the first 12 years and Rs 3 per unit for the last 13 years. This includes accelerated depreciation adding Rs 2 per unit to the tariff. The state is aggressively earmarking land for solar projects leading to a mad rush of developers for a place under the Gujarat sun. It is also assuring projects, especially solar-thermal, access to the Narmada water. Surendranagar, Kachchh and Patan districts are the most favoured. On September 2009, the state signed an agreement with the US-based Clinton Foundation for a 3,000-MW solar park.