As Madhya Pradesh's ambitious plan to transport Narmada water to the Malwa plateau takes shape, it demonstrates the futility of river-interlinking projects 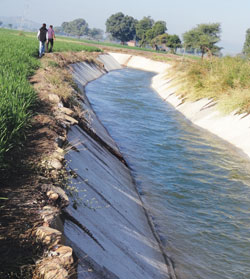 We have no water problems anymore. Now, Kshipra ji has sufficient water for everyone,” announces a smiling Manish Dangi, resident of Mudla village in the water-deficit Malwa plateau of Madhya Pradesh. He is standing on the bank of a concrete canal filled with swift-flowing water. It takes a while to fathom that the 3 metre-wide canal from the Narmada river feeds the fast drying Kshipra river, and is its new origin.

Just 50 kilometres away, residents of Aatwan village located in the Nimar plains of the Narmada river, are facing severe water crisis. The village is located in the command area of the Sislia reservoir but does not receive a drop from it. “Every day, the reservoir fills up and then, the water disappears,” says Deoram Narvare of Aatwan, staring ruefully into the nearly empty reservoir.

This reversal in water situation of the two places is the result of the Madhya Pradesh government’s ambitious Narmada-Malwa river-link project, the first river-linking project of the country. Under the project, the government plans to transport Narmada water to the arid Malwa region. This will be done by linking five rivers of the Malwa region—the Kshipra, Gambhir, Parvati, Kali Sindh and Khan—to various dams on the Narmada through canals and pipelines.

The government claims that together, these links would provide drinking water to 3,000 villages and 70 cities and irrigate about 680,000 hectares (ha) in the arid Malwa.

However, a close examination of the first phase of the project, linking the Narmada with the Kshipra, shows the Rs 26,000 crore Narmada-Malwa link project is not only expensive, but environmentally disastrous. It was completed in February. While there is no evidence to show that the project would alleviate Malwa’s water crisis, it is already depriving people along the Narmada of water. Besides, the project is highly impractical as it requires transporting river water against gravity. This is the reason National Water Development Agency dropped the project from its proposed National River Link- ing Project, which in itself is controversial.

The main problem involved in transporting water against gravity is that it requires an impractical amount of power. For instance, the Rs 432-crore Narmada-Kshipra link requires water to be transported from Sislia reservoir in the plains of the Narmada to Mudla, located at a height of 400 metres. For this, the project employs a 1.82 metre-wide, 48 km-long pipeline. As per initial estimates of Narmada Valley Development Authority (NVDA), which is implementing the river-link project, at least 27.5 MW of electricity is required to lift 430 million litres per day (MLD) of water. This will cost Rs 119 crore annually—over one-fourth of the cost of the project’s construction. The daily cost of pumping would be Rs 32 lakh, which translates into Rs 9 per kilolitre. Rajnish Vaish, principal secretary of NVDA, told Down To Earth (DTE) that water for domestic use will be provided to municipalities at Rs 15-Rs 17 per kilolitre. It is on a par with the tariff paid by nearby Indore city.

Estimates by Barwani-based non-profit Manthan Adhyayan Kendra, however, show that if other operation and maintenance costs and losses in transit are considered, the water tariff could go up to Rs 50 per kilolitre—5-10 times the price that urban consumers elsewhere in India pay. Whether people can afford this water is not yet clear.

Similar misgivings have been expressed regarding accessibility of water for irrigation. Vaish says water for irrigation would be provided at Rs 10,000 per ha annually, but only for micro-irrigation. A pre-paid water metering system will ensure that farmers do not waste water, he says. Activists working with farmers, however, are not convinced. “Pre-paid metering is the most effective ruse for denying water to the poor. Such schemes have failed in Africa and Bangladesh because people could not pay,” says Chinmay Mishra of features agency Sarvodaya Press, who has been writing on Narmada-related issues. Mishra and several other activists fear that NVDA may divert water from the project to industries and urban areas, mainly those along the proposed Delhi-Mumbai Industrial Corridor.

Their contention is justified. While NVDA is yet to supply drinking water to beneficiary villages, it has already diverted 90 MLD of water from the Narmada-Kshipra link to Pithampur industrial estate in Dhar district. This was not part of the original plan. Project in-charge M S Ajnare told DTE that NVDA is not supplying water to beneficiary villages as the infrastructure is not ready. He could not provide a time limit by when the villages would get water.

Meanwhile, desperate farmers have started lifting water from the Kshipra for irrigation. “All along its 200 km route, the Kshipra is riddled with underground pipelines laid by water-starved farmers who routinely lift water from check-dams,” says Shashikant Awasthi of Kshipra Punarpravah Abhiyan, working to restore flow of the river. Dangi says Mudla got water only after farmers forced NVDA to provide for irrigation.

The Narmada-Kshipra link has also led to conflicts in the region. Omkareshwar dam on the Narmada was originally meant to benefit farmers in the Nimar plains. But now its water has been diverted to Malwa plateau via Sislia reservoir (see ‘Defying gravity’). Early this year, farmers from Nimar filed a petition with the Indore Bench of Madhya Pradesh High Court, demanding a stay on inauguration of the link. In its verdict, the court faulted NVDA for changing the dam’s command area to include Malwa. “This could mark the beginning of an inter-regional water conflict in the state,” says Rehmat bhai of ManthanAdhyayan Kendra. Linking the Narmada with the Gambhir needs diverting water from Maheshwar dam, while the Kali Sindh and Parvati links will tap Indira Sagar dam.

NVDA has two explanations for undertaking the Narmada-Malwa river-link project. First, there is no other way to revive the arid Malwa. Second, it is the only way NVDA can use up its share of 18.25 million acre feet (22.5 million cubic metres) of Narmada water by 2025, as awarded by the Narmada Water Disputes Tribunal (NWDT). After 2025, NWDT will redistribute the unused water among the other Narmada basin states.

Rehmat bhai says, “The project is being pushed at the cost of Nimar plains, which receives lower annual rainfall than Malwa. The share of water allotted could be utilised by fulfilling Nimar’s needs.” Chief Minister Shivraj Singh Chouhan has stated several times that 700,000 micro-water retaining structures have been constructed all over the state during his tenure. DTE’S reportage shows such structures have improved conditions of water-starved Dewas district (see ‘Penny Foolish, Pond Wise’, January 16-31, 2012). Activists say the government can promote similar structures to revive Malwa.