The Melamchi project promised to end Kathmandu’s acute water shortage. But 15 years later, it is nowhere near completion

Fifteen years ago, Rajani Maharjan’s father had installed a pipeline in their house. It was supposed to end their water woes, just like the rest of Kathmandu valley’s.

Rajani, who works in Smart Pani that promotes rainwater harvesting, says Kathmandu was promised water from the pristine Melamchi River through a 26.5-km tunnel. But the Nepal government’s Melamchi Water Supply Project (MWSP) remains a distant dream. After repeatedly missing deadlines, the project is nowhere near completion. In a good week, people in the valley get water for a few hours, for a few days.

Kathmandu, Nepal’s largest urban economy, has for long faced water shortage. The Kathmandu Upatyaka Khanepani Limited (KUKL), a public company responsible for water and sanitation, manages to meet less than 50 per cent of the 400 million litre per day (MLD) demand. 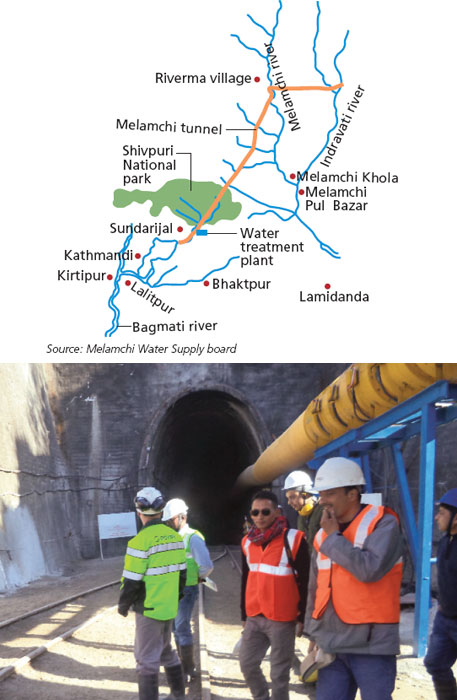 The pipe water supply system covers around 70 per cent of the urban households. The rest of the population relies on local wells, stone spouts and water tankers to meet its needs.

City resident Anil Sthapit says his family of 10 members receives an hour’s supply of water from the municipal line — once in 10 days. They have to depend on tankers and a well for water needs. But the well water, being rich in iron and ammonia, cannot be used for dri - nking, so the family buys a 12,000-litre tanker every 15-20 days that lightens their pockets by 2,600 Nepalese rupees.

Sachin Sreshtha of Baneshwar has a similar story. For more than 15 years now, he has been getting piped water for two hours every four days.

To make matters worse, the urban population of Kathmandu is growing rapidly. According to the 2011 census, the valley was accommodating 2.5 million people compared to 1.6 million in 2001.

But water was not always such a big problem. The valley had a management system that prohibited the expansion of the city beyond a ring of shrines/temples. With an increase in population, however, green areas were soon swallowed up.

In the absence of a proper sewerage system, the remaining groundwater started getting contaminated with sewage as well as industrial effluents because almost 40 per cent of industries in Nepal are located in the valley and only 15 per cent of households have sewage facility.

According to the Groundwater Resource Development Board, groundwater level in the valley is declining at an average rate of 2.5 metres annually.

Melamchi Water Supply Project
Kathmandu had started looking for alternative water sources some three decades ago. In 1998, the Melamchi River was finally identified for providing additional water to the valley. The 41-km river is located northeast of the valley. It springs from the Junal Himal mountains and joins the Indravati River near the town of Melamchi Pul Bazar.

MWSP was expected to address the socio-economic distress caused by the lack of water as well as provide wastewater management services on a sustainable basis. “There are many rivers but all are polluted. The Melamchi was chosen as it is snow-fed and, therefore, contains more water, especially during summers when demand is high. The upstream and catchment areas of the river are natural reserves so the quality of water is also pristine,” points out Krishna Prasad Acharya, executive director, MWSP.

The project aimed at transferring 170 MLD of water from the river to Kathmandu via a tunnel. It was meant for rural-urban and intra-basin water transfer and included construction of a water treatment plant and a bulk distribution system.

The total cost of the project was estimated at US $317 million. The Asian Development Bank (ADB) and the Government of Nepal agreed to contribute $137 million and $90.6 million respectively and the rest was to be shared by other donor agencies.

Fifteen years have passed since the project was conceived, but actual work did not begin until 2010.

ADB, in the meantime, decided to fund the project on the condition that the government hand over the management of Nepal Water Supply Cor poration—an autonomous organisation to Severn Trent Water International, UK-based private water company. But privatisation was not acceptable to the people. After stiff opposition, Severn Trent withdrew and ADB continued its support. But this led to delays.

The project eventually took off in 2010 with the deadline of 2013. This time, the contractor, a Chinese company, failed to finish it in time and its contract was cancelled. The new deadline is 2016. Ghanashyam Bhattarai, deputy executive director of the Melamchi water board, admits that problems like political unrest and parts of the tunnel collapsing have also resulted in delays. So far, only 6.5 km of the 26.5-km tunnel has been excavated. 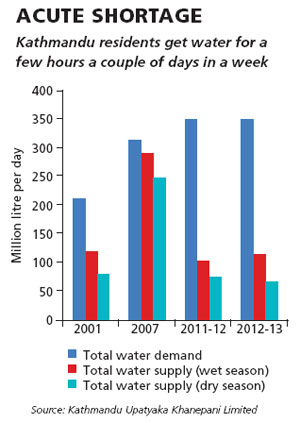 More harm than good
Kathmandu, in the hope of river water, has taken no measures to strengthen its water delivery system in other ways. “While the project will improve the water scenario, it will not solve the water problem permanently,” says Krishna Prasad Acharya.

Ajaya Dixit, executive director of the Institute for Social and Environmental Transition, Nepal, notes: “Since the project was conceived, no steps have been taken to harvest rain water or conserve it in other ways.”

Prakash Amatya, former executive director of the non-profit Forum for Urban Water and Sanitation in Kathmandu, too, raised the alarm.

“Urban Kathmandu is growing at a phenomenal rate. At best, the Melamchi can be just one source to quench the thirst of the residents,” he says.

Some of the main water pipes in urban Kathmandu are 120 years old.

“The leakage rate is almost 35 per cent; some studies claim it is higher,” says Bijaya Man Shrestha, a KUKL manager. “The mindset of the city agencies is, ‘Let Melamchi come first, then we will act’,” says Shakya Suren, a leader of Lalitpur Citizen Committee, a forum of consumers who have not had a drop of water from the municipal water supply line for more than a decade.

Fifteen years ago, the Melamchi water was the ultimate dream for the residents of Kathmandu. Today, they only talk about Melamchi with a sigh.