Employment guarantee scheme not in sync with Mastapur's needs

Employment guarantee scheme not in sync with Mastapur's needs 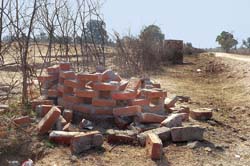 Hope floated in drought-hit Mastapur village when people heard of the National Rural Employment Guarantee Act (nrega) in 2006. Residents of this village in Madhya Pradesh's Tikamgarh district thought of the scheme as the perfect opportunity to renovate their local tank to tide over a four-year long drought. For, under nrega, water conservation gets top priority and the village panchayat has the power to decide for it. But hopes disappeared soon instead, the village got a kachcha road (mud track), which is hardly commutable.

For Janaki Devi, a Mastapur resident who trudges 2 km everyday for a pot of water, it's bad news. She says, "No one wants to marry their daughters in a village where one has to walk barefoot long distances to fetch water." In her village women are not allowed to wear shoes while venturing out.


Mastapur's story repeats throughout Tikamgarh. In Ganeshgunj village, sarpanch Prakash Chandra Aharwar says that nrega is out-of-sync with local needs. In his panchayat, lots of plantation works have been undertaken under the scheme. But there is hardly any water to keep the plants alive. "We are watering the plants at our own cost. But all water sources have dried up," he says.

Juxtapose this with nrega's implementation statistics only 3.64 per cent of total works under the scheme have been on water conservation. Worse still, drought-proofing works under the scheme have got the least priority. However, more money has been spent on water conservation despite less number of works. The district has spent around Rs 27 crore or 36 per cent of its total available funds on water conservation. One of the lowest expenditure was on drought proofing, just Rs 12.48 lakh.
The roots of the problem lie in the Madhya Pradesh government's delay in implementing nrega. It implemented the scheme in July-August 2006, five months after it came into force. That was also after the union government questioned non-utilisation of funds. But these months being sowing period, there was little demand for works. "The focus has to be on water conservation. I am trying to make that happen, but due to the drought, the impact of our efforts is not visible," says Manoj Mishra, additional Janapad officer of Tikamgarh.

This contention notwithstanding, to answer the union government, the district authorities pushed panchayat s to take up large-scale concrete road construction. Concrete roads require less labour and can be made during rains. The panchayat bodies, also in hurry to spend the funds, encouraged roadside plantation and jatropha plantation.

At least 50 per cent of the works under nrega have to be undertaken by panchayats. But, says a senior district official, "five per cent of nrega funds have been given to the panchayats. They are too small to carry out such works".A worker of the local ngo, Srijan, adds "Most nrega works are approved by the government. Panchayats only implement." The ngo has been campaigning for more watershed works in nrega.