What made them slip? 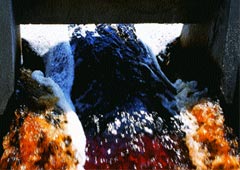 GRP has a time series data of 8 years for the Indian pulp and paper sector. It is a powerful indicator of visible changes, not just in companies which have improved but also in those that have slipped. The database also allows GRP to tellingly forecast what the management has to do to improve in the years to come, and why

#11 (2 last time) The Andhra Pradesh Paper Mills Limited (APPML)
In the 1999 rating, APPML scored high because of its efforts to source raw material from farm forestry schemes, and for above average performance in using resources like chemicals and lime. The mill had a lime kiln and its effluent treatment plant was also better than the average in the sector. However as GRP pointed out then, the mill's water consumption was extremely high; it was consuming more than 200 tonnes for every tonne of paper manufactured. The energy consumption of the mill was also much higher than the sector's average

What happened this time?

Sourcing wood from farmers: The mill has continued to do well here -- consistently meeting more than 80 per cent of its requirements from farmlands. Even so, with other mills taking huge strides in securing sustainable wood sources, it has lost out. It score has slipped from 47.5 per cent to 42.4 per cent.

Process and technology: It has lost big time by not investing in its process, not improving efficiencies. The technology has largely remained the same. The mill's cooking process remains outdated. It does not have an oxygen delignification system. The bleaching sequence has not changed significantly. The only investment made by the mill has been the installation of an NCG (non-condensable gas) incineration system to reduce odour, due to pressure from the local community -- jail inmates -- whose protests reached court.

The most serious issue, however, is its water consumption: at 200 tonnes for every tonne of paper, it is extremely high. The mill consumes more than five times the best possible practice.

What is more worrying is that the mill has not reduced its water consumption significantly since the previous rating. While most mills in the industry are looking for ways to reduce their water consumption, and even finding solutions, APPML continues to be a voracious consumer of water. All in all, the mill has lost because it has not improved its performance, while the sector as a whole has.

#13 (3 last time) Ballarpur Industries Limited (BILT)-Ballarpur Unit
The Ballarpur unit is the flagship mill of the Ballarpur group -- the largest paper manufacturer in the country. But the unit has fared very poorly -- from scoring a modest 33.4 per cent in the last rating to a low 28.6 per cent this time

This old and treasured mill was set up as early as 1953 on the banks of the river Wardha in the forested Chandrapur district of Maharashtra. Like the other big loser, the Andhra Pradesh Paper Mills, BILT-Ballarpur Unit is bogged down by the lack of technological growth, in a sector fast improving on its score. It remains highly inefficient and this shows up in its material balance.

High and dirty water: The mill depends on an already stressed river, the Wardha, for its water - and the effect of the mill's operations on the river, and on local communities dependent on the river water, is tremendous.