Despite having the potential to give a green edge to the agricultural market, biopesticides are yet to make a mark in the agro sector. To create a market for biopesticides, there has to be a paradigm shift in the way business is done. It must develop a relationship with the farmer and create a dynamic process of a two-way knowledge transfer from lab to land 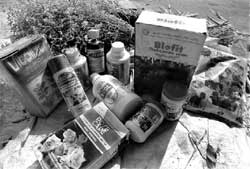 KISHAN PAL collects wasps for a living. He feeds them beefliver and chicken to ensure they retain their sting. Farmers make a beeline at Pal's house to buy these tiny cannibals. They are more than willing to pay Rs 500 for each carton of wasps. When let loose on fieldsthese creatures immediately identify their enemies: pink bollworms and stem borers. It takes them no time to devour the eggs of these pests.

Pal's buyers are farmers who have said no to chemical pesticides. These farmers are a part of the biopesticide worldwhich uses anything - from animals and plants to bacteria and minerals - for cost-effective pest management. The existence of this world is as old as agriculture itself. For centuriesfarmers across India have been using traditional knowledge about biopesticides to good effect. Buttodaythese ecofriendlyproducts have come out of the realm of farmers' legacy of traditional knowledge. They have become a unique selling proposition that holds the promise of a green future.

At presenta range of biopesticide products are available. Howeverthey are yet to become market favourites. Till datetheir growth has been slow and timid. This is despite biopesticides being an integral component of the much vaunted integrated pest management programme (IPM). The concept of IPMintroduced in 1969encourages sustainable agricultural practices by encouraging the use of biopesticides. Howeverthe advocates of IPM promoted just a few sources of these ecofriendly products. As a resultthe biopesticide sector remains limited to a few 'niche' productsleaving the dream to tap all sources of biopesticides unrealised.


These ecofriendly pest enemies are derived from three sources: microbialbotanical and biochemical. Microbial pesticides are made of microorganisms such as bacteriafungusvirus or protozoa. These can fight pests and through various ways: by producing toxins specific to pests and causing diseases in them. The second type of biopesticides are plant-based. Biochemical pesticidesthe third categoryare substances that control pests by non-toxic mechanisms. They contain several chemicals that affect the reproductive and digestive process of a number of important pests. Biochemical pesticides include substances such as insect pheromoneswhich are chemicals that insects produce for communicating with each other. Fruit growers often use pheromones to combat the menace of codling moths. Special devices release female codling moth pheromone into the air. The extra pheromone confuses the male moth and prevents it from finding a mate.
The most commonly used biopesticide sources are Bacillus thuringiensis (Bt)Baculovirusesneem (Azadirachta indica)trichoderma and trichogramma. Among theseBt is the most popular. It can cause diseases in pests that affect rice and cotton. When ingested by pest larvaeBt releases toxins that damage the mid gut of the pest. This eventually proves to be fatal for the crop enemy. Bt-based products are widely being used across the world as their efficacy is highest among all the biopesticides available in the market today. Moreoverthey have the potential to ward off the largest number of pests. Global sales of biopesticides was US $160 million sales in 2000 - 90 per cent of which came from Bt-based products. In IndiaBt-based pesticides form a major component of the biopesticide marketthough it is marketed by only a few companies. In 1999its sales were reported to have touched 70 tonnes.

Worldwidethe second-most commonly used source of biopesticides is baculovirus. These viruses act as pathogens and cause fatal diseases in pests. Being target specificthey can combat certain pests effectively. But they are not commercially available in India - they are produced by only a few state agriculture departments and some IPM laboratories.

The other well-known sources of biopesticides are trichoderma and trichogramma. Trichoderma is a fungicidewhich is effective against soil-borne diseases such as root rot. It is particularly relevant for dryland crops such as groundnutblackgramgreengram and chickpea. It is commonly available in Indian markets.

Trichogramma are minute wasps that act as egg parasites. They lay their eggs in the eggs of various pests. After hatchingtrichogramma larvae feed on the eggs of the host and in the process destroy them. Trichogramma is considered very effective mainly because it kills the pest in the egg stageensuring that the pest is destroyed before any damage is done to the crop. They are useful for controlling pests of sugarcanecottonricevegetables and fruits. A number of countries are producing trichogramma biopesticides on a large-scale. Howeverlike baculovirussuch biopesticides are being produced only in a small way in India - mostly by cooperativesstate agricultural departmentsIPM centres and agricultural universities.

Among plantsneem is most commonly used for manufacturing biopesticides. Though more than 100 firms are registered in Indiaonly a few are producing - mostly for the exportmarket. Besides neemmore than 20other plant species containing toxic characteristics have been identified in the past 50 years. These toxic ingredients can be either used directly against the insects as a crude extract or can be purified and formulated as biopesticides. Other than these toxic characteristicsplants also have a number of secondary metabolites that can cause adverse behavioural and physiological effect on insects.