That is what the Montreal Protocol, meant to do away with ozone depleting substances, has become. India's phase out programme under the protocol is only helping the big businesses in the country earn some quick bucks. About US $75 million of public money has been spent 'compensating' them. Where and how they are spending the money is anyone's guess. Is the money only aiding the industry's shift from one set of dangerous chemicals - chloroflourocarbons - to another - hydrochlorofluorocarbons? Is the industry and the government playing into the hands of North-based mulitnationals? The fate of thousands of small-scale units involved in the trade depends on finding answers to these questions. NEELAM SINGH reports on how India is gearing up to meet the imminent phase out deadline 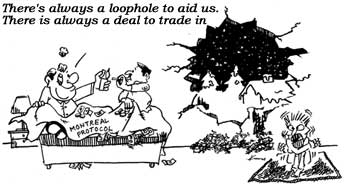 India is obliged under the Montreal Protocol to gradually stop the use of ozone-depleting substances (ODS) such as chlorofluorocarbons (CFCs), which cause unimaginable damage by burning a hole in the Earth's stratospheric ozone layer. The industrialised countries have already phased out some of these substances. The first deadline for India and other developing nations comes on January 1, 2010, when these countries are expected to entirely stop using CFCs.

Along with a handful of other countries, India is in a somewhat unique situation - it not only uses ODS to manufacture products, but also produces most of them. It is the second largest producer of CFCs after China. CFCs are commonly used as coolants in refrigerators and air conditioning systems. They are also used as aerosols and to manufacture foam. Other ODS like hydrochlorofluorocarbons (HCFCs) and carbon tetrachloride (CTC) also find extensive use in commercial as well as domestic applications. Deodorants, sprays, perfumes, solvents, fire extinguishers and fumigants, all use ODS.

A multilateral fund under the protocol finances the transition. Or rather, it is supposed to. In India the 'ozone cell' set up under the Union ministry of environment and forests (MEF) acts as the nodal agency to manage all protocol related activities. It plans out phase out dates and directs industry's moves. India's country programme to fund the transition was prepared way back in 1993.

Millions of dollars have reached Indian shores to finance the transition under the programme. Millions more are promised. Are these only a part of the larger pie that the organised big businesses gobble up to sit pretty while the crux of the problem remains un-addressed? No- one in the industry or the government is looking at the best possible option - hydrocarbons - for alternatives. What holds the industry back from making a real change, short sightedness or lure of the lucre?

INDIA'S case is unique. Its one of the few developing nations that consumes as well produces ozone depleting susbtances (ODS). In fact, after China, it is the largest producer of chlorofluorocarbons (CFCs). It produces most other ODS also. The protocol therefore hits India's economy twice over. Once, when the companies making ODS-based products are forced to phase them out. And the second time when the multi-billion dollar ODS-manufacutring units have to stop producing these substances.

The four biggest manufacturers of CFCs in India are SRF Limited, Gujarat Fluorochemicals Ltd, Chemplast Sanmar Ltd and Navin Fluorine Industries. Along with some smaller companies they produce about 20,000 metric tonnes (MT) of CFC-11 and CFC-12, which are used primarily by the refrigerant and air conditioning sector (RAC). Out of this, about 6,700 MT is sold in the domestic market. The rest is exported to other developing countries. About 100 MT of halons - another group of ODS used mainly in fire extinguishers - are also produced in the country. About 18,000-19,000 MT of carbon tetrachloride (CTC), an ODS used as a solvent, is produced by SRF Limited, Chemplast Sanmar Ltd and Gujarat Alkalies and Chemicals Limited. Tata Chemicals Limited produces about 100 MT of methyl bromide - an ODS at the centre of a raging controversy and used as fumigant. All these substances have to be phased out in a fixed time frame (see table: On their way out).