Tribals displaced by the Salandi river dam in Orissa are encroaching on the Hadgarh sanctuary, allegedly at the instigation of the Socialist Unity Centre of India and with the help of forest department employees. 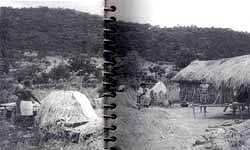 IN THEIR quest for cultivable land, tribals have cleared more than 2,025 ha of virgin forest in the Hadgarh sanctuary in Orissa's Keonjhar district in less than two years. According to the Antyodaya Chetana Kendra (ACK), a voluntary organisation that has been working in the area for nearly a decade, a political party -- the Socialist Unity Centre of India (SUCI) -- has played a major role in instigating the tribals to destroy the forest with the connivance of forest department employees.

At the root of the problem is improper rehabilitation of those displaced by the Salandi river dam. Between 1965 and 1972, nearly 550 families of six villages from Keonjhar and Mayurbhanj districts were moved from the reservoir area to seven resettlement colonies established in the hills and dense forests nearby.

Some of the villagers refused to move to the resettlement colonies because they found the land there unsuitable for cultivation. Besides, being forest dwellers, they did not want to settle outside the forest. As a result, when their villages were submerged in 1971, more than 350 such families rehabilitated themselves in six different parts of the forest, occupying more than 607.5 ha.

The biotic pressure on forest land has been on the increase since the Salandi dam came into existence. While the foodgrain output has remained low because of low fertility, the population has increased manifold over the last 20 years. And, mining and other development projects in the area have enhanced the pressure on the forest.

According to a survey done by the ACK and volunteers from Anandpur College, which is situated about 20 km from the dam site, the tribal villagers led a comfortable, if not prosperous, agriculture-based life before their displacement. On an average, each family possessed about 2.63 ha of fertile land irrigated by perennial sources of water.

Today, however, the scenario is entirely different. Young girls and boys felling trees and carrying logged wood, firewood and leaves home is a common sight. Most of the forest produce goes to timber merchants and smugglers from the nearby towns.

To protect the forest, the authorities initially tried to evict the tribals by lodging cases of illegal tree-felling, but most of the cases were dismissed for want of evidence. The tribals have been living in unauthorised settlements ever since. "They are the forest people, so they cannot be rehabilitated elsewhere. Moreover, they have lived there for more than 20 years and do not destroy the forest. It is the landholders from outside and those rehabilitated in resettlement colonies who are encroaching the forest and destroying it," argues Bishnu Padaraj Mohanty of the ACK.

The success of the self-rehabilitated people has encouraged the encroachers, who allege that many of them have not received the 1.34 ha they were promised. Besides, the meagre amount of land given to them is mainly rocky land unfit for cultivation. Keshab Khandai of the Sankatapalia resettlement colony considers himself lucky for having received the patta (lease) for his land, though he received it only a couple of years ago. "Many of us have got no land at all," he says.

Thirty-five of the 77 families resettled at the Sankatapalia colony have already left: Some have returned to their partly-submerged villages or moved to nearby towns and others have found hope in SUCI's campaign for forced possession of forest land.

The district administration alleges SUCI encouraged the encroachers, most of whom are from the resettlement colonies. And, though Keonjhar collector Jagadananda Panda says "they'll all be simply evicted", no action has been taken despite strong appeals by other settlers in the area and the ACK.


SUCI is alleged to have extorted money from the tribals by assuring the villagers they will get pattas and will not be prosecuted for cutting forests. The tribals claim the party collected Rs 500 to Rs 1,000 from each family, which they shared with the forest department employees.

Cases of encroachment and illegal tree-felling are regularly lodged against the encroachers and many have several cases pending against them. However, no one is worried as hardly anybody has been punished till date, thanks to the collusion with the forest department employees. A resident of Jhunaposi -- one of the illegal settlements that have come up within the reserve -- claims the foresters regularly extort money and material to ensure the charges are not proved.

SUCI's Balaram Sahoo dismisses the allegations of encroachment and extortion as political propaganda. "We are demanding that the displaced persons who have not been rehabilitated be allowed to live inside the forest and be given a record of their land rights," he says. He refuses to acknowledge the large-scale encroachment and claims, "It's very, very rare." About the promises of pattas, Sahoo explains the tribals mistake SUCI's support for a promise to get them pattas. "Their idea is that as long as SUCI is with them, the government cannot deny them pattas," he explains.

The issue of the villagers' livelihood was also a factor in pushing them towards the SUCI-forest employee nexus. Many tribals illegally cleared patches of the rich sal forest for cultivation. Besides, they added to their income by selling firewood they collected from the forest. People from the neighbouring villages and small towns also came to reap the benefits. Situm Purti, a villager from Sankatapalia, argues, "We have encroached upon this land for the sake of our stomachs. We are poor people. What else can we do? If we are allowed to go back to our original land, we won't encroach on any other land."

Vested interests other than SUCI are also taking advantage of the tribals' impoverishment and their dependence on the forest. They are underpaid by the timber smugglers and merchants, who go to the extent of adopting arm-twisting tactics to keep them under their control. When some ACK activists joined some of the rehabilitated villagers in enforcing a ban on tree-felling and temporarily stopping timber supply, some influential businesspersons retaliated by blocking the supply of essential goods to remote villages. "How can we protect the forests in the face of such retaliation, if the administration does not come to the rescue of pro-environment groups?" asks an ACK activist.

Panda admits negligence on the part of the administration is responsible for the sorry plight of the displaced persons and agrees with Mohanty that the tribals' dependence on forest resources cannot be ignored. However, he says, they cannot be allowed to stay inside the reserve forest, whether they are self-rehabilitated or encroachers. "We'll have to strike a balance. They can stay near the forest, but not inside it," he argues. Keonjhar divisional forest officer Sarat Chandra Patra concurs.


Some of the forest officials are, however, more sympathetic. One senior official suggests the best solution to the problem could be the dereservation of the forest. Alternatively, he suggests, a buffer zone could be created for the displaced persons. Panda says the oustees will be rehabilitated properly. "We are going to give them government land and houses. And this time I'll try to get their consent."

SUCI, nevertheless, asserts it will not allow eviction. "Whether tribals or non-tribals, those who are settled there can't be evicted," declares Sahoo.