From bonded labourers to green crusaders

From bonded labourers to green crusaders 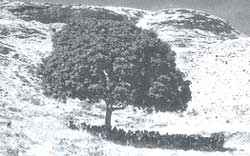 "I WAS A labourer, but now, because of the project, I am free. I cannot explain what this means to me," says Dadabhau Jadhav, a frail, small-built Thakkar Adivasi of Mothewadi village in the foothills of Maharashtra's Sahyadri range. For generations, the Thakkar Adivasis have worked as contract and even as bonded labourers. Till two years ago, the impoverished and landless Thakkars of Mothewadi were not very different from other Thakkars, a large group of tribals living in the hill belt of Pune, Ahmednagar and Nashik districts.

The project Jadhav talks about is an environment regeneration programme launched by the Mothewadi villagers. The villagers of Mothewadi, a small hamlet of about 3,000 inhabitants in Ambegaon taluka of Pune district, began to reforest the hills around their village only just a little more than a year ago, but the project already shows what can be achieved in terms of natural resource regeneration if people unite.

Behind the success of the Thakkars' work is the Parivartan Prabodhini, a trust formed by 11 young Thakkars and spearheaded by Baba Pansare, a social activist. The trust was instrumental in uniting and spreading awareness in 65 Adivasi villages. Its major achievements include the sanctioning of 10,000 ration cards to the Adivasis, securing legal status for their villages, inspiring voluntary alcohol abstention, starting schools and getting just wages for tribal farm labourers. Prabodhini helps the villagers in getting government aid and gives them technical advice, but all the work is done voluntarily by the people.

Prabodhini's first success was stopping the exploitation of the villagers by tomato farmers. The central and eastern belts of Ambegaon taluka are famous for their tomatoes, which are grown on more than 5,000 ha. The tomato boom brought about general prosperity to the farmers of the region, but not to the Adivasis who worked for them.

Pansare explains, "Most of the tribals who worked as labourers on the tomato farms were exploited. Every year, the Adivasis were hired to keep a watch on the fields and were required to camp on the fields with their families. But they ended up doing practically all the work on the farm -- from sowing to harvesting and loading crates on to trucks. For every monsoon season that a family stayed and worked on the field, it was promised about Rs 10,000. But the promised amounts were seldom paid and only small sums were doled out every week for subsistence needs."

Prabodhini took up the issue and insisted that Rs 10,000 per acre per family be paid in full at the start of the season. Faced with the threat of an imminent strike at peak season, the farmers complied with the demand. Says Pansare, "The major achievement was not securing the money, but making the Adivasis realise the strength of unity."

Following this victory, a meeting was convened by Prabodhini, at which the villagers unanimously decided to take up the afforestation of 120 ha of barren land owned by the forest department on the neighbouring hills. But getting control of the land from the forest department wasn't easy. Says Pansare, "We couldn't start the project despite several requests to the forest department because of red tapism. So, we took a morcha to Delhi. We must have been the first group to have taken a morcha to Delhi to ask for permission to plant trees!" The villagers finally got access to the barren hill land in April 1992, but on the condition they did not use it for agricultural purposes. The villagers were, however, allowed to plant any other species of their choice. Vasant Kedari, Mothewadi's sarpanch, says, "The forest department will own the land and we will own the trees."

The afforestation project had more at stake than just planting trees. Says Pansare, "We had a big range of hills and good rainfall, but the rainwater used to run off. We wanted to tap the water and recharge the wells downstream by greening the hill. This would also help the women to collect fodder and fuelwood."

Within 10 days of getting the forest department land, the villagers had dug more than 200,000 pits to aid water percolation and had planted seeds of 250 varieties of indigenous plants, including 50,000 bamboo seeds donated by the forest department. Social fencing was enforced and the area was closed to free grazing.

As a result of social fencing, the villagers were able to harvest about 35 truckloads of fodder in less than a year. A key factor that was responsible for the success of the project was the effective management of land. The area to be afforested was divided into nine sections, with a committee in charge of each section. About 20 families manage and protect each section under the supervision of one person chosen by the committee. The nine committees fall under the main committee, which consists of Pansare, Vilasrao Salunke, who is famous for his work on Pani Panchayats, some members of the village and Parivartan Prabodhini activists, whose role is essentially to motivate and advise.

Pansare says the division of responsibility in managing the project reduced the chances of the project failing. If the land was managed by the whole village, "no single person or group would be accountable. But now, because each group is in charge of a plot, they feel responsible for it." This is buttressed by the fact that the gains from each plot would accrue to the group looking after it.

For example, the grass cut from each section was divided equally among its constituent families. Says Dadabhau Jadhav, the leader of one group, "We got two trucks of fodder from our plot. I personally sold fodder worth Rs 800." Maruti Kedari from another plot did not sell his share of grass because he has three bullocks and a cow.

Thanks to the afforestation, drinking water was available in the village even in the height of the dry season. The pits helped in the percolation of water, raising the water level in the village wells. Says Dadabhai Pila Jadhav of Mothewadi, "Even at the end of May, we had about three metres of water in our well." In contrast, the nearby villages ran short of water and tankers had to supply water to them.

Earlier this year, the villagers began an intensive watershed development programme. They built embankments along nullahs and dug contour trenches to tap run-off water from the hill and recharge the groundwater.

But the successes of Mothewadi's villagers are not entirely trouble-free. Conflicts have broken out with the neighbouring villagers, especially with regard to the issue of free grazing on the hill.

Attempts by Mothewadi villagers to convince their neighbours not to let their animals graze on the hill haven't been very successful. Says Sitaram, "Repeated requests failed to dissuade a farmer from nearby Ramwadi from sending his cattle. We had a verbal altercation and a week later, I found my small tomato farm in ruins."

A complaint was lodged, but it was withdrawn after a panchayat meeting because the Thakkars did not want to prolong the tension. In March this year, the grass on more than 8 ha was set afire, but prompt intervention saved the rest of the hill.

Jayavantabai, a woman of Mothewadi, says, "All this is happening because the upper-caste people of the nearby villagers cannot tolerate the fact we no longer depend on them for survival." Says another woman Bhamabai Kedari, "Instead of depending on daily wages, we now sell the grass that grows on the hill. Last year we had one harvest and this year we will be able to harvest the grass twice."

Perhaps the main reason for the tension is the loss of income for the people of nearby villages. They used to lease the hill from the forest department for about Rs 250 annually and sell grass-cutting rights on the land for Rs 10,000. The afforestation project put an end to all that.

But the determination of the Mothewadi people to keep cattle out is gradually taking hold. And, with the abundance of fodder, the villagers are planning to start dairy development. Notwithstanding the tangible benefits of Prabodhini's work, Pansare says, "The main outcome is the people have been able to unite. We only demonstrated what can be achieved if people -- even if they are from the lowest rung of the economic ladder -- come together for a common cause."