From cradle to grave

From cradle to grave 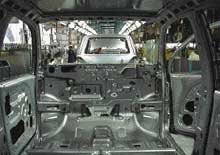 The Green Rating Project (grp) team knew from the beginning that a thorough rating process would require a set of parameters and methodology that would stand the test of time and the scrutiny of the industry as well as critics. There was no precedent to go by, therfore the team embarked on an unchartered course coming up with this pioneering process. It set about preparing an exhaustive rating guideline, keeping in mind that both the qualitative and quantitative aspects of a company's environmental performance had to be assessed. The team decided to construct parameters covering the entire life cycle of the industry.

One look at the comprehensive list of parameters drawn up shows how the blueprint for the automobile sector rating was based upon scrutinising all process in the sector -- planning at the board-room level, the supply chain and production floor. The analysis did not end there. The consequences for the environment of the consumer using the vehicle and the manner of final disposal too was brought to scale, keeping a constant vigil for the pro-active initiatives taken by the company all through. In all, the grp analysed the auto industry for more than 150 major parameters with numerous minor indicators.

Though the greatest environmental impact of the sector occurs when the vehicle is actually used, the other processes too have their own bearings on the environment. The project team therefore used a weighted parameter scheme, giving more weight to the crucial factors and less to the less relevant ones. The team assigned 56 per cent of the total weight to the parameters related to the environmental performance of the product and the rest 44 per cent of weight was distributed across the parameters in proportion to the environment impact caused during the other phases of the life cycle.

Primary studies conducted by the grp team showed that the automobile sector sources a large percentage of the parts and components required for manufacturing vehicles. Approximately 50 per cent of this outsourcing is done from small-scale manufacturers. It makes economic sense to do so. However, outsourcing takes a huge toll on environment, as small-scale companies have neither the means nor the intent to reduce pollution. The grp therefore assessed the procurement policy of the various automobile companies using the Pollution Transfer Index. The index is a factor of percentage of parts and components outsourced and the capability of the respective vendor to handle the pollution aspect of the process and the respective pollution intensity of the process. grp analysed whether the company in question gives emphasis to conducting business with environment conscious companies and whther it has the credentials to prove it.
At the production plant itself the grp team studied how efficiently energy and other resources had been utilised. Main sources of energy for the automobile sector constitute conventional fuels, such as diesel and cleaner fuels such as propane and compressed natural gas. Cleaner fuels, though, are much less in vogue. During production, processes like metal casting, press shop, heat treatment, fabrication, painiting and machining usually consume the greatest energy. grp assessed the measures undertaken to reduce energy consumption and mitigate pollution during the production processes. grp rated metal casting processes for the percentage of scrap used in comparison to virgin metals and on the trends in the consumption of scrap in the last three years.

The type of oil and lubricants used was studied during machining and fabrication processes. Large volumes of oils, lubricants and coolants, majority of which are non-biodegradable and toxic in nature, are used during the two processes. The initiatives taken by the companies towards the use of environment-friendly oils, lubricants and coolants was assessed. The project also examined the toxicity index of the metals used for electroplating, which includes heavy metals like chromium, lead and zinc. The paint shop was a special area of focus for the grp because painting is one of the most polluting processes in an automotive plant.

Besides peering at the chain of processes that lead to the manufacturing of a vehicle, grp also looked at the pollution load generated by the companies. It assessed the pollution in the discharged water, the emissions released in the air and solid waste generated and the efficiency of the waste treatment plants. These were compared against the regulatory standards set up by the government. Companies got additional points for taking the initiative and going beyond the compliance levels.


In a change from the run of the mill ratings, grp decided to take a look at, what many would call the meat of the issue -- the engine inside the vehicle. It broadly segmented the issues concerning the engine into three, vehicle and engine design, pollution control technology and actual emissions. Vehicle and engine design was given the highest weightages out of the three. The pollution control technology being used in the vehicles was given the second weightage while the actual emissions from the vehicle got the least weightage. The weights were assigned keeping in mind that engine design has a direct correlation with emissions and is most crucial, whereas the pollution control technology is functional, in India, only for the initial life of the vehicle and becomes irrelevant in the later period of the vehicles running life. The emission values in the test reports too are of comparatively little significance as they are more a mirage than reality for the consumer under real driving conditions.

Driving to the grave
The last stage in the life cycle of a vehicle, that of final disposal and recycling of parts of the vehicle, was also brought under the ambit of the rating process. While driving the car causes considerable impact on the environment, disposing or recycling of the aged vehicles poses its own threat. Therefore grp looked at what, metaphorically may be called, the graveyard of the vehicle. The following initiatives taken by companies for environmentally sound disposal or recycling of the product were considered: whether vehicle design incorporated ideas of recycling, the extent to which the vehicle could be recycled and the development of product recycling manual.

Besides what happens at the factory floor, on road and at disposal sites, the grp also took a close look at the going-on inside the boardrooms and how integral environmental initiatives are to company operations. grp was looking for leaders in the industry, who, besides driving their companies to profits also believe in riding the stagecoach of environmental consciousness.

Another way of assessing corporate endeavours towards environmental management was to see how the companies has tried to create an informed consumer. grp decided to assess and incorporate in its parameters a measure of how seriously the companies took consumer sensitisation.

This complete life cycle analysis ensured that the rating became a robust model.