Fifteen years ago, BALCO made an abortive attempt to mine bauxite in one of India's richest biodiversity reserves, Gandhamardan in Orissa. Now the threat comes from herb smuggling 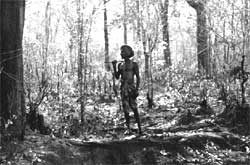 Memories are interactive. As the country debates over the selling of the public sector Bharat Aluminium Company ( balco ) to a private company, memories bring the Gandhamardan hills in western Orissa into national imagination. Fifteen years ago, the Gandhamardan hills, rich in biodiversity and bauxite equally, were the platform for one of India's most vocal people struggles to conserve forests and livelihood. A five-year sustained campaign by the local people saw balco wind up its operation to mine 213 million tonnes of bauxite. It was a major victory both for the local forest-dependent people and for the fragile ecology of western Orissa. Gandhamardan sustains more than a million people and is the source of two major tributaries of the river Mahanadi.

But the battle is far from over. The Gandhamardan ecosystem is still in peril. It faces its worst threat on many fronts. The current spell of drought, illegal felling for timber, overexploitation of forest resources and faulty method of harvesting medicinal plants has already taken a toll. However, local residents, who led the campaign against balco , still vow to fight for its protection.

Such is its richness in medicinal plants that more than 100 traditional healthcare practitioners live in and around the Gandhamardan hills. These practitioners provide medical facilities to about 50,000 tribal people. There are two ayurvedic colleges and hospitals on both side of Gandhamardan -- one in Bargarh district and the other in Bolangir.

Local people have great faith in ayurvedic practitioners and in many villages, their main occupation is to collect herbs and supply them to companies such as Dabur and Zandu. Some of these villages include Khandijharan, Manbhang, Magurmal and Cherenga jhanj. A study conducted by M Brahma and H O Saxena of the Regional Research Laboratory recorded the medicinal uses of nearly 200 species, out of which they found the uses of 77 to be new or "interesting".

Unfortunately, this information has not been documented comprehensively. Experts fear that in the next 30 years, this knowledge and information could be lost. Besides, many valuable medicinal species, which have high market value at the national and international level, can fetch a substantial income to the tribal people if they are propagated in a big way in the wasteland available near Gandhamardan.

Manbhang, a village pecked on the foothills of Gandhamardan, has a very special relationship with these hills. The head of this tribal village Dhananjay Bhoy is a treasure house, so far as history of Gandhamardan is concerned. This was the first village to oppose the arrival of balco . "The fight against balco was a fight for survival," recalls the 85-year Subhadra Mallick, who led the struggle. Worried about the fate of the hills, that sustains some 1.3 million people, she says: "We are like the old trees in the forest. Nobody can take it away from us." Gandhamardan is our mother, father and God, says Dhananjay Bhoy.

The tribal communities are the most dependent in Gandhamardan says Arttabandhu Mishra, a professor at Sambalpur University, who has conducted research on the tribal people of this area. Pradeep Purohit of the Gandhamardan Surakshya Yuva Praishad claims that the number of people dependent on the hills for their livelihood has increased.

"The landless people around the hills depend on the forest throughout the year to such an extent that many of them do not want to migrate. Around Gandhamardan, about 30 per cent of the people are completely landless and the rest majority are small and marginal farmers. The major chunk of land is owned by just two per cent of the population," says Soubhagya Pradhan, who has done extensive studies on the Gandhamardan.

The abundance of forest wealth has attracted many traders from far-flung areas to do business. The traders now outnumber the local tribal population. The outsiders, who don't have any interest in the forest ecosystem, exploit Gandhamardan.

The present threat to Gandhamardan is the recurrent drought situation in the region. Due to drought, pressure on Gandhamardan has increased, says Pradeep Purohit who also led the campaign against balco . Moreover, due to its abundant water resources, nomadic communities from Rajasthan bring thousands of sheep and camels to Gandhamardan for grazing, thereby causing harm to its sensitive ecology. Purohit had brought this to the notice of the local forest officials. The issue even came up for discussion in the state assembly.

Another pertinent threat has been the organised smuggling of medicinal plants from Gandhamardan. It is an open secret that big Ayurvedic companies have their agents around the hills, who collect rare plants illegally. Not only do they smuggle these plants, they cause severe damage to the species, thereby preventing their further growth, says Suna Vaidyaraj, a local herbal practitioner, who has been in the business for more than 30 years. The local forest officials, on the other hand, express helplessness saying that they don't have proper infrastructure to fight the organised gangs of smugglers.

Medicinal plants from Gandhamardan, as the epic Ramayana says, saved the life Laxman, thus making it possible lord Ram's victory over Ravana, a symbol of devil. The balco agitation proved the people's emotional attachment to this legendary mountain range. It is just a good wish that the local residents continue preserve it.