As the Cauvery river dispute between Karnataka and Tamil Nadu gets reduced to a politico-legal wrangle, focal issues remain unaddressed 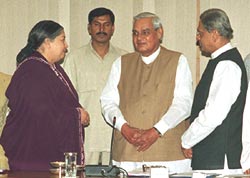 When Karnataka chief minister (cm) S M Krishna was asked to disclose his "strategy" for resolving the raging Cauvery river dispute with Tamil Nadu (tn), he wrung his hands and said: "The only panacea is rainfall." While Krishna lobbed the ball in "Nature's court", his tn counterpart -- J Jayalalithaa -- moved the Supreme Court (sc) filing contempt cases against him. On October 24, the sc observed that the Karnataka cm was prima facie guilty of contempt of court for "wilfully disobeying" its order to release the river's waters to tn. Last heard, Krishna had decided to open the sluice-gates.

The build-up to the current showdown began when violent riots erupted in Karnataka in protest against the September 3, 2002, apex court directive. The sc had then ordered the state government to release 1.25 thousand million cubic feet (tmc) of Cauvery water to feed the Mettur reservoir in tn. Though Krishna has relented, the crisis is far from over. Ironically, the century-old conflict between the two riparian states for a greater share of the Cauvery has meandered away from core issues. Scientists, agriculturists and concerned citizens have for long been trying to drive home the messagethat the beleaguered river will run dry unless urgent steps are taken to ensure efficient water management in the Cauvery basin.
A N Yellappa Reddy, former secretary, department of ecology and environment, Karnataka, makes a significant point: "In the last 50 years, both the governments have vied with each other for more and more water from the Cauvery. Farmers have been encouraged to grow highly water-intensive cash crops such as rice and sugarcane."

The construction of dams in both Karnataka and tn, followed by a rash of irrigation development projects, has sent the demand for water from the river soaring further in both states (see map: Irrigation a major irritant). The impact of these developments is quite evident now. According to a Central Water Commission report, water utilisation level in the Cauvery basin is the highest among all rivers in the country. In fact, the estimated demand of approximately 900 tmc per year has far outstripped the actual yield of the river -- around 780 tmc. "While Karnataka crossed the limit of possible water use in the basin in the mid-1990s, tn had already reached this stage in the late 1970s.... All the cards are...on the table," observes S Guhan in his book, The Cauvery River Dispute -- Towards Conciliation . Guhan is a former Indian Administrative Service officer and senior fellow in the Madras Institute of Development Studies (mids).

The Cauvery tangle is, therefore, said to be far more complicated than all other major river disputes in India, including those relating to Narmada, Krishna and Godavari rivers. While these focus on sharing of untapped surplus waters, the Cauvery conflict involves resharing of a resource that is already being fully utilised. Worse still, there is further pressure on it. Not only from agriculture, but from cities and the industry as well. Will the over-exploited river be able to withstand this stress for long? Experts are doubtful.
With agriculture consuming the lion's share of water, most of the blame for the situation reaching such a pass must be borne by the sector. "Flawed crop planning that promotes continuous rice cultivation is responsible," declares I C Mahapatra, former chairperson of the Indian Council of Agricultural Research (see box: 'Give science priority over politics'). Mahapatra prepared an affidavit statement on behalf of the Karnataka government that is among the most credible and detailed scientific documents now available on the Cauvery imbroglio. His view seems plausible since rice requires much more water than any other cereal or crops such as oilseeds and pulses. The productivity of rice per unit of water is also low.

Reddy concurs and adds: "This trend has gradually disrupted the original cropping pattern of this region, comprising dryland crops (maize, ragi, millet, etc)." The result, he feels, is a "complete collapse of the rainfed agro-biodiversity that sustained and nurtured the Cauvery basin". Mahapatra says: "The lower Cauvery basin receives rainfall from August to December. The distribution of rain during growing season has a crucial role to play in the cropping pattern. So, a rational approach to rice cultivation would be to confine it to this period in tn." But logic appears to have taken a backseat, with local farmers practising triple cropping of rice.

In tn's delta area, rice varieties are grown in three phases:
• Kuruvai from June to September

• Thaladi from October to February

• Samba from August to January

Since rainfall is a vital input, kuruvai --cultivated in peak summer -- is unsuited to tn. It requires far more irrigation water for sustenance (see table: Season-wise rice productivity per unit of water in Cauvery delta), a factor that the water-stressed basin states can barely afford to overlook. Rice and sugarcane are cultivated in Karnataka too.

According to Reddy, the problem runs deeper: "It is no longer only a question of grossly inefficient use of irrigation water. Unplanned cropping has also taken its toll on the soil." The use of flood irrigation leads to constant waterlogging in paddy fields. Due to lack of vertical drainage, soil health has deteriorated steadily along the basin. Consequently, land productivity has suffered and this has increased the need for irrigation water. "It is a vicious cycle," points out Reddy.


It has been established that inefficient and irrational management of Cauvery's water is the root cause of this protracted struggle. To compound matters, governments have failed to explore any other source of water. "Modern concepts of water management in a river basin are based on the conjunctive use of surface water, groundwater and rainfall to support crop water requirement," says Mahapatra. Ironically, the track record of the basin states points towards a completely different approach.

Karnataka, for instance, has invested heavily in large dams on the Cauvery to meet its growing water needs. Between 1938 and 1983, it set up as many as 15 gigantic irrigation projects on the river (see graph: Irrigation development in Cauvery basin ). To make things worse, there has been no let-up in construction of new structures. The total land under irrigation in the state has thus increased exponentially in the last 50 years.

Is there a viable alternative? "Yes," says Madan Gopal, a senior government official in Karnataka. "At least 11,000 traditional water harvesting structures such as tanks and ponds exist in the state's river basin. Most of these have silted up and dried, as the local farming communities which maintained and used them earlier have stopped doing so." If the government makes a serious attempt, these structures can be revived and used to trap rainwater that now flows into the sea. They could serve as additional storage facilities, easing the pressure when the monsoons play truant.

Interestingly, more than 60 per cent of traditional structures in Karnataka are sited in the southern plateau region. This includes the districts of Mandya, Hassan and Mysore -- the state's largest producers of water-intensive cash crops such as sugarcane and rice. "The scope for restoring traditional structures and building such new small-scale storage facilities should be carefully considered while determining the river water sharing pattern," says K V Raju, senior academician with Bangalore-based Institute for Social and Economic Change.

The Cauvery Monitoring Committee's report has lent weight to the experts' stand. The panel, headed by A K Goswami, secretary, Union ministry of water resources, recently submitted the document to the sc and Prime Minister Atal Bihari Vajpayee. It described the water storage position of Karnataka as "very poor". The state is "depending on only one source -- canal water supply", said the report and laid emphasis on the urgent need to "explore other possibilities".


The verdict is, therefore, unanimous. Both the state governments must refocus their strategy, and look beyond water-guzzling cash crops and large dams if the Cauvery is to be salvaged.

So far as alternatives are concerned, several feasible solutions have been suggested. "First of all, only one crop of rice should be grown under irrigation in a year in Karnataka as well as tn. Further, it should ensure maximum support of rainfall," proposes Mahapatra. In other words, while the period of rice cultivation should be limited to June-July and October-November in Karnataka, tn should stick to an August-September and December-January schedule. This should be combined with a second short duration of dryland crops such as soyabean and maize. And these must not depend on surface irrigation.

Such a course correction will, however, have a bearing on the water level in the river basin only when the governments agree to tap other sources of water. "Greater exploitation of groundwater and optimal conservation of rainwater are important to nurse the ailing Cauvery back to health," says Guhan.

The big imponderable, of course, is whether the ruling parties will be able to convince the farming community, which wields considerable clout in tn and Karnataka. "Stakeholders have to be involved in the decision-making process," says Reddy and adds, "They should be presented with hard evidence analysed by scientists about the dismal water situation and alarming soil health."

S Janakarajan, associate professor, mids, goes a step further. He feels that a direct dialogue between stakeholders is the only way out. "They may fight initially but once they are given a lucid picture, they will jointly try to work towards a solution ," he says optimistically.

"A panel representing all user groups in the two states -- not just farmers but also urban consumers and the industry -- should be formed. This body should be empowered to formulate the future strategy to manage and share water," feels Raju adding: "State governments must agree to accept the verdict reached by the group."

This is possible if the mandarins in Bangalore and Chennai so desire. We may then witness the long-awaited final act of the Cauvery drama. Indeed, the ending may yet be a happy one.

With inputs from J Saravanan in Chennai