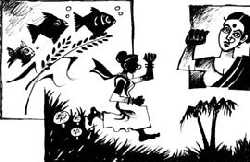 the Chennai-based M S Swaminathan Research Foundation ( mssrf ) has launched the Biovillage project in an effort to help poor rural families of Pondicherry avail knowledge of scien-tific techniques of farming and financial assistance. M S Swaminathan, the chairperson of the foundation says, "We wanted to create a process that allows landless peasants, especially women, to take advantage of the applications of biotechnology." While one part of the project consists of women's groups involved in cultivation and pisciculture, the other comprises of small farmers who are being trained by scientists to conserve natural resources like land and water.

The mssrf went about the task of looking for an appropriate project site in 1991. It focussed its attention on three villages on the outskirts of Pondicherry - Pillayarkuppam, Sivranthakam and Kizhur. "Landless-ness was common in the region and there were many small impoverished farmers. The situation was ideal for launching our experiment," relates R S Shantha Kumar Hopper, the project coordinator. Project Biovillage was thus launched and was financially backed by the Asian Development Bank and the International Fund for Agricultural Development. The government of Pondicherry also provided some funds. The United Nations Development Programme took over the project in July 1994, and the project which till then had functioned as an experiment, was declared fully operational in January 1995. Now 19 villages, spread over an area of 3,680 ha are actively involved in the project, with 24,000 villlagers parti-cipating on a daily basis.

According to mssrf researchers, it is the women who are managing the front ranks of the Biovillage campaign. Initially, the foundation selected mushroom cultivation, hybrid vegetable production and pisciculture, for these could be introduced easily. "Our approach was aggressively market-oriented," explains Hopper. The first step was forming groups of women who were to be 'technologically empowered'. The above task was entrusted to sociologists who were part of the mssrf' s core research team. "We went from village to village and met the women - most of whom were struggling to survive with whatever their arrack (country liquor)-addicted husbands provided - and offered them an alternative," says Rajashekharan Pandy, a social scientist. The response was wary and sceptical. Nevertheless, three groups were formed. Now there are 14 groups with 10-13 members each. Some women grow mushrooms and flowers like jasmine, while others produce vegetables or propagate fish in community ponds.

"My son goes to Pondicherry everyday to take karate lessons. It upsets my budget a bit, but I can manage now," says Saroja who lives in Mangalam village in Pondicherry. There is a tinge of pride in her voice as she has come a long way since the days when she could barely make both ends meet with the earnings of her husband, a landless agricultural labourer. Now Saroja earns Rs 150 per month, sometimes more, by growing mushrooms. Saroja is the leader of a group of 10 independent women entrepreneurs producing mushrooms and selling it to groceries and restaurants in Pondicherry city. S V Shanthy, a graduate in agricultural sciences teaches them how to nurture the mushroom spawns and cultivate them while M Srinivasu, a marketing expert, helps them establish contacts with prospective consumers. The group itself was formed under the guidance of Pandy, who taught the women how to function as a team.


Pandy and his colleagues have taught the women how to manage their own activities. "We taught them how to establish their own laws, set down rules for how much they should save every month, when to hold their meetings and such other issues," explains Pandy. Each group has a secretary and a treasurer and together they fix an amount that each member has to contribute every month. This amount forms the core fund and the group opens a bank account with this money. After six months, any member can take a loan against this fund at an interest of 36 per cent, which is far below the 120 per cent demanded by local money-lenders. But the loan application has to be approved by the entire group. For instance, if Saroja wants to take a loan to build another mushroom shed, she has to convince other members of the group that she really needs it. The group also decides on the penalties that have to be imposed on an erring colleague, who fails to pay back in time. "But repayment is rather prompt because members want to avoid the social disgrace associated with defaulters," says Pandy.

The production process for each item differs. Mushroom producers, for instance, get their supply of raw mate-rials (spawns) from the mssrf, but those growing vegetables buy their seeds directly from the Pondicherry Agricultural Service and Industries Corporation. Similarly, different products are marketed independently. Fish cultivators, for instance, hire vehicles from the Fisherman Cooperative Federation Transport, a state government agency and sell directly in the local markets. But the mushroom group is yet to strike out on its own. A mssrf representative collects the packets from the women daily and sells them in Pondicherry. The money is collected on their behalf. "We maintain a register for each village, recording the amount produced by each member," explains Shanthy. "The money due to each member is distributed at the end of each month."

Another mssrf resource unit comprising of agricultural engineers and trained technicians is building up contacts with local farmers who own plots of land, be they tiny patches. "A farmer uses an average of 6,500 litres (l) of water to produce one kg of paddy (the main crop of the region) when 5,000 l is enough to do the job," says D Thiroutchelvame, a member of the resource team. This is quite dangerous because groundwater in Pondicherry is under severe threat due to the intrusion of sea water and overexploitation. The water level is sinking by 1.5 m to two m every year due to excessive pumping. The mssrf team is trying to get the message across to the farmers that if they go on misusing resources like water they will soon be left high and dry, quite literally. "We are mobilising the local farmers to clean up their tanks and desilt the ponds and are organising training programmes," says Thiroutchelvame.

Salvaging degraded land is also on the agenda of the Biovillage project. "Our message to the farmers is not to use organic chemicals. We are undertaking integrated pest management programmes to show them how farm-brewed pesticides can serve as effective alternatives," says Thirumalai, an agricultural scientist from Pondicherry University and an enthusiastic member of the mssrf team. He informs that the farmers have responded quite favourably. Ten task forces consisting of farmers who have agreed to allot half a hectare each of their individual plots for experimenting the mssrf -method, are being set up. "I love the smell," exclaims Thirumalai as he sniffs the pungent mixture in an earthen pot half-buried in one of the plots. The pot contains a pesticide made out of a particular species of plant which grows in abundance in the surrounding area.

The mssrf staff is bubbling with excitement, as the project they have been toiling over for the last five years, has begun bearing fruit. However, some questions remain unanswered. Are not the people in the biovillages, especially the budding women entrepreneurs, still too dependent on the mssrf ? Not only are they constantly supported by the expert team, they also have to depend on external agencies to supply them the raw material essential for running their 'businesses'. "I can earn much more if only I can get hold more spawns," grumbles Saroja.

"We are getting there," assures Hopper. He plans to phase-out all mssrf activities by the year 2000. By then, a "biocentre" will be set up in the region, to supply the entrepreneurs all the raw materials, including spawns and seeds and will be run by the villagers themselves. A biovillage society comprising members of the women's groups and the task forces shall be established. "It will soon be a force to reckon with. We are already gearing up our women group leaders for the next Panchayat elections in Tamil Nadu," declares Pandy.