Rainfall is scarce, groundwater levels have fallen; what exactly is happening in Rajasthan? 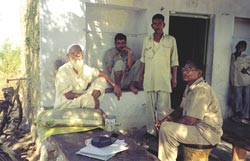 I travel in drought-hit Rajasthan. I want to see, and record. What does really happen when an area is hit by drought?

It doesn't rain over Rajasthan the way it used to. Less rainfall has led to a drop in groundwater levels. This year, Rajasthan got 208 mm rain. That's 55.8 per cent less than normal (531 mm), and close to last decade's minimum of 197 mm.

This way, technically speaking, we needn't say that all of Rajasthan is dry.

Many state government departments have thrown themselves into the business of tackling drought. I counted: department of agriculture, department of irrigation, the public health and engineering department, the relief department, department of rural development and the watershed department. It is good to see drought being approached from so many angles. Yet, I wonder: won't these approaches clash?

The government approach consists of what officers call 'works'. It is a reactive approach; relief measures taken after the drought. According to Ram Lubhaya, secretary, relief, "The principle of relief is as and when required but we are giving preference to soil conservation and water harvesting. We have shifted our focus from so-called only digging and filling work to conserve water because more money was going waste in taking short term measures." He briefed me about huge investments in relief work and provided a rough figure.

The figures look good. But the drought still looks bad.

N K Sharma, Additional Collector (Development) and ceo (Zilla Parishad), does not see any solutions except tankers. "We are getting water in Ajmer town from the Bisalpur dam through a pipeline. We are supplying water to 208 villages by 411 tankers from nearby sources. We do not have any option except to supply water.

People are in trouble. What villagers of Rajoshi told me is indicative of what many other villagers are experiencing.

Rajoshi is around 35 kilometers from Ajmer. Naseer, a villager, has dug a new tubewell striking water at 600 feet. That also in a small layer, so he is not sure for how long it will run. When asked about water harvesting structures made by the government, he says, " Sarkar ne karib 15 rapat banaye, kuen marrammat karayen, nadiya banayee, panghat banayee par paani kaha se labe, ye to upper bala hi dega. Chhat se paani nneche Aaye to Roke. Upper wala hi ruth gaya ." (The government has made reports, maintained wells, constructed nadis and panghats, but where will the water come from? We can only store water if it flows from above. Even the gods seem to be annoyed).

Makkan (33), from the nearby Kabra village, informs, "The wells have gone down by 100 feet or more. Between 6 to 8 a m in the morning, 5 to 6 buses leave for Ajmer from the village. Each bus carries about 200 people who go to work as labourers. If they find work in Ajmer they come back here in the evening with Rs 40-50. If not, then they leave for cities like Delhi and Ahemadabad."

He adds, "We are going for some more wells to get water for irrigation and taking money on a very high interest (3.5 per cent a month). Now the lenders have started refusing us money because there is no guarantee of water below."