They may not seem like much today, but only a fool will undermine the potential of fuel cells 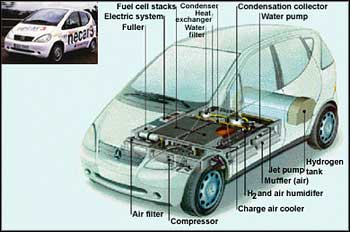 Although it will take large amounts of research investments and government incentives before fuel cells become a commercial reality, there is no reason to get disappointed. The advantages of fuel cells are not restricted to cutting down emissions of greenhouse gases. Fuel cells are silent and economical. Praveen Dhamija, principal scientific officer at the government of India's ministry of non-conventional energy sources (mnes), says: "Unlike the noisy generator sets currently used, the fuel cells operate at zero decibels."

Moreover, they are much more fuel efficient as compared to, say, the internal combustion engines (ices) used at present in automobiles. That is, fuel cells use a much greater percentage of the energy contained in a fuel than an ice or a coal-based thermal power plant.A Global Environment Facility (gef) report entitled Fuel Cell Bus Development in India states that vehicles running on fuel cells will "achieve energy efficiencies more than twice those of internal combustion engines". Simply put, it means that you get more out of the same amount of fuel, more value for money. Maintenance costs are also expected to be very low as there are no moving parts in the automobile.

Fair enough, it is promising. But what all can fuel cells do? Actually, more things than you can imagine. Just take a look around you, and guess. Chances are that you will be right. Automobiles, power generators, domestic heating, air-conditioning... you can on and on. Fuel cells are already being used in several developed countries; in buses, cars, military bases, wastewater treatment plants, cellular phones, cabin lamps and laptop computers.

While the early interest of the corporate sector in fuel cells was a result of the oil crisis of the 1970s - the whole world became interested in renewable energy - it died out in the 1980s. But, in the 1990s, the push for fuel cells is coming from environmentalists and regulatory authorities. Fuel cells are seen as 'green' energy sources to counter the rising concentrations of greenhouse gases in the atmosphere, particularly of carbon dioxide (see p60: Fuelling heat). Those campaigning against global warming are pushing for speedier development of fuel cells, while those fighting against air pollution see an answer to ambient air pollution in them. With stringent laws gradually coming in across the world against vehicle exhaust emissions, major automobile manufacturers are turning to fuel cells.

In 1999, Iceland announced a 10-year plan to convert its cars, buses and fishing fleet to fuel cell power, pledging to become the world's first hydrogen-powered economy. Its capital Reykjavik suffers from severe air pollution from automobiles. California in the us has already forced automakers to take fuel cells seriously. By 2004, one-tenth of all cars sold in the state must be zero emission vehicles or else the companies would be barred from the market. This has eked out investments to the tune of us $1.5 billion on fuel cells.

"Of all the alternative drive systems around at the moment, fuel cell technology is by far the most promising," points out Ferdinand Panik, director of the fuel cell project group of DaimlerChrysler, one of the biggest automakers in the world. "Fuel cells are seen as the long-term solution to environmental problems associated with road transport and power generation," explains A Viswanathan, deputy general manager of research and development (r&d) at Bharat Heavy Electricals Ltd (bhel), Hyderabad. He heads a fuel cell feasibility project funded by the gef.

But why don't we see fuel cells all around us? Well, as would be the case with any new technology, it will take quite a while and a lot of research/development before fuel cells realise the expectations. Fuel cells are still relatively large and heavy compared to conventional engines. Refueling is problematic as the fuel has to be at freezing temperature while filling up, as has been seen at a station in Hamburg, Germany. Moreover, the cost of the cells as well as the infrastructure to operates them is very high, mainly due to use of expensive materials produced in low volumes. As manufacturing problems are tackled, lower material costs would bring prices down considerably. However, it is not just technical. Commercial and political factors play a far more important role in dictating the future of fuel cells.