Ludhiana is going all out to clean up Buddha Nallah, the sole receptacle of its industrial filth 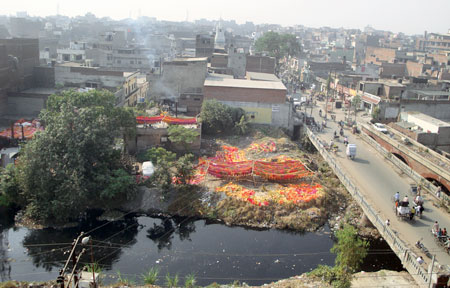 Nirbhai Singh, an undertrial, wrote a letter from Ludhiana’s Central Jail five years ago and stirred industry and government into action. Addressed to the High Court of Punjab and Haryana, the letter expressed concern over pollution in the city. The court then began to look into the state of environment, in particular the Buddha Nallah. The government took up the matter in earnest and as a result, Ludhiana now has a Rs 650 crore remedial action plan. It aims to treat all its wastewater by March 2012.

The drain’s 14-km stretch that falls within the city’s municipal limits has been the holy grail of pollution abatement. In the past 20 years, the state government has spent Rs 377 crore in its failed attempts to clean this sole receptacle for the city’s industrial effluents, filth and sewage. It even approached Balbir Singh Seechewal, holy man known in Punjab for de-weeding and de-silting a stretch of river Kali Bein with the help of thousands of kar sevaks (volunteers).

Seechewal said nothing can be done until the government stops the incessant discharge of wastewater into the drain. In the past two months Punjab chief minister Parkash Singh Badal has convened more than a dozen meetings to fast track the cleaning up of the nallah. Investigations are on to find out if treated nallah water can then be diverted to irrigate fields downstream of the city. 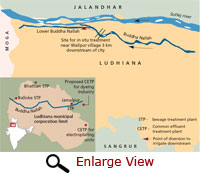 For a large part of its 40-km course, Buddha Nallah runs parallel to the Sutlej and joins the river in the northwest corner of Ludhiana district. Those who have seen Buddha Nallah in the 1960s remember it is a seasonal freshwater stream and source of drinking water. Today there is thick sludge-like black water in its place; the soil on both banks is contaminated up to 1,200 metres, the Punjab Agricultural University found in 2006. Groundwater too, according to officials from the municipal corporation, is not potable till a depth of 45 metres.

Ludhiana, where people live cheek by jowl, came to be known as the Manchester of India for its many factories, especially for bicycle parts and hosiery. According to the latest estimate in June this year, the Punjab Pollution Control Board (PPCB) counted 1,060 water polluting industries located within its municipal boundary.

The Central Pollution Control Board issued a moratorium until December 31, 2010 on new industrial units or expanding existing businesses. This was after the central board in consultation with the Union environment ministry identified 88 critically polluted industrial clusters in the country in January; Ludhiana was one of them, something that Singh had warned from prison in 2005.

In 2006, the PPCB identified electroplating and dyeing units as major polluters. The following year a common effluent treatment plant was made operational for 500 electroplating units that released highly concentrated discharge containing heavy metals such as zinc, nickel and chrome. The plant is run in a publicprivate partnership by an association of industries. It was set up at a cost of Rs 3.5 crore by JBR Technologies, a private company, to ensure zero liquid discharge.

“This means no water is allowed to fall on the earth,” said Rajinder Singh, company head. The rejected solids and contaminants are taken to a hazardous waste facility and the treated water is supplied for reuse via a pipeline to a dyeing unit 500 metres away.

A majority of the small-scale electroplating units have joined the common effluent treatment plant, which has a capacity to treat six million litres of wastewater each month. The amount of water the treatment facility receives has risen from 1.28 million litres in January 2008 to 4.13 million litres last month, said Singh. The company collects effluents from individual units in tankers and charges 25 paise for lifting and 35 paise for treating each litre of water.

Pollution control board officials said they keep a strict vigil, but do not rule out clandestine discharge of effluents in the drain by some of the smaller units as these generate only 500 litres of effluents per day. The low volume is easy to tackle but harder to monitor, said PPCB officials.

Ludhiana’s dyeing industry is another ball game. More than 80 per cent of the effluents is generated in five clusters, while the remaining comes from units that are scattered. The 10 large-scale dyeing units in the city along with 258 small and medium-scale ones generate in excess of 150 million litres each day. The state government has proposed two effluent treatment plants for all these units. A plot of about 13 hectare (ha) has been identified for a plant with a capacity of 100 million litres at Tajpur road; a plot for the second plant is in its final stages of selection.

Buddha Nallah carries 550 million litres of wastewater each day to the Sutlej; 350 million litres are domestic sewage (see table). The city’s sewage treatment capacity is inadequate as the three facilities commissioned since 2007 can treat 311 million litres each day.

In September, environment minister Jairam Ramesh paid a visit to get a first hand account of the drain. He assessed a proposal submitted by scientists from Pune to clean the drain (see The finishing touch,). The project report quoted installation cost of Rs 15.30 crore and Rs 7.55 crore over five years for maintenance. Ramesh is keen on getting the project started by December 2010.

There are other plans to upgrade two of the existing sewage treatment plants by September 2011 and enhance treatment capacity to 466 million litres. This will be sufficient to take care of sewage generation until 2025. The corporation intends to give the entire municipal area access to sewer lines to prevent direct discharge into the drain; this will cost Rs 268 crore.

The corporation will have to do more than that because many of the city’s dyeing units discharge their waste into sewers. “It’s all about economics,” said V K Goyal, former chief executive officer of Vardhaman Industries. “If bribing an official costs less than treating wastewater, why would anyone spend on treatment?” 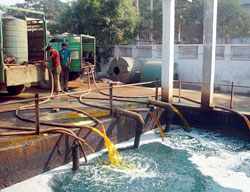 Dyeing units on the nallah banks are known to discharge openly. Others are connected to the sewerage network. “This mixing of industrial and domestic wastewater hampers the performance of treatment facilities and affects the machinery,” said V P Singh, superintending engineer, Ludhiana Municipal Corporation. The pollution control board believes separate conveyance for dyeing industries would solve the problem.

This is likely to happen by November 2011. It is an ambitious plan and would require digging up large parts of the city, said Goyal. “I hope they are successful since some units are 10 km away,” he added.

Buddha Nallah has for long been a tragedy of the commons. The city has ruined it by emptying its industrial effluents and domestic sewage into the drain. The authorities are now trying to undo some of the tragedy. They plan to irrigate 19,424 ha in Ludhiana and Moga districts once the infrastructure to treat all the wastewater is in place.

The PPCB is preparing a project report on diverting the drain before its confluence with the Sutlej into Buddha Nallah lower, a dry seasonal canal. A scientist from Punjab Agricultural University is currently studying the feasibility of the proposal.