What's eating up the state's water 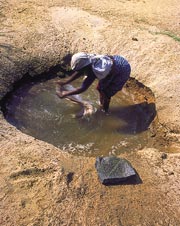 All places in Kerala, except a few in Palakkad, got more rainfall this summer than the national average. “Considering that India receives only 1,100 mm of rainfall as long period average, isn’t it absurd to say that Kerala suffered acute water scarcity even after getting 2,270 mm of rain in 2003,” says Achyuthan. Unlike other states in India, Kerala is blessed with regular rainfall: 60-65 per cent from the four-month-long south west monsoon, which begins in June, and 25-30 per cent from the north east monsoon during October-November. Rest of the rain comes during summer. But since 1982 the amount of rainfall received has fluctuated wildly; since 1999 there hasn’t been a single year when the annual rainfall touched the average value of 3,107 mm. On an average, annual rainfall has dropped by 15-20 per cent.

In 2002, the rainfall during the north east monsoon and summer helped in getting over the poor south west monsoon. But in 2003 even the north east monsoon failed, and in January-March 2004 no place in the state got rains. Data collected over the last 50 years shows that the amount of rainfall during the south west monsoon roughly follows a 30-year long and 11-year short cycle in Kerala. Data gathered in Kozhikode shows that annual rainfall in the district has decreased since 1900. Going by the two cycles, people hoped that the trend would reverse soon but there is bad news for them because the number of rainy days in Kerala is falling drastically. In Tholpetty forest range of North Wayanad, the average annual rainfall in 1961-1970 and 1991-2000 was 1558.91 mm and 1653.04 mm. But the number of rainy days came down from 111 days in 1961-1970 to 95.6 in 1991-2000. At Kozhinjampara, in Chittoor taluk of Palakkad district, there have been a minimum of 47 rainy days and a maximum of 104 rainy days between between 1976-77 and 2001-02. The mean for the whole period was 71 days. All these figures indicate that monsoon in Kerala has become unpredictable.

“That Kerala is a water-surplus state is a well-perpetuated myth,” says Basak, who prepared the state’s first water policy in 1992. “If you look at the per day per capita availability of water, Kerala ranks lower than Rajasthan and may be at par with the national average,” he says.

But why does a 15-20 per cent drop in rainfall hits Kerala so hard? Have the rains failed Kerala or has the state failed to preserve its waters. Kerala’s 44 rivers are short, but they recharge the groundwater — rains alone can’t do that because most parts of the state have impermeable rocks and laterite. Except Periyar, other rivers become a trickle during summer but even then they recharge wells and other surface water bodies. “Though the rivers turn shallow in summer, water still flows below their sand beds. This water below helps wells and ponds to retain water even in peak summer,” says Achyuthan. “It is this sub-surface water that has been jeopardised over the years.”

Jeopardised by indiscriminate sand mining in all rivers of the state (see also: Mining ban: Slipping like sand). The entire sand in seven rivers falling into the Arabian Sea in the Greater Kochi Region will be mined out in less than a decade, warns a study by CESS. These rivers have an estimated 56 million cubic metres of sand, but about 6.63 million cubic metre of it is being extracted every year at 981 locations. This mining is shocking because only 0.086 million cubic metre of sand is replenished each year. Apart from retaining water, sand regulates the water flow in the rivers, particularly in lean months. CESS estimates the mining will reduce river channels by four to five metres within a decade. The Central Water Commission has already found that riverbeds are declining alarmingly in several places. “In many places sand has been completely extracted till the clay bottom of the river,” says N K Sukumaran Nair, general secretary of Pampa Parirakshana Samithy, a non-governmental organisation (NGO) fighting to save the Pampa river. In April 2004, the state government stopped issuing permits for mining in rivers.

While sand mining dries up rivers, the Central Ground Water Board (CGWB) and Ground Water Department of Kerala have found that groundwater too is being over exploited. They say Kerala has 6.84 BCM of replenishable groundwater. Of this, 6.229 BCM was considered to be usable but in 1999 itself 2.693 BCM was already being used annually. The two organisations also found that groundwater was either over-exploited, critical or semi-critical in 15 blocks of the state. In 33 other blocks, 70 per cent of the groundwater is being used.

When Kerala was formed in 1956, the total cropped area was over 2 million hectares. Paddy was the dominant crop, accounting for about 35 per cent of this area, followed by coconut at 21 per cent. 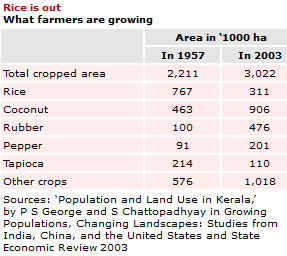 A paddy field holds water for roughly 90 days, and most districts of Kerala grow it twice a year. This helps in groundwater recharge immensely. In 1975 the area under rice fell to 30 per cent of the total cropped area, but still 8.81 lakh hectares was still being used for this crop. But the State Economic Review for 2003 says the area under paddy cultivation has now come down to one-third (3.10 lakh hectares) of that in 1975. On the other hand, the area under coconut plantation is increasing at a rate of 3 per cent per annum in the nineties. (see table: Rice is out)

Paddy fields converted to non-agricultural use are mainly used for constructing buildings and laying roads and railways, says ‘Population and Land Use in Kerala,’ a chapter written by P S George and S Chattopadhyay in Growing Populations, Changing Landscapes: Studies from India, China, and the United States, published by National Academies Press. Buildings and roads of course don’t recharge water.

Kerala’s farmers are replacing uneconomical and labour-intensive paddy with perennial crops like coconut and areca nut, but all major and minor irrigation projects in the state have been built for large-scale rice cultivation. Huge investments were made on these irrigation projects, but little thought was given to improving water supply to semi-urban and rural areas. Most of these irrigation projects (16 completed and another 15 in the pipeline) were copies of those done in Bihar, Madhya Pradesh and Uttar Pradesh. “The projects in these states are suitable for semi-arid regions, but Kerala is a humid tropical region,” says Basak. By the time most dams and irrigation canals were constructed, the areas to be irrigated weren’t being used for paddy.

Even the State Planning Board admits the mistake. Till 2002-03, Kerala had spent Rs 3,245 crore on irrigation. About Rs 2,220 crore (68 per cent) of this was on major and medium irrigation projects. But “such a huge investment has not succeeded in generating commensurate increase in area irrigated,” says the planning board’s 2003 Economic Review.

When Kerala began planning its irrigation projects, planners and engineers wanted to convert the maximum agricultural land possible into paddy fields. These engineers and planners, who estimated that only 50 per cent of the rainfall could be used for cultivation, estimated that several irrigation projects were needed to get more water. Their planning and projects has now led to “irrigation in excess of the actual demand”. 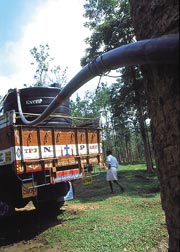 “An attempt is being made to consume more water than the state really requires for irrigation. The gross inefficiency of Kerala’s irrigation projects and its persistence have retarded the development of other efficient water management strategies,” says V Santhakumar, of the Thiruvananthapuram-based Centre for Development Studies.

A major chunk of the money for Kerala’s irrigation projects comes from the Central government, whose irrigation policies are shaped by the requirement of semi-arid regions. When the Centre distributes funds for irrigation projects, planners try to get the maximum money even if their states don’t need such projects. Irrigation projects, necessary or not, are then built but drinking water or storage schemes don’t get attention.

“As long as people were using wells, water was available for a longer period of time. But not now because water is being lifted out mechanically,” says E J James, executive director of CWDRM.

Faced by growing demand, the state has signed several expensive agreements with international organisations for water supply projects. KWA will implement a Japan Bank for International Cooperation project in Thiruvananthapuram and Kozhikode and three rural areas. The entire cost will be Rs 1,787.45 crore; the work in Thiruvananthapuram alone will cost Rs 215.12 crore. “Has anyone assessed the need for such a project?” asks a CESS scientist.

A project has been planned for Kozhikode too, but Achyuthan claims water shortage in the city could end if public wells and ponds are maintained properly. “Instead of this, they want to spend Rs 430 crore to bring water from the Peruvannamozhi river basin 35 km away,” he says.

The 450-crore Jalanidhi project, which is being implemented by the Kerala Rural Water Supply and Sanitation Agency, is also creating controversy. The World Bank has lent Rs 300 crore for Jalanidhi, which began in 2001 and will cover three million homes. Each micro-level watershed project under Jalanidhi is expected to cost between Rs 5 lakh to Rs 8 lakh. This means a capital expenditure of Rs 2,250 on each beneficiary family. Jalanidhi water will be available to people at a rate of Rs 6 per kilolitre, three times that charged by KWA. The argument is that KWA currently spends Rs 8 on supplying one kilolitre of water. “The project will slowly take the government out of water supply though it is the state’s duty to provide water at a rate affordable to people,” Achyuthan.

While such expensive projects are being taken up, the example of Olavanna has been forgotten. This village, seven km away from Kozhikode, has been running its own independent drinking water project since 1987. Using ponds and wells, the village supplies 400 litres of water daily to each household. “These community projects have more relevance today because they are up against the market values propagated by the agencies of globalisation,” say Babu Parassery, ex-president of Olavanna panchayat and T P Kunhikannan of the NGO Kerala Sastra Sahitya Parishad.