West Bengal, severely affected by arsenic in its groundwater, takes slow but steady steps to deal with it 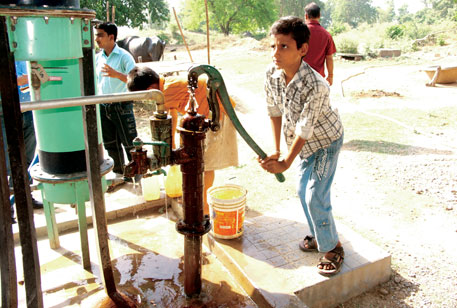 Groundwater contamination by arsenic has been a major concern across the globe. In India, this highly toxic chemical exists in natural form in Uttar Pradesh, Bihar, Jharkhand, West Bengal and Assam. Exposure to it can cause discolouration of skin, warts and even death.

India has, however, been slow in tackling the problem. Till date, only West Bengal has rolled out a plan to make its groundwater fit for consumption. The state government aims to provide every locality at least one source of arsenic-free water by 2013. 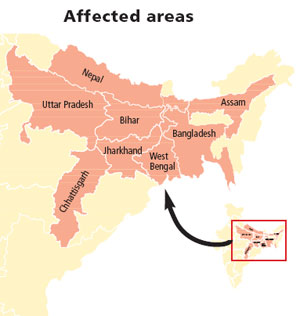 In 2009, the state government entrusted its Public Health Engineering Department (PHED) with the construction, operation and maintenance of ARUs. In villages, it asked panchayats to handle water distribution.

As per the plan, the state government will set up 338 ARUs to clean groundwater. For surface water, or river water, conventional methods will be used. River water usually does not have arsenic and can be treated conventionally through sedimentation and chlorination. Of the Rs 2,100 crore allocated for the plan, Rs 974 crore will be spent on seting up ARUs.

PHED will set up ARUs in tubewells that can cater to about 5,000 families. An equipment installed in the tubewell performs the initial cleaning with alum or bleaching powder, and passing the water through a layer of hematite, a form of iron ore. Water then flows into another chamber where arsenic is separated through sedimentation. In the third chamber, filteration of the remaining arsenic is done through a sand bed. Clean water is then ready for use.

Setting up one ARU can cost up to Rs 70 lakh. However, its running cost is only about Rs 10 per kilolitre. “ARUs last long and are most effective in removing arsenic from water,” says Arunabha Majumder, member of the West Bengal Arsenic Task Force. Water thus treated has arsenic content less than 10 ppb, safe according to the World Health Organization and the Bureau of Indian Standards (BIS). BIS has set 50 ppb as the acceptable limit.

Many households have installed smaller and cheaper versions of ARU. Majumdar gives the instance of a homegrown version of filter that uses bleaching powder and alum, which are easily available. Bleaching powder oxidises arsenic and alum acts as the coagulating agent. Water is then passed through a sand filter that adsorbs any residual arsenic. The filter needs to be changed once every three years.

According to studies conducted by the Swiss Federal Institute for Environmental Science and Technology, the Hanoi University of Science and other Vietnam government departments, such filters are foolproof if changed before their efficacy expires. 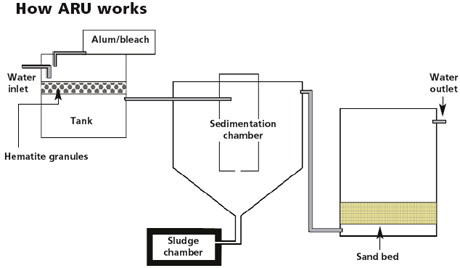 Another simple option is the single stage filter, developed by the department of sanitary engineering of All-India Institute of Hygiene and Public Health in Kolkata. When alum is mixed with water, it separates iron and arsenic from water. These are allowed to settle and the filtered water is ready to use.

Yet another method treats water by use of bleaching powder, aluminum sulphate and activated alumina. The residual arsenic-rich sludge has to be removed periodically in this process.

These smaller technologies are being used across the state, but the government finds it difficult to monitor each one from time to time. The government, therefore, plans to improve technologies of the existing methods.

While West Bengal has taken baby steps towards controlling arsenic, no state is working towards it. Bihar has not gone beyond preparing a sketchy plan. “Nothing concrete has happened,” admits Prakash Kumar, adviser to the Bihar government on rural water and sanitation. The state government, along with Unicef, had installed some ARUs and started rainwater harvesting for dilution of arsenic content in groundwater, but with limited success.

Ashok Ghosh, head of environmental science department at Anugraha Narayan College in Patna, attributes the failures to inadequacies in public participation. The units were abandoned within months, he says.

In Ramnagar village, 20 kilometres from Patna, Unicef had installed solar-powered pumps in many dug wells to provide arsenic-free water. “But the pumps broke down within months because the operators were not trained to operate them. They are expensive and were stolen,” says Dhirendar Kumar, student at Patna University researching on arsenic mitigation in the state.

ARUs can be made effective by devising standard operating protocols for their operation, maintenance, safe disposal of waste and regular testing of raw and treated water, says Prakash Kumar. Panchayats and the community should be properly trained for this, he adds.

In March 2011, A N College set up an ARU in Ramnagar. Ramkishan Singh, outside whose house it has been set up, was trained to look after the unit. “I see to it that the unit stays operational so that my family and others in the village get arsenic-free water.”

Such efforts indicate that the seriousness of arsenic contamination in groundwater is being recognised. What is required is to make its mitigation a success by involving the public in planning and maintenance, while also giving other states the necessary push.