Traditional shallow wells can supply arsenic-free water. All one needs to do is install it with caution 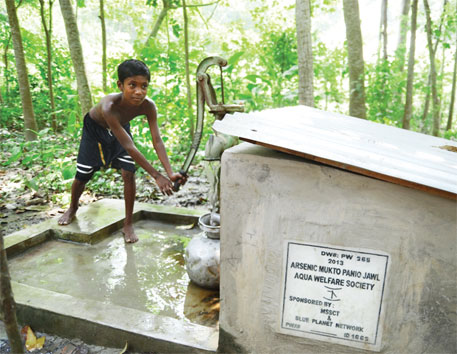 Despite fatal consequences, about six million people in nine districts of West Bengal depend on arsenic-contaminated water. This colourless and odourless chemical is known to cause cancer, respiratory diseases and even heart attack. Millions of rupees have been spent to supply arsenic-free drinking water to the affected regions. The most common method is to set up treatment plants by using technologies like filter-based adsorption, ion exchange and coagulation. But these are expensive and maintenance requires expertise, often a challenge for affected communities.

To provide a cheap and hassle-free technology, US-based non-profit Project Well has introduced a modified version of traditional dug wells in two affected districts, North 24 Parganas and Nadia. Dug well, or kua as it is called locally, was once ubiquitous across the coastal state. Over the past five decades, they have been replaced by deep tube wells over concerns that water from shallow aquifers easily get contaminated with surface runoff and coliform that causes diarrhoea. Over-exploitation of groundwater instead compounded the problem of arsenic contamination. “The unconfined top aquifer is free of arsenic contamination and gets recharged by surface and rainwater,” says Meera Smith, founder of Project Well. The non-profit uses its modifed dug well technology to tap water from this aquifer, but with caution. It sinks the well through boring. Skilled well diggers then cut the inserted PVC pipe and stack concrete rings around it until the height of the cylinder reaches 5 m. If the site is in flood-prone area, the height of the cylinder is kept 60-90 cm above the ground to prevent contamination from surface runoff. Local masons then construct a platform next to the well and cover its mouth with a roof and a nylon net to protect the water from getting dirty. A hand pump attached to the dug well extracts the well water. The well water is then treated with theoline, a chlorine-based disinfectant, for a month. It is declared fit for consumption only after laboratory tests show that the water is free from both arsenic and coliform.

So far, Project Well has installed over 200 dug wells in West Bengal through its partner Aqua Welfare Society. In Keota village of North 24 Parganas, over 80 families draw water from the well. “We need another well as people from neighbouring villages also depend on it,” says SwarupSarkar, whose house is next to the well. “No one wants to drink water from deep tube wells as most of these are contaminated with arsenic,” he adds. Biswajit Karmakar of Aqua Welfare Society says village plumbers easily install the modified design, which costs Rs 36,000. Maintaining the well costs barely Rs 50 a month.

The technology, however, has its own set of challenges. Dug wells dry up during summer months as they tap water from the top aquifer. About 10 per cent of the wells installed by Project Well faces this problem. “Bacterial and pesticide contamination cannot be ruled out in dug wells,” says Anirban Gupta, faculty at Bengal Engineering and Science University. Gupta is part of a team that developed a filter-based technology to check arsenic contamination. The filter uses granular alumina to remove arsenic and is attached to hand pumps. It costs Rs 75,000 and requires regular maintenance.

Smith says none of the wells installed by the non-profit has reported bacterial contamination yet. “We have not tested for other contaminants due to lack of funds,” she adds.

“A probable solution is to use a mix of both dug well and filter-based technologies,” says PradipSen Gupta, formerly a geologist with the State Water Investigation Directorate.