Why are companies across all product categories 'nutracising' their brands? Obviously, to catch a huge market -- growing by the day -- for health and dietary supplements 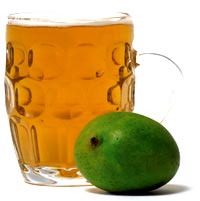 HERBAL BEER
Looks, smells, even tastes like it. But is it beer?

WHAT GOES IN? Pub-crawlers beware, herbal beer is just raw mango mixed with herbs (Andrographis or kalmegh and Tinospora or guduchi), fermented for a week. Besides mango (Mangifera indica), other fruit such as amla (Phyllanthus emblica), guava (Psidium guajava) and oranges (Citrus spp.) can also be used as raw material. The product has been created at a research institute

NUTRA ELEMENT Guduchi is good for the heart, diabetes, blood pressure, leprosy and piles. Kalmegh is a traditional health booster that increases immunity, is effective against fever and acts as a liver tonic. Kalmegh is also used in herbal beer to simulate the bitter flavour of hops. Herbal beer is supposedly high in antioxidants, relaxes the heart and the digestive system, is a diuretic and also protects against gastro-duodenal ulceration. Tests on liver cell lines have shown that cells thrive with herbal beer while most die with regular beer. The product is a thirst-quencher with a pleasant aroma

STATUTORY WARNING Although it is called herbal, the alcohol content in this beer ranges between two and eight per cent, which is around the same as in some regular Indian beers

SOY
PRODUCT FEATURES Products include tofu, soymilk. US soy food market worth US $3.2 billion and is growing by 15 per cent each year

CREATINE POWDER
PRODUCT FEATURES Sports-enhancer: based on the theory that creatine levels in wild animals are higher than in captive ones

SPIRULINA
Sprinkle the powder on your rasams and soups and even garnish your cooked veggies with it. Add it to homemade biscuits, burfi or murukku. Or take the easy route and just pop a spirulina capsule. It's also a terrific idea to try a lassi garnished delicately with spirulina on a hot day as it cools down the body

WHAT GOES IN? Blue-green algae that are a rich source of proteins (64 per cent), lipids (6 per cent) and minerals (8 per cent), including iron. Nutrients like phycocyanin, chlorophyll, carotenoids, vitamins, carbohydrates and minerals. Introduced in India in the 1990s, spirulina is one of the world's most popular health supplements

NUTRA ELEMENT Combats iron deficiency and also boosts vitamin A status (especially during pregnancy and lactation). Reduces plasma glucose level and cholesterol in diabetics, fights accumulation of fat, bronchial asthma and rheumatoid arthritis. It has even been found effective in preventing oral cancer

THE BUY BUY STATUS The product is available everywhere, in several brands. It is sold both in powder form and as tablets

GREEN TEA
Next time you need some refreshing tea, don't reach for that cup, just pop a tea pill. Yes, now there are actually tea tablets and capsules. Tea is rich in antioxidants, green tea being more potent than the regular, cured one

WHAT GOES IN? Extract of green tea (dry leaf), about 40 per cent polyphenols (active antioxidant) by weight

NUTRA ELEMENT Each capsule has active ingredients equivalent to 10 cups of tea. Antioxidants protect drinkers from different types of cancer (of the lung, stomach) and precancerous conditions. Polyphenols in it prevent mutation, inhibit tumour cell DNA synthesis and reduce production of harmful peroxide molecules. Catechins block biosynthesis of endogenous nitrosamines that could cause cancer. Other chemicals in the leaf inhibit aflatoxin- induced liver cancer. The brew or tablet is also a guard from the side effects of anti-cancer drugs. Natural antioxidants in the leaf have anti-aging properties. Polysaccharides help reduce sugar level in the blood. Pigments can prevent arteries from hardening, reduce blood cholesterol. The flavones are effective antibacterials and anti-fungals. Polyphenols have also been found effective against HIV

THE BUY BUY STATUS As tablets and tea

SLIM CAPSULES
PRODUCT FEATURES Sold as the safe, natural way to get into shape

NUTRA ELEMENT Sugarcane is rich in minerals, vitamins. Cumin and ginger are anti-bacterial, increase immunity and act as anti-emetics

NUTRA ELEMENT The rise in diabetes-statistics in India has led to the revival of this "natural nutraceutical" that's nutritious, non-toxic, easy to digest and improves vigour in diabetics. It controls blood/urine sugar levels and tackles common diabetes-related problems like fatigue, drowsiness, frequent urination, excessive thirst and hunger. It is also helpful in controlling conditions like weight loss, swellings on legs, burning feet and palms, dry skin, hypertension, blurred vision and wounds that heal slowly. In adult diabetics, oral medicine-intake was found to have reduced (by 30-100 per cent) as were insulin doses (by 10-30 per cent).

NUTRA ELEMENT Beta-carotene, vitamins B and C are complemented by electrolytes and glycogen for instant energy

NUTRA ELEMENT Regular use boosts blood supply to joints for cartilage repair and mobility, arrests inflammatory responses like pain, swelling. Can be taken over long periods without gastric irritation and is not toxic to liver or kidney

CAROTENOIDS
PRODUCT FEATURES Sourced from Dunaliella salina, a saline water alga. Used as a powder or an oil. Rich in carotenoids such as beta carotene, alpha carotene and xanthophylls like zeaxanthin, cryptoxanthin and lutein

NUTRA ELEMENT These chemicals are the best kind of antioxidants