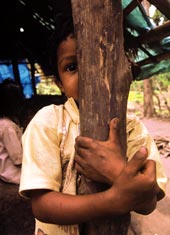 There exists a document called Linking Biodiversity Conservation and Rural Livelihoods. It is the Indian government's initial salvo for a new eco-development project, expected to begin late 2005. It will cost approximately US $48 million (Rs 220 crore), with beneficiaries putting in US $2 million (Rs 9.20 crore). The remaining costs will be split three-way between the government, the Global Environment Facility/World Bank and a soft loan service of the International Development Association.

This six-year project will work on "new approaches to participatory management". It will expand "lessons" to five or six other globally important sites" in the country, to strengthen linkages between conservation and improving local livelihoods, as well as enhance the national economy.

The new initiative has its eyes set on "landscapes" much larger than two-km PA peripheries, on areas 1,000-2,000 sq km (100,000 ha-200,000 ha) around PAs. The justification: biodiversity pools can only be managed at such large levels. "The project shall work in tandem with non-forest areas, revenue villages and other land use systems as well as corridors for biodiversity," says Michael Jansen, senior environmental specialist, World Bank, Washington DC, USA. It will work with other rural development-related departments and ministries.


Question is: have IEDP lessons been conned? Or will the same awry vision determine how people will co-exist with wildlife? This magazine had warned that, in its original shape, all PAs could not afford eco-development. The first problem of forest-based people was not poverty, but disempowerment. The erosion of rights to use their habitat alienated people, hiking transaction costs for protection. The project would end up fattening the wildlife bureaucracy, unless there was some hard-headed thinking on how people living in forests could co-manage its biodiversity treasures and equally participate in its development.

The current eco-development mentality is quite visible in India's national wildlife action plan. In the case of communities living in and near forests, the government must do the following. One, compensate poor communities for the damage caused to life and property by wild animals. Two, make a "conscious" effort to ensure that, "as far as possible", relocation must be done in a "participatory manner". Three, people should be assisted to find alternative options, "outside the protected area".

But is this strategy adequate for a country where forests are habitats of poor communities? Or does the policy and practice need to change so that there is local control and ownership over the idea and its implementation? As Down To Earth's founder-editor Anil Agarwal put it: "Why is it that after undergoing all the stages of metamorphosis, the wildlife bureaucracy ends up as a caterpillar and not a butterfly?" Will this project be different?


So far, convenience rather than scientific rationale has led the process of project design, research as well as impact monitoring. This time, government will clearly have to share with all stakeholders the logic that drives the project: selecting a site, or fixing a landscape's boundary. The PAs to be invested in need strict peer-reviewed ecological baselines. The government must fit its project into what the PA needs, and not the other way around.

Doubts are already surfacing about how the new project will demarcate a "landscape" that affects a set of PAs, how it will de-limit project boundaries. The Bank says the limit will be drawn upon practicability of operations rather than theoretic landscapes. But in a liberalised economy physical boundaries rarely matter. Economic influences that affect the health of the forests cross over "landscapes" with ease.

In the selection of sites the Bank wants to work with high biodiversity zones, but those that offer only low or medium risk. "In sites where the risks are too high, we would prefer NGOs to invest their resources," says Jansen. What about government? The Bank is keen upon private-public partnerships too (corporate investments); does the government wish it too?


In the last two projects the government created an alternative delivery mechanism. It skirted around the existing structure of Panchayati Raj institutions. Does it intend to create similar vehicles of delivery under the new project, given that its "landscape" ranges over much wider ecological and social space -- up to 2,000 sq km? "We shall have to work at three levels depending upon what kind of area we are working in. Gram sabhas at one level, joint forest management committees at the second and EDCs at the third stage," says Rajesh Gopal, project head of the Indian Eco-development project.

Moreover, with the low level of per unit area budget proposed for the entire project, what kinds of services does the government promise to create alternative livelihoods? Who will deliver them effectively? The government must lay its plan of action clearly in public domain for discussion. If the Panchayati Raj institutions and the joint forest committees are also to be involved, then at what stage will they become part of the consultations? Will they, at all?


The Periyar Tiger Reserve has set an example of how active participation of people can redefine PA management: here exists a funding mechanism where people pay for conservation while generating livelihoods. Is the government willing to learn from this model? Current evidence says: no. One round of consultation has already been held with a select group and state representatives on the project in Delhi: the public remains unaware of these negotiations. Another round is slated for July 20, when a few states will try to claim their share of the new pie. But hard questions remain unanswered.

Will the new project loosen the stranglehold of a bureaucratic forest department over PAs and make people a vibrant partner? Conserving a rich biosphere is important. Equally important is people's marginalisation and poverty. The government must try out alternative mechanisms. In this respect, surely, the answer lies in building economies out of forests, in this case PAs. Economies out of park protection, nature tourism, out of making natural resources marketable in a way that profits accrue to local populations. Does the government have the gumption to help build capacities among people -- so that they co-manage forests using their traditional knowledge? Does not the key lie in making local people custodians of PA management?

If the government is not willing to draw a wider agenda, it will merely repeat mistakes. Then people don't want the loan. Nor do the forests. If the experiment is not going to give people a role, then the experiment is a convenient excuse to get more funds. The government needs to make it empathically evident what it has to offer. And this time the people should decide, before the bank does, if the loan is worth it.

With inputs from Vikas Parashar.