How consumers were won

How consumers were won 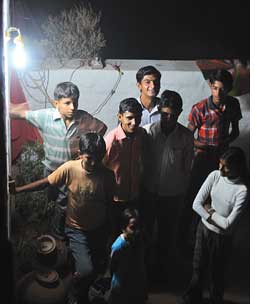 The Bureau of Energy Efficiency, state electricity boards and electricity supply companies are responsible for popularizing cfls in India. "Government-sponsored, energy-saving schemes have increased awareness to a level that every electricity consumer in the country knows that cfls can drastically reduce his or her electricity bills," said Bibison Baby, project manager with Market Pulse, a market research and monitoring consultancy.

Price remains the biggest constraint for the cfl industry. Although the prices of cfls are down by over 50 per cent since 2001, they cannot compete with cheap incandescent bulbs. At Rs 15, a 60-watt incandescent bulb is five to 10 times cheaper than an equivalent good quality cfl costing Rs 75 to Rs 150.

For commercial establishments and urban consumers who consume more than 100 units of electricity per month, it makes sense to switch over to cfls. For such customers the reduced electricity bills will make up for the cost of cfls. But there is a sizeable population of consumers who consume less than 50 units per month and do not pay more than Rs 100 per month as power tariff. Prayas Energy Group, a Pune-based advocacy trust, estimates that 25 to 30 per cent of the 200-million-plus households in the country use less than 50 units per month. For such consumers, cfls either have to be provided free of cost or at the cost of incandescent bulbs. The Bureau of Energy Efficiency's Bachat Lamp Yojana may take care of this problem to an extent.


The Bachat Lamp Yojana launched nationwide on May 28, 2007, envisages distribution of cfls costing about Rs 100 per piece to a target population at the price of an incandescent bulb, Rs 10-15. The deficit will be recovered through certified emission reduction under the clean development mechanism (cdm) of the Kyoto Protocol. cdm allows emission-reduction projects in developing countries to earn carbon credits.

The bureau hopes to populate 400 million house connections in the country with cfls. The scheme will be first launched in Yamunanagar in Haryana and Visakhapatnam in Andhra Pradesh in early 2009. Under it about 650,000 bulbs in each city will be given at the reduced price. The Visakhapatnam project aims to reduce power consumption by 60,000 mwh in a year, and eliminate 383,342 tonnes of CO2 emissions. The participating vendor in both the cities, Osram will spend 20.64 million (Rs 135 crore) on distributing cfls, while hoping to get back 38.33 million (Rs 253.3 crore) as carbon credits.


The Himalayan state has the country's most ambitious cfl programme the government buys massive quantities of these efficient bulbs and distributes them free to each household in the state. It hopes to recover investment through carbon credits and the sale of saved power outside the state. In November 23, 2008, the state introduced the Atal Bijli Bachat Yojana to give each household in the state four cfls--it involved a total of 1.6 million households and an order of 6.4 million bulbs at a cost of Rs 65 crore. Under the scheme, domestic consumers who do not have arrears with the electricity department can go to the local sub-station and get a packet of four cfls, containing two 15-watt and two 20-watt bulbs.To get the new bulbs they have to bring an equal number of 60-watt and 100-watt incandescent bulbs, and their last electricity bill.

The scheme was delayed for some months because the four big bulb companies, which passed the technical evaluation process, formed a cartel and quoted similar prices in their tenders over Rs 400 for each packet, explained an official of the state electricity board. Another problem the state faced was to decide on the specifications of the bulbs. The state wanted to specify that it wanted cfls with a power factor of 0.85, so that it could get the most efficient option. Power factor is measured on a scale of 0 to 1. Bulbs of low power factor increase transmission and distribution loss (see power factor). "None of the major brands could comply with this specification because they only produced cfls with a power factor of 0.5," added the official. The problem was compounded because the efficiency specifications being framed by the Bureau of Indian Standards, which asked for 0.85 power factor, were to come into force by January 2009. The companies cried foul, arguing that the state was asking for higher than required standards. But the state stuck to its guns.

In September 17, 2008, the first tender for the bulbs were cancelled because of the high price. When the new tender was floated, HP Socomec, a Delhi-based electrical equipment manufacturing company, was found to be the lowest bidder. After negotiations, the price was agreed at Rs 387 per packet. As Phoenix Lamps agreed to match this price, the order was split between the lowest and the second lowest bidder, with Socomac getting an order of 4 million and Phoenix 2.4 million cfls. The tender also asked companies to provide a minimum warranty of 18 months on the cfls and made it mandatory for suppliers to have adequate disposal and recycling facilities to treat defective, damaged and expired cfls.

The scheme is now being implemented in different parts of the state. The government's calculations are based on the savings it will make through the use of these efficient appliances; it estimates a reduction of 270 million units of power in the domestic sector, which it can sell to industries currently barred from operating during peak hours because of power shortage. It says in terms of energy savings, household consumers can expect a reduction of 15-20 per cent in their electricity bills, saving 150 mw during peak hours. The government expects to earn about Rs 90--100 crore a year by selling the saved electricity.

The Himachal Pradesh government has also applied for carbon credits under cdm. The state electricity board in its background document estimates that the cfl scheme would be entitled 188,496 certified emission reductions, which can generate Rs 20 crore annually. It now hopes to light up the state and make it green as well.


Sirsa in Haryana is the first district in the country to switch over to the cfl -based lighting system. Apart from a few establishments that require incandescent bulbs, like welding shops, Sirsa completely switched over to cfl on August 15, 2007. Six months ago, electricity provider Dakshin Haryana Bijli Vitran Nigam introduced a scheme based on selling cfls at half the price printed on the packaging. cfls of capacity 11 watt, 15 watt and 20 watt were sold at Rs 67.50, Rs 75 and Rs 100 respectively. The Nigam set up 100 teams and launched a door-to-door campaign to persuade people. Nigam officials were accompanied by sales representatives of the vendor companies who sold cfls on the spot.

The Nigam used the wide dealer margins to reduce the cost of cfls. A ready-to-use cfl of 15-watt capacity costs Rs 55-60 after excise and freight duties are paid. Before it reaches the customer, cfl travels through the super-stockist, stockist and the retailer. At every level the price increases by 10-15 per cent. "When it reaches the end user, cfl's cost is 50-60 per cent higher than the factory price," said Nitin Sharma, the sales manager of Finolex that offered a similar discount in Delhi between June and December 2008. "The cost of a cfl with the printed price of Rs 100 can easily be brought down to Rs 65 if it can be sold directly to the consumer."


It was one of the first states in India to start cfl schemes to reduce domestic power consumption. It faces a load shedding of 4,500-5,000 mw. Under pressure from the Maharashtra Energy Regulatory Commission (merc) and some non-profit groups, power utilities, including the Maharashtra State Electricity Distribution Co Ltd (msedcl) and Reliance Energy, were a year ago forced to introduce measures to cut down power consumption.

A few cfl -based pilot projects have been undertaken in some cities, but these are yet to be launched at the state level. One big reason behind the delay is the proposed Bachat Lamp Yojana, under which cfls will be sold at a subsidized price. "Subsidy or no subsidy, cfl distribution projects must carry on because the cost of inaction is high. cfls have the potential to save 10,000 mw in India if all the existing and to-be-connected residential consumers replace one 60-watt bulb with 15-watt cfl," said Girish Sant, a member of Prayas.

msedcl, India's largest distribution utility, undertook a cfl distribution project in Nashik between November 2005 and June 2006. The aim was to save 10 mw by installing 0.3 million cfls. Asian Electronics, Osram and Hollonics won the contract to supply cfls at Rs 100-110 per piece. msedcl only acted as a facilitator and recovered the cost of cfls from consumers. On merc's directions, Prayas evaluated the project and found that against the target of selling 300,000 cfls, the project led to the sale of 379,872 cfls. Prayas estimates that it led to an annual saving of 12-16 million units. The pilot project, however, failed from the perspective of cfl quality.

Reliance Energy also launched a pilot study on cfl distribution in Mumbai in December 2005 and then a scheme, under which 415,929 cfls were sold. Reliance's calculations indicate the resultant load relief could be 2.2 million units per month. msedcl and Reliance schemes have been discontinued in anticipation of the central scheme.