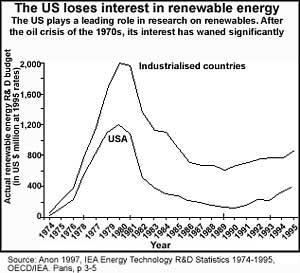 Fuel cells promise a lot, but there is little hope if shortsighted business interests get the better of policymakers. For one, fuel cells will eat into the earnings of oil companies. The June 1999 issue of the Fuel Cell Bulletin quotes the oil consultancy Kline & Co as saying that "the industry can expect a 30 per cent decline in demand for lubricants by 2015 as a result of fuel cell cars". The bulletin also notes that lubricants "contribute substantially to the downstream profitability of oil companies".

Obviously, oil companies have a problem with renewables like fuel cells. Moreover, even if oil companies take interest in fuel cells, there is no guarantee that it will be for the cause of lowering greenhouse gas emissions or reducing air pollution (see box: " Which fuel for my cell").There are indications from
the us , the most industrialised country which would be expected to propel the big arrival of fuel cells, that the nexus between oil companies and politicians lies in the way of promoting clean technologies like fuel cells.

In the last week of June 2000, The Washington Post reported that the debate in the us presidential fray "began to shift from a focus on the role of the Clinton-Gore administration to that of major oil companies". Al Gore, us vice-president and the Democrat presidential hopeful, and George W Bush, the Republican candidate, were levelling allegations against each other of supporting "Big Oil", which is being blamed for a rise in petrol prices. Gore has proposed a 10-year, us $150-billion energy programme that would provide tax breaks and grants to promote cleaner uses of energy and to stimulate domestic fuel production. Also proposed were subsidies worth us $48 billion for energy savers. His commitment to renewable energy will be closely watched if he gets elected. The amount of money put into r&d of renewables depends on governments (see graph: The us loses interest in renewable energy ).

The political nature of the situation is explained in great detail in Green Politics, the first report under the Global Environmental Negotiations (gen) series brought out by the New Delhi-based Centre for Science and Environment. "Government r & d investment in renewable energy in recent years has been extremely poor and has been falling," the report indicates. "A tax of us $5 per tonne of carbon (an equivalent figure calculated to represent various carbon emissions) will increase the price of oil by just us $0.65 per barrel but it will generate us $10-15 billion in the us alone, which could be used to fund research in alternative energy," the gen report argues.

The report emphasises that governments have to create bith demand and supply of renewables through fiscal incentives. The steep costs of the initial phases are followed by "more modest improvements after commercialisation". The pattern of all new technologies is that with increasing experience, called 'learning', the law of diminishing returns sets in. A modelling exercise has already shown that fuel cells and photovoltaics could dominate electricity generation by 2045 and they will cost the lowest as compared to the alternatives (see graphs: Time to 'learn' clean energy is now or never ).

Instead, if the 'learning' rates are low, these promising technologies could get 'locked out' of the market by the existing fossil fuel technologies. The report stresses that it is best to make early and dedicated investments in photo-voltaics and fuel cells. Several studies show that renewables have already reached a stage where they can take off with government support. The time is now, or never. Else the future will get locked out.