A US $67 million question: how would the eco-development project money be spent? 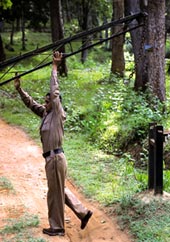 The Union government hired the Indian Institute of Planning and Administration (IIPA), New Delhi, to chalk out an 'indicative plan', a proposal submitted by the government to the World Bank to launch formal negotiations, which the department of economic affairs took up with the Bank in 1994.

The government finally selected and proposed seven sites for IEDP. All but two were tiger reserves (see map), receiving more money than other PAs under Project Tiger, a project of the Union ministry of environment and forests. The exact purpose of IEDP was delineated in the Bank's Staff Appraisal Report formalised by the contract cleared by the cabinet committee on economic affairs and finally signed between the government and the Bank (but see: Before bust).

The project had five basic objectives:

VILLAGE ECO-DEVELOPMENT: to reduce negative impacts of 'local people' on PAs and vice versa. This involved participatory microplanning of activities at village level, to help villages and the forest department decide a set of reciprocal promises. The forest department would provide alternative livelihoods and the people would commit to help the department in better managing and protecting the forest. Eco-development also meant so-called special programs, including the 'option' of voluntary relocation and other 'investments' to benefit people and biodiversity

GENERATE SUPPORT FOR PA MANAGEMENT AND ECO-DEVELOPMENT: environmental education and visitor management at the parks. But more importantly it promised funds for impact monitoring and goal-oriented ecological and social science research.

PREPARE FUTURE BIODIVERSITY PROJECTS: the premise here was that IEDP could spawn similar practices across India. One optimistic Bank document put the possibility of more than 200-300 of India's 500-plus PAs replicating the experience.


The money came from five sources. In official jargon, this was an externally aided Centrally Sponsored Plan Scheme. It was partly financed by an International Development Association (IDA) loan, and partly by a Global Environment Facility (GEF) grant. The Union government added its share, as did states where the seven sites were located (see table: In...Out).

The project envisaged its beneficiaries -- people as stakeholders -- would contribute 25 per cent of the money for the village eco-development component. The total cost of IEDP was US $67 million. A whopping Rs 288.79 crore.

The agreement with IDA and GEF was signed in September 1996 and the World Bank made the project effective from December 1996. The project was to run for five years, but after a review the Bank decided to extend it by two years in five sites and by one year at Nagarhole National Park.


The plan envisaged a secretariat at Delhi with a board with statuatory powers to overlook implementation. An advisory council was to help in technical matters. In states, the wildlife wing of the forest department was in charge. All funds to PAs were routed through state governments. The Bank reviewed the project periodically, usually sending two review missions to selected sites each year.


On the ground, the plan covered people living inside forests and those in the forest fringe. An 'impact' area, radiating two kilometres from the relevant park boundary, was taken as the project's work limit. All villages falling in this zone were targeted for eco-development activities. For which, eco-development committees (EDCs) comprising villagers -- and forester, or guard, as the officiating secretary -- were formed. The president was elected from EDC members.

The EDCs, and the forest department and NGOs, had to develop a microplan, on the basis of a villagers' wishlist, to generate alternative livelihoods. The EDC would undertake these activities annually with project funds.

Each EDC member was to receive Rs 10,000. Each beneficiary would contribute 25 per cent of the costs, or Rs 2,500. The money could then generate, as the Bank and the government put it, livelihoods reducing the impact of people on the forest. In return, EDC members had to reciprocally commit to help protect the forest: among others, helping department frontline staff in patrolling; gathering intelligence on poaching; preventing cattle from grazing in the parks, and whatever else the forest department suggested. In practice, all these could happen only after mutual agreement among all stakeholders.

On its part, the forest department would improve its functioning, so better protecting the PAs: project funds allowed purchase and construction of infrastructure and better equipment for PA officers and staff (computers, boats, GIS softwares, vehicles).

How it actually unfolded over the next seven years, though, is another project in itself.