The zabo is the chosen water harvesting system of the Chakhesang tribals of Nagaland's Kikruma village. Placed by fate in the rain-shadow of a mountain receives 1,613 mm of average annual rainfall. The Chakhesangs have found a way out of their water shortage problems by literally 'confining' - impounding -the precious resource 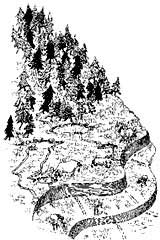 KIKRUMA is a nondescript village in India's remote northeast, inhabited by the Chakhesang tribals. Located at an altitude of 1,270 metres (m), 13 km from Pfutsero town in Phek district of Nagaland, the village comes under the town's rain-shadow. The entire village is situated on a flat ridge bounded by two seasonal rivers- on the south by the Seidzu, and on the north by the Khuza.

Necessity is the mother of invention, and the Chakhesangs illustrate the dictum fully. Beset by a perennial shortage of drinking water brought about by the village's location as well as the seasonal nature of its rivers, they have devised their own time-tested way of cultivation called zabo. Also known as the ruza system locally, zabo means impounding water. According to a report in the Indian Joumal of Hill Farming, this indigenous system is "a combination of forest, agriculture and animal husbandry with a well-founded conservation base, soil erosion control, water resources development and management and protection of environment".


Over the years, the Kikruma community has evolved an elaborate water harvesting arrangement whose various comments interface to produce an efficient land-water management system. Protected forest lands, on hilltops act as catchments; ponds are dug in the middle where water is harvested through inlet channels from the catchment area; and, terraced fields are laid below them.

The ponds are Kikruma's unique feature. Spread all over the village, they numbered about 150 in 1995. They are constructed in such a manner that surplus water from one pond flows down to the pond below. Water is released from a pond through an opening at its lower end, which is otherwise blocked by a piece of wood. The ponds dry up by March or April and this dry period is used to repair them.

At one site close to the village, the existing pond is owned by five persons who cultivate the adjoining fields. Two channels, each over a kilometre long, drain water from the surrounding areas into the pond. The villagers have made the channel compact by hammering its base, thereby reducing water percolation. When water is required for paddy transplantation, they dig a hole at the base of the pond.


Kikruma's water conservation method saves even the water flowing along the steep approach road to the village; it is then directed to the ponds and utilised for irrigation. The villagers build a series of speed-breakers on the road, which block the runoff at about every 10 m. The water drains into a channel along the roadside, and takes a right-angle turn when blocked by a stone. From there, it is channeled into the ponds. The sharing of this water between different families or clans is through mutual negotiations. Sliced bamboo strips aEe also placed along the hill slopes to drain water into a pipe that goes below the road and empties into the channel on the other side of the road, before being diverted into the fields.

In terrace cultivation, after the water reaches the fields, human feet churn the soil into a thick slush. Water flows from one plot to the other through passages which-arc designed to retain about 15 cut of water in the fields; the same arrangement exists in the last plot before the excess water is let out. In terrace cultivation, the sowing season generally lasts from April to May and transplantation is done in June and July. Water is allowed to remain in the field for the whole period of plant growth, and sometimes drained out just before harvesting.

Apart from the springs which are also tapped for irrigation, there are a few small natural tanks. These tanks collect rainwater and people occasionally grow vegetables on their banks. Springs and streams are the main sources of water for domestic use. Care is taken to protect these water sources by allowing undisturbed growth of natural vegetation and banana trees - which are believed to be water-retentive - on their banks. Bathing or washing of clothes is strictly prohibited in these sources.


In Kikruma, the use of water for irrigation is governed by rigid rules. The Sedzu river's waters are mainly used for irrigation. As this is a seasonal river, water is almost always in short supply; hence, the right of prior appropriation operates.

Once a person has tapped the river at one point, nobody is allowed to tap the river immediately above; the tapping is permitted at a distance of two furlongs above. However, no restriction operates on tapping the river immediately below. The laying of a channel is also governed by certain rules. For instance, a person from a different khel (village) would not be permitted to take his channel through lands belonging to another khel.

A different combination of water rights may be worked out by the villagers in case the source of water is a spring. If a spring exists on a particular terrace which is yet uncultivated, a person below it would be entitled to use it to develop his terrace. But in case the owner of the uncultivated terrace decides to develop his terrace at some later date, then the two will share the water equally. In general, the rights over runoff between different terraces is respected. The person at the top end of the terrace cannot harness what is legitimately the runoff right of those below. Maintenance work on all channels and catchment areas of ponds is done once every year, usually before the onset of monsoons. The responsibility for mobilising people to clean the channels rests with the last person tapping the channel. He is locally referred to as the neipu, which literally translates as 'the lord'.

The system's cost-efficacy also is a point in its favour. A case study of the zabo system with a 14.5 m x 8 m x 2.5 or pond and 0.4 ha paddy land, revealed that the estimated cost was about 750 persondays - equivalent to Rs 1,500. Strangely, this system of water harvesting does not exist in other Chakhesang villages. For the residents of Kikruma, however, "it has always been a part of the village".

Down To Earth will carry more on traditional water harvesting systems in its forthcoming issues. Readers are invited to send in their comments and contributions. Those interested in purchasing a copy of the Fourth Citizens' Report may Write to S Banerji, Sales Manager, Centre for Science and Environment, 41, Tughlakabad Institutional Area, New Delhi - 110 062